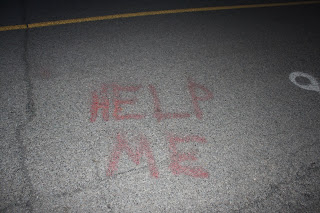 The Von Trapp Family from 'The Sound of Music' tended to make a spectacle wherever they went as they sang songs on their bikes while wearing clothes made of curtains. Oddly enough, we seem to have the same effect when biking, sans the singing and curtains.

Last year we were riding through the park when a little boy yelled, "Mom! Look at that really big family!" It's not like we're the Duggar Family. There are only 6 of us, for crying out loud. And while my husband and I might have some pounds we could stand to lose, I don't think we qualify for the words 'really big' but I could be wrong.

Today was our 1st bike ride of this season and when we headed out to gather our bikes, it was in the upper 60's, sunny, calm, and warm. It began with putting air in the tires, the adjusting of seats for growing children, and of course my husband's saws-all made an appearance as he always finds an excuse to use a power tool. Two hours later, it was overcast, gray, and a wind had picked up causing it to feel like the temperature was in the 50's, but by that point, bailing out wasn't an option.

We got ourselves lined up down our driveway in the order in which we'd be traveling before pulling out onto our somewhat busy road. My husband was in the lead, then it was A, K, me w/ C in the baby seat on the back, and Z was bringing up the rear. Away we went. Right off the bat, Z hit a skunk. Granted, it was dead on the side of the road, but the rest of us seemed to manage. A few minutes into our ride I noticed my husband pulling further and further ahead and the rest of us were stuck behind A who was pedaling feverishly but getting nowhere fast. He finally noticed and pulled off into a ball park and the rest of us followed him. Once we got A's gears adjusted, he announced that we're going to 'ride around the block.' We've lived in this house, way out in the country, for 5 years and not once have I ever heard the word 'block' used. But he seemed pretty sure of himself.

Here's a clue for future reference.....if in order to go 'around your block' you have to cross over 2 sets of railroad tracks and all of the roads you'll be taking start with the words 'County Road' and end in a 3-digit number, and one of those roads is made of mostly dirt with bits of gravel, it ISN'T a 'block!' It's a road trip, and you should pack a lunch and bring your GPS. By the time we passed the words 'Help Me' spray painted on one of the roads, it was too late to turn back. (Clearly someone else has been around this 'block').

Somewhere in the middle of our journey, Z decided he needed to be directly behind his dad. (Something about 'drafting'). That's when we realized the skunk he hit still had some stink left in him. K was doing really well following behind Z and I was riding along gritting my teeth as I listened to C sing one line out of a worship song from church. (The real version: "Oh no! You never let go! Through the calm and through the storm." C's version: "Oh no! You better let go! Through the barn and through the snow!") Cute at first, but by mile 7 I'd had enough. And when I glanced back at poor A, she looked like the guy in 'Dumb & Dumber' with frozen snot streaming from her nose from the bitter wind that we were riding against.

Suddenly in the middle of a country road I saw something fall off the bottom of my husband's bike and his chain followed behind. Are you kidding me?! It was unrepairable and he would have to walk his bike the rest of the way. A was relieved and wanted to walk her bike home too. That left Z, K, me and C to forge ahead. On the way home we passed the sign that announced we were 'Entering' our County. We left our county?!?! I sent the kids inside and told Z I was gonna take our truck, that has 190,000 miles on it, to pick up the rest of my family. He asked, "Oh, did dad get the brakes fixed?" (Insert crickets chirping here....) Turns out, I didn't have to worry about the brakes because the truck died every time I pressed the pedal. I finally found my stray bikers, picked them up and we were on our way home when my husband told me that I should slow down. Why? Because the hood wasn't latched from where he was working on the brakes a couple months ago......

I'm pleased to say we all arrived home safely a mere 3 hours after our journey began. I started dinner and sent my husband up to the little market to get taco shells and all was well......until he got home and asked me why I didn't tell him I put our Census form in the mailbox to mail back....turns out he decided to stop and 'get the mail', thought it was for him, and opened it up, destroying the envelope in the process....Dude, if the red flag on the side of the mailbox is pointed up, it's contents are not for YOU to pick up....I realize it's only 6pm, but I think for everyone's safety, we should go to bed now and call it a day.
Posted by ~Sassy~ at 2:22 PM