The long awaited time has come.  And when I say long awaited, I don't mean the 9 months since scheduling the tummy tuck.  I'm referring back to 2001 when I made a goal:  "Lose the extra hundred pounds, keep it off and maybe someday I'll get a tummy tuck."  I've spent the past 6 years trying to prove to myself that I'll keep it off.

There have been a few people who know my struggles with body image issues that have wondered how I can blog this process.  I'll address that below, but I think it's important to keep in mind that I wouldn't be taking 'Before' pictures of my saggy stretch marked belly without operating under the assumption that the 'After' pics will be a vast improvement.  Note that I won't be posting any shots of myself from behind.  I'm not completely insane.

Similar to my other recent adventures, I approached the tummy tuck with research.  It started with phone calls a couple years ago asking the simple question of cost.  Ron and I had an amount in mind that we'd be willing to pay, but everyplace I called was significantly higher than that.  Door closed.  Wasn't meant to be.  I accepted that and moved on, until last December during a conversation with a friend.  Her husband overheard me mention the prices I'd been told.  Having a job related to the medical field, he referred me to Dr. Troha, and gave me a rough calculation as to how much he charges.  Extremely close to our price range.

*Regarding the cost of my procedure, it's not a secret, but I won't be listing it here.  Anyone seriously interested in that information for themselves can ask me privately or consult the doctor directly.

Next step:  My initial consult.  I no sooner got taken back to an exam room and pulled my gown over my head, then had to go to the bathroom.  The mental debate began.  Sneak to the restroom down the hall wearing an open backed gown or hope we make it through the appointment without him pushing on my stomach...cue the James Bond music as I crack the door open and peek my head into the hall.  Everything went according to plan until on my way back when I walked into the wrong exam room to find the doctor with another patient, gasped and darted back to my room, where I sat trying to look casual when he walked in.
Hey stranger, long time no see.

The actual exam was simple and painless.  The doctor is really nice and patiently answered all of my nervous questions, although when I enquired about a partial tuck he could have at least acted like that was a good idea instead of quickly telling me that my stomach is the perfect candidate for the full shebang.
Okay, he said it much nicer than that and explained that for the relatively minimal price difference between the two procedures, I'd be happier with the results of a full.  May as well do this right.

That was back in February and I left there under absolutely no pressure to schedule and was encouraged to take my time and think about it.  After much discussion with Ron, November was the best option in relation to both finances and work schedules.

I had 9 full months to completely immerse myself in obsessive research that started with Google, led to seeking out actual real life tummy tuck recipients, which eventually escalated to a twisted version of 'You show me yours and I'll show you mine.'  Turns out women are much more willing to show you their new belly button if you offer to show them your old one.  I also discovered that when people find out you're getting a tummy tuck, they tend to automatically look down at your stomach while you stand there hoping they don't look back up and say, "Good idea."

Most recently, my obsession turned to the dreaded post-surgical bowel movement.  I've had 3 C-sections.  I know what I'm talking about here and I predict many of you do, too.  That began the string of phone calls to the doctor's office and surgical center asking anyone and everyone their opinion on my idea of some pre-surgical laxatives, most of which were met with a resounding 'NO' and one who actually said, 'Oh Lord, No.'
Take it easy.  Never hurts to ask.

I feel like I've educated myself on the topic of tummy tucks as much as I could.  I have no idea what the journey holds or what the end result will be, but I guess we'll all find out together.  Ron has been given free reign to document the process with the camera.  We should all be terrified.  Who am I kidding...I should be terrified.

But I've done my part and now it's time to let the surgeon do his.  My post-surgical instructions consist solely of staying off my feet.  I'll be propped in a recliner, completely dependent on my family to care for each other, the house, the dogs and me for several weeks, not to mention they'll be single-handedly responsible for making the entire Thanksgiving meal for our annual Feast With Friends we host at our house the night before Thanksgiving.
Things are bound to get interesting.

So in reference to the question as to how I can blog this, I think the bigger question here is, how can I not blog this?

In the words of my doctor, "Once you hit that 4 week mark, you're free to return to a completely normal life with your family." 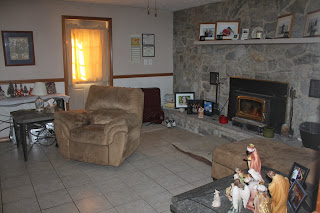