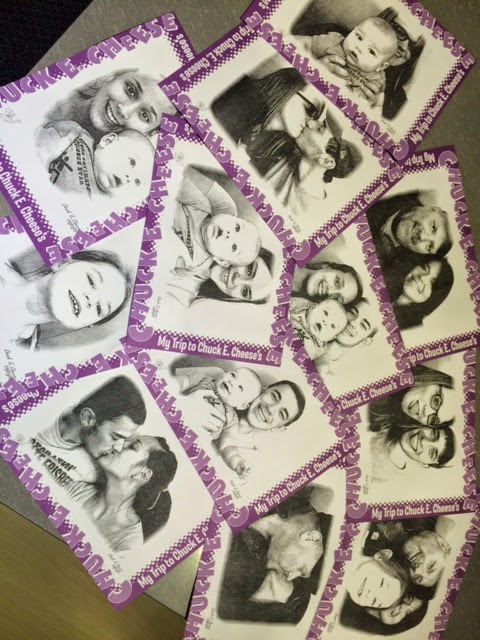 Which is precisely why I can't stand that place.

Why in the world would a mom of any children of her own, willingly subject herself to an afternoon of confinement in a hamster cage of tubes, slides, bells and whistles, with a multitude of undisciplined children and the parents who raised them, in a place that encourages everyone to loudly run amok while large stuffed animals singing on stage blares in the background?

And let's be honest, anyplace that has to stamp matching numbers on a parent's hand to ensure they take their unruly offspring home with them when they leave is not my happy place.

But hey, I also despise Disney World and anything having to do with the movie Frozen, so I'm accustomed to being in the minority, and in my family, I'm definitely in the minority.
(Flash to my husband, ringleader of all shenanigans, and major contributor to Chuck E. Cheese no longer furnishing a ball pit.)

We attend the earliest church service and arrive at Chuck E's when they open.  The kids (and Ron) make their rounds gathering all the tickets protruding from the machines where the employees started them up that morning.  We place our pizza order.  I do the mom-thing...watch a few games, take a few pictures...and then I settle into a booth with my library book.  Everybody wins.

But this year was slightly different because it wasn't about the mom thing for me.  We have a grandson now, so much to my surprise, I was all about this new grandma thing...or Sassy...which is what I'm now called.

Gone was my wish for  peace and quiet.  No, no.  Suddenly, I'm growing increasingly infuriated that the giant stuffed animals on the stage were silently pounding away on their instruments and the only sound you heard was the clicking of their plastic eyes opening and closing, because this sweet baby boy I'm pushing in the stroller is not getting the full Chuck E. Cheese experience he deserves, dammit!!

So off we went to file a complaint with the 17 year old hand-stamper who explained that sometimes the animals take a break.

Okay, she knows they're stuffed, right?  And even if they weren't stuffed, real animals wouldn't be playing in a band.  Maybe she's drunk.  So I bit back my super-witty reply and continued strollering.

Half hour later, I could take the clicking of the plastic eyes no more, returned to the underage drinker and explained that they're still not singing.  Then she replied, "You know they don't really sing, right?"
Oh, you wanna go?!  Let's goooo.

This is why we can't go to nice places.

Much to my grandson's delight, the animals eventually snapped out of their 'break' and 3 hours later we left with everyone exhausted, their bellies full of pizza, and he with his 10 dollar Chuck E. Cheese ball, purchased with $140 dollars worth of tokens. 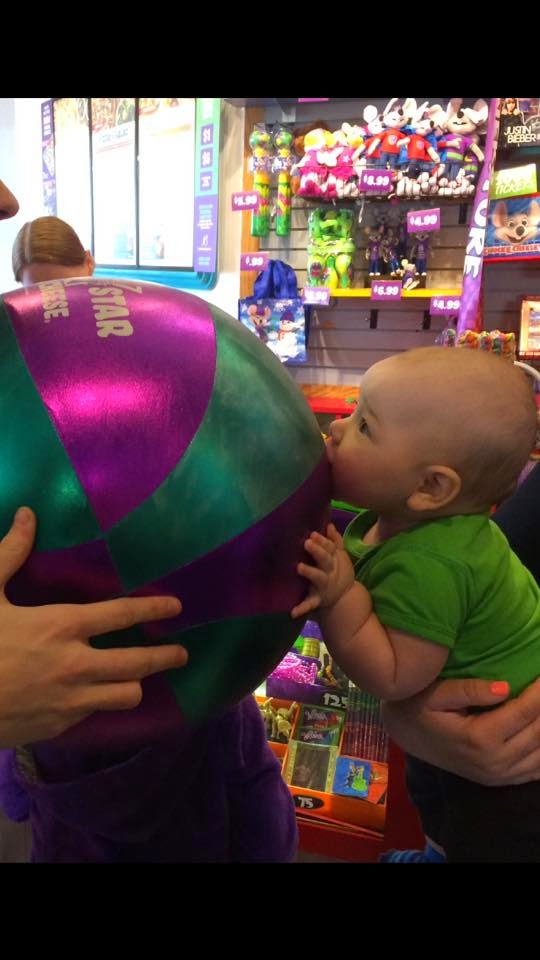