In Answer To Your Question...

There was a recent uproar in the news when a young mother in seemingly great physical shape, posted a picture of herself wearing workout gear (or bathing suit, one might argue) with her 3 young children and the caption read:  "What's Your Excuse?"

She asks women that question as if she knows them and has any right to hear their answer.  But she doesn't know me at all.  So I'm going to take a moment to introduce myself to her.  I'm the almost 42 year old woman who at one point tipped the scale at 254 lbs and who has spent the past 12 years fighting the uphill battle of the genes she was born with and the love of eating she developed along the way.  I'm the woman who this morning weighed in at 160 pounds and 2 ounces.  I'm the woman who yesterday weighed 162 pounds and 8 ounces.  While we're at it, I'm also the woman who can tell you what she weighed on any given day dating back to 2005.  I'm able to do that because I'm the woman who over the course of her never ending weight loss journey, developed a nasty compulsive obsessive disorder with my bathroom scale.

You'd probably pass this particular woman known as Me on the street and think she could stand to lose weight.  Trust me, you're not telling her anything she doesn't tell herself every time she looks in the mirror, or worse yet, at the chart hanging in the doctor's office that tells her she's about an inch short of a "healthy" weight and frequently fluctuates 3 lbs away from an "ideal" BMI.  Thankfully, this woman's doctor is in tune with her and realizes he needs to continue reminding her to stop trying to lose weight because she walks a very narrow line between calorie counting and flirting with an eating disorder, thus qualifying her as the world's biggest anorexic...or as I call it, Gigantor-exic.

So this woman makes a day to day, (or in some cases, minute to minute), choice to ignore the incessant opinions of society, their charts and yes, even the mirror, to focus on a few facts.  This woman has been happily married for almost 21 years and together are parents of 4 responsible, healthy and thriving kids ranging in age from 6-20, neither of which has anything to do with what the scale says.  And as for that pesky healthy weight obsession, this particular woman requires a conscious awareness to view food as the sustenance from God that it is, rather than her source of comfort, joy or even more commonly, the enemy, while doing her best to choose activities that she not only enjoys but that challenge her ever aging and rebellious body whose parts, despite her best efforts, appear to be heading South for the winter.

Unfortunately, this isn't about one physically fit mom who thinks she has all the answers.  She simply brought to light a bigger underlying issue.  This is about all women, myself included, who at any given moment choose the path of judgment, on and about each other, whether it be her choice of career, husband, mothering, politics, food, workout habits and/or physical appearance.  You name it, we judge it.  But, we need to caution ourselves not to jump to conclusions about someone based on the little to nothing we think we know about her, and when we catch ourselves in the act, need to remind ourselves of this:  You don't know her journey.  You have no clue what she deals with on a day to day basis.  You have no idea where she's been, where she's going, where God plans to take her and how He's going to use her.  Maybe we as women could begin encouraging each other and extending a little grace...that same encouragement and grace we crave when our own personal demons rear their ugly heads along our path.

So I have this to say to the mom who demanded my excuse.
This woman you might look at and label "overweight" is so much more than that.  This woman is on a journey with her Lord and Savior, Jesus Christ, the only one who knows her whole story because He's the author of it.  Everything about this woman starts there and that's where everything about this woman will finish.  Therefore, I have no excuse to offer you because I answer only to Him.  I'm sorry, but you're not qualified for the position of authority you placed yourself in by posting that remark aimed at other women, and in turn, joined the chorus of negative voices that already exist in our heads.  In your response to the public backlash, you explained that your reasoning behind the picture was purely motivational.  I'd be lying if I didn't admit that your photo elicited an envy deep within for a body that's forever been and ever will be unattainable for me or that when I learned that you're a professional personal trainer, I rolled my eyes and fell right into the judgmental train of thought that I just condemned a couple paragraphs above.  But 'Motivated' doesn't ring a bell.  Had you only left the photo uncaptioned, (I'd still be jealous), but maybe I'd be a little inspired.  Instead, you got personal and threw down a gauntlet causing women everywhere to ask ourselves why we don't look like you and putting us in a position to defend the unique and beautiful women God created us to be.


So come on, women!  (You too, hard-bodied mom we're all mad at right now.)
I have issues.  You have issues.  How bout we band together in a force of loving sisterhood so strong that our caption might read: 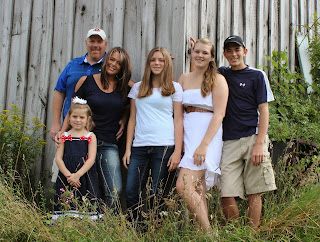 Posted by ~Sassy~ at 8:21 AM No comments: Links to this post