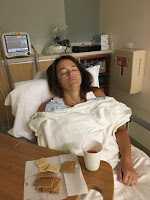 Tuesday, July 19th, p.m.
I awoke in recovery a few hours later, and by "awoke" I mean I vaguely recall being force fed sips of apple juice and bites of cracker from an assorted variety piled on my tray, by a nurse wearing what looked like a paper boat on top of her head, and whose bedside manner kinda sucked.

And seriously, let's take a moment to discuss that pile of crackers. Did I keep changing my mind on which type of cracker I wanted? Did they think I was starving? Or was Ron possibly swiping crackers off my tray behind the nurse's back, so she kept giving me more...hmmm. Come on, lady, I couldn't look more dead there. Stop with the snacks.

As far as the surgery itself went, it took a total of 3 hours and he opted for the 400 cc implants as opposed to the 350's. (And Ron rejoiced.) It all went so smoothly, that I didn't require any stiches, but rather he glued my incisions closed, and the predicted drainage tubes were unnecessary, too.

There goes the 'Boob Tube' post title. *sigh* I'm as disappointed as you are.

After being released, the next thing I remember was sitting in our van by myself in the middle of a country road, while Ron stood outside the front of our van, staring at me through the windshield...while he peed...which I would've chalked up to an hallucination, except later, he told me that really happened.
"5 cups of coffee in 3 hours is gonna come out somewhere."
Dude. Just, maybe next time, feel free to not be facing me when it does, k?"

The rest of the evening is a complete blank for me, but my family has informed me that during that time, they dubbed me '10-second-Tom' because I asked the same questions over and over again, repeatedly told anyone within earshot that my legs were wobbly and I itched all over, burst into tears when I had to take an Ibuprofen, because it wasn't time for another Percocet, demanded the girls pull my hair into a messy bun, but cried because it would hurt my head to lay in bed with a messy bun, and from there, things escalated to a scene in the kitchen when Ron made me soup without following the directions, and I had an emotional breakdown that'll forever be known in our family's history as 'The Mrs. Grass's Soup Incident of 2016', which I wouldn't believe, but I've seen the 6 minute video Kearstin was kind enough to record for proof as it all played out. I'm not proud of what's on that video, but in my defense, he made the damn soup wrong, capiche?

I really need to start remembering to tell doctors that narcotics screw with me.

Follow-up care wise, I'm on 10 days of antibiotics, I'm wearing a Velcro support bra resembling a bullet-proof vest, and for the first 48 hours, Ron was required to unwrap me every 6 hours to look at my boobs...supposedly doctor's orders, although this seems rather fishy to me.

From what I could tell, everything looked good. I was still marked up with purple lines, and there's an incision running straight down the underside of each breast as well as around my newly formed and perfectly proportionate areolas that now face front instead of down. Well, hello ladies. Nice to see you again.

I'm holding out hope that my chest size right now is attributed to swelling and they'll go down significantly as the weeks progress. Ron's holding out hope that they won't. Apparently, he doesn't mind the whole, 2-large-construction-cones-protruding-from-the-front-of-my-chest look. Time will tell who gets their wish.

I was scheduled to see Dr. O'Neil 2 days later for my first follow-up visit, where I offered this deal up to my husband: "You don't tell him about my soup tantrum and I won't tell him I had to watch you pee in the middle of the road on our ride home."

That guy's gonna think we're normal by the end of this, so help me.

Tomorrow you can read how it went...and why that whole think we're normal thing hasn't happened quite yet.