It was a Saturday night and Ron took the older kids to see a horror movie and then through some haunted caves.  They dubbed it 'Fright Night' and I wanted nothing to do with it.

I planned a fun quiet evening for Caymen and myself at home.  An evening that unexpectedly kicked off with a dog fight.  Not a playful oh-look-how-cute-they-are-wrestling dog fight.  No no.  This started over a rawhide chew stick and ended with Quincy attached to Summer's face, drool flying, me screaming and throwing things at them while Caymen cried until it finally broke up and they bolted into separate rooms.

I broke the awkward silence that followed.
"Ok!  Who wants to make cookies?"

A fast food dinner of her choice eventually consoled her.  "Can we take the dogs, mommy?"
You've gotta be kidding me.  But seeing as she'd just witnessed me pelting them with 2 tv remotes and a cell phone, I caved.

I loudly asked the question that brings our dogs running.  "Who wants to go bye bye?!"

Apparently I'd been forgiven because they all showed up in the foyer.  While I gathered my purse and keys Caymen yelled, "Where's Summer's eye?!"  What the... I looked down to see her wagging her tail and excitedly looking up at me with one normal eye and what appeared to be a bloody hole where the other one should have been.

Oh my dear Lord, as I teetered between vomiting and passing out.  Blissfully unaware, Summer anxiously waited with Tia and Quincy for me to open the door and I suggested that maybe Summer should stay home.  Caymen scolded, "You already said bye bye.  You'll hurt her feelings if you don't take her now."

I'd have so much more power here if she hadn't seen my involvement in that dog fight.  "FINE!!"  Then I sealed the deal by opening the garage door and saying, "Load up."

That's when I realized Ron had taken the van and there sat his giant pick-up truck, the back end loaded down and piled high with stuff intended for the dump with Caymen's old motorized police car balanced on the very top of the junk pile.

I looked down at Caymen with pleading eyes but she firmly said, "I guess we're taking the truck."  Dammit.

Tia and Quincy sat in the front with me while Summer jumped into the back with Caymen.  As we pulled out of the driveway I heard Caymen say, "Just don't look at me, Summer."
Can't blame her there.

We miraculously made it the 20 miles to the Wendy's drive-thru without the police car flying off the back, placed our order and pulled around to the window where all hell broke loose.  Quincy began barking and trying to climb through the window toward the attendant, which prompted Tia's low threatening growl that combined with her 90 lb German Shepherd body is enough to scare the pee down someone's leg, and then Caymen started screaming from the back seat, "She's looking at me!!!" over and over while Summer sat on her lap.

These are the moments when we count it a success if nobody calls the police on us.

When Ron got home we compared evenings.
Him:  "Ours wasn't that scary."
Me:  "Ours was terrifying."

Update:  Summer went to the vet.  Turns out her eye isn't gone, but it either rolled into the back of her head or something about dogs having a 3rd eyelid.  I don't know.  The important thing is, the eye is back.  It's bloodshot, doesn't blink and it's always looking off to the right, but hey, it's back.

In other dog news this week:  Tia awoke with explosive diarrhea in the middle of the night, I turned on the hose in our pitch dark yard to wash out her cage, a startled bird flew out from under the overhang, slapped me in the side of the face and I spent the next 48 hours cooking her giant servings of rice and force feeding her doses of Pepto Bismol.

But I digress.  That wasn't fright night.
Around here we call that Wednesday. 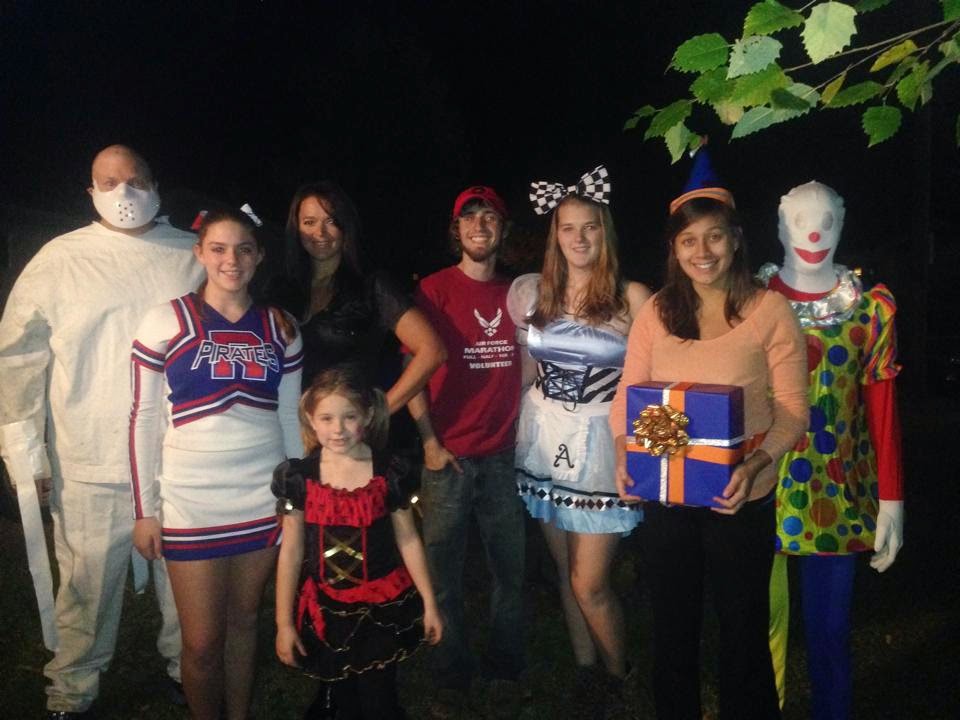 From our freak show to yours.

Posted by ~Sassy~ at 4:47 AM No comments: Links to this post

Prepare yourself for a little insight into our personalities because I feel like this title might become an ongoing sequel.  You've been warned.

Opposites attract.
So many areas we could discuss, but the one that seems to present itself the most is the difference in our social behavior.

If you know us well, you're probably aware of a few basic facts.
1.  Ron thrives on interaction with lots of people.
2.  I do not.
3.  Ron cares very highly about what people think.
4.  I do not.

My husband lives in a complicated world of pretty colors.  Someone might walk away from a lengthy conversation with him feeling like his best friend, having no idea that as soon as they're out of earshot he turns to me and says, "Who was that?"  When he's asked to do something he doesn't want to do, his response is, 'Sure!' and then develops a detailed excuse to get out of it later.  He's the life of any party and no one gets offended in his presence.  He loves the social scene and the social scene loves him.
The upside for people is, Ron knows them and likes them soooo much.  The downside is...what downside?  The dude rocks.

I, on the other hand, live in a simple world of black and white.  I either remember who you are or I don't, in which case I'll say, "Please remind me how I know you"  or "What's your name, again?"  I either want to do something or I don't and I'll answer yes please or no thank you with sometimes little or no explanation.  Social interaction on a larger scale is fine in occasional doses, but my happy place is always small, real and intimate, with people who know me well.  My goal is not to offend, but anything less than sincere is taxing for me.
The downside is, some people might think I'm anti-social...or a jerk.  The upside is, I'll always be honest with you.  So if you don't want to know something, please, for your sake, don't ask me.

But believe it or not, our differences in our dealings with others isn't always a social disaster.

Within our family, it's a non-issue because our kids know no different and the entire dynamic leads to lots of laughs.

Professionally it works, too.  He the loveable Engineer who spends his day surrounded by people and conversation; me the Massage Therapist who's content to spend endless hours a day in a dark room listening to soothing music with someone who most likely doesn't want to hear the sound of my voice while they're trying to relax.
It's a win/win.

And we both play killer Bad Cop.  After 21 years of marriage, we're pretty good at falling into the role...a DirectTv service rep who may or may not have a restraining order against my husband can attest, as can Mark from Orkin who might never agree to come to our home again, but if he does I bet he doesn't open with "Mam, your treatment from 2 weeks ago is still working."  Hey, Mark from Orkin.  Let me tell you a little story.  Once upon a yesterday, there was a flea on my arm.  The end.  He was pulling his gas mask over his face when I backed out of the driveway.
How miserable would life be without Bad Cops?

I've mentioned before that strangers love to tell Ron their life story.  My reaction is to look at them with my best 'please stop talking' face but not before Ron has asked them a follow-up question encouraging more conversation.  Cashiers are the worst.  So I lean against the cart until the conversation ends...and sometimes I'm treated with a great ending.  One cashier told Ron that she lost her grandmother the previous day.  That conversation ended when Ron said, "I hope you find her."  Two weeks ago, an elderly cashier in Hilton Head told Ron all about her recent move to the island, complete with the exact housing development she's living in.  I really wish I'd been looking at her face when Ron closed with, "Hope you have a safe day."  Pretty sure she's still sleeping with one eye open.  And I'll never forget the time he was home when a massage client arrived and he said to the guy, "Enjoy my wife."  Not okay, Ron.  Not. Okay.

But his lapses happen when he's not on his A game.  Mine happen when I'm actually trying.  On our drive down to Hilton Head, I awoke to find us parked at a gas station at 4am.  Ron was inside using the bathroom, so I decided to go in and get some coffee.  While I was checking out, the employee asked me where I was headed, then asked where Hilton Head is and where I was from.  Considering the early hour and my aversion to small talk, I thought I was handling this guy's attempt at conversation really well, until he asked how much further I have to go and I said, "That depends. Where am I right now?"  I'm betting he kept the video footage of me leaving with the big man who exited the bathroom at that moment in case my picture appeared on the news that night.
See, no good comes from talking to strangers, kids.

God brought us together because it works...or maybe God makes it work because we somehow got together.

Either way, somebody might owe the world an apology.

Posted by ~Sassy~ at 6:53 PM No comments: Links to this post