Every blog entry starts with a title.  With Aubrey's senior prom, Mother's Day, Kearstin's 15th birthday, Aubrey's high school graduation, and the preparation for a reception we hosted for Zac and Barbara this past weekend, let me assure you, the fact that it's been a month since my last entry speaks more of my lack of time than lack of titles.  So allow me to compile a couple of May's entries into sub-titles, that coincidentally happened simultaneously. 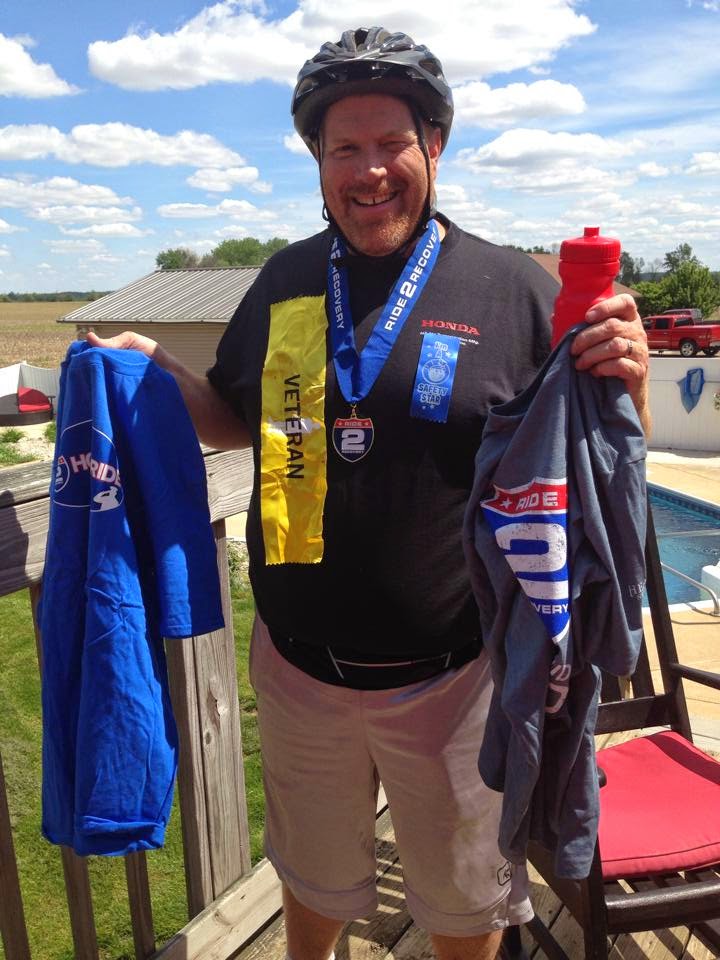 Ron signed up to participate in the first annual Honor Ride, a 35 mile bike race in Columbus.  It was a spur of the moment decision that led to the purchase of new racing bike (read:  tiny seat that inserts deeply into butt hole by mile 3), the borrowing of a bike helmet and exactly 2 bike rides around our block to "train."  He tried desperately to get me to do it with him, but I adamantly refused.  (Those are the fork in the road moments where you look back and see God's protective hand in the preservation of a marriage.)

Ron predicted he'd have it completed in roughly 2 hours.  But in full-on Courter fashion, several things went disastrously wrong.  It started with a volunteer at a pit stop pointing him in the wrong direction, escalated with pranksters switching some of the route signs around, proceeded downhill when he got lost, stumbled into an area that had no phone signal and had to flag down an elderly couple in their car to ask directions only to discover that he was inadvertently halfway through the 70 mile bike race course.  This would've been the point where my seething rage turned into a puddle of tears and urine on the ground alongside the road until either God or Care Flight delivered me home.

But Ron persevered and rode all the way back to the pit stop, where my first order of business would've been to kick some volunteer ass, but Ron opted instead to hitch a ride.  Nine hours, 55 pedaled miles and 15 miles riding in a u-haul later, my husband completed his Honor Ride, with honor and testimony intact, and was rewarded with every free t-shirt, ribbon and medal they had on hand. He arrived home, climbed directly into the hot tub and said, "So what did you do today?"

Funny you should ask...

Dress Up
*No picture to accompany this story.  You're welcome.*

You'd think with as much trouble as Ron and I get into together, we might do better apart.  Turns out, that can actually be worse.  While my husband pedaled for his very survival through the streets of Newark, I decided to try on a dress Lissa gave me.  (Note, once again, the involvement of Lissa.)  Caymen and Kearstin were both asleep and this should've been a non-event.  Try on a dress.  Like it, keep it.  Don't like it, pass it on.  I unzipped it to the seam that ran across the middle of the back.  Stepping into the dress wouldn't work so it had to go over my head.  Not a Claustrophobiac's ideal scenario, but I'm a 2-time Tough Mudder and I will not be intimidated by a dress.  Cue Mandisa's Overcomer as I bunched the dress up as tight as I could, quickly rammed my head and arms through the hole, fought off tears when it got stuck above my chest and danced around hyperventilating while I frantically pulled it over my bare boobs, because heaven forbid I be prepared for an emergency.

I successfully squeezed everything into their proper compartments, checked out the end result in the bathroom mirror, and decided the dress was a keeper.  Then I realized I had to do everything in reverse to get the thing back off.  I pulled the dress up and struggled until my boobs finally plopped out of the bottom.  That left me with the dress bunched up underneath my armpits and my arms hanging over the top cocked at weird angles.  The goal was to cross my arms in front of my face, grab the bottoms of the dress and in one rapid movement, whip it off over my head.  I counted to 3, yanked it up and got stuck.  Really really stuck.  Like, arms straight over my head, dress tightly wrapped around my shoulders, face and arms stuck.

The panic that had been rising to the surface finally bubbled over the top and unable to see anything except the inside of the dress, I literally bounced off walls as I ran through the house until I found my way into Kearstin's room and screamed for help until she woke up to the sight of her headless, naked mom, frantically flailing her hands straight up in the air through the top of a dress.
A therapist is in her very near future.

I couldn't see her, but by the disgusted sound effects, I could tell she didn't want to become involved in whatever twisted nightmare I had going on here, but she had no choice.  She didn't ask me what happened.  That was pretty obvious.  Her only question was, "Why are you wet?!?"  That would be profuse sweating, can we please save the interrogation for another time.

Our first attempt was for me to get on my knees and she yank it off the top.  Fail.  Second attempt was for me to lay on the floor and yank it off the top.  Fail.  Third and final attempt before resorting to calling 911 and then changing our identities in the Witness Protection Program, was for her to slowly push the dress inch by inch, shoulder by shoulder, until it finally released over my head.  A brutal 5 minutes later, I finally broke free and she made me promise never to climb into that dress again.
Um, obviously.  I'm not an idiot, ya know.

She went back to bed and I untangled the dress to return to Lissa when I noticed a detail on the zipper that I'd missed before.  As it turns out, it actually unzips past that seam all the way down to my butt.  Deal changer.  I stepped into the dress, pulled it over my chest and slipped my arms in...then I walked into Kearstin's room and asked her to please zip me up.

She opened her eyes, looked at the dress and said, "Get out."