Deck The Brawls. Part I.

Christmas season has been pretty exciting around here. I'm not talking parties and Christmas parades exciting, although we've had a lot of that too. See, when I say exciting, I mean Christmas lights, public fights, and fender benders in our driveway, exciting.
It's the Courter way.

Here's what you need to know. Ron refuses to hang Christmas lights.
He's scared of heights, the lights blow off, the ones that don't blow off need taken back down after Christmas, you get the picture. But I love Christmas lights. ALL white lights. Nothing against the multi-colored lights, but those are obviously Christmas lights. But white lights can pass as 'New Year lights', and as far as I'm concerned, you can squeak by with 'Valentine's lights.'
(That's where I draw the line. 'St Patrick's lights' is stupid. Take 'em down, already.)

Anyhoo, his answer to me is always forget it.
A long time ago in our old house, I tried hanging lights by myself, ended up trapped on our super tall 2-story roof afraid to climb back onto the extension ladder, and begging him to call the fire department. He refused. A fight broke out. Our marriage survived. Barely.

But this year, everything changed with one word. Grandchildren. They hold all the power, in case you didn't know. And on Thanksgiving Day, our neighbor's house lit up with Christmas lights and their little toddler eyes lit up right along with them. 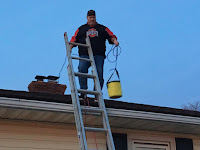 Chuckles, who refuses to be outdone by anyone, came home with bags of Christmas lights the following day. (White ones, obvi.) Then he went to work. He put up his ladder, filled a cooler with the lights, attached it to a long rope, climbed onto the roof of our garage, and pulled his cooler of supplies up to join him. He's slightly redneck, albeit a brilliant one.

Awhile later, I heard him yelling my name from the roof. I figured he needed his cooler refilled, but no. (And here's where the story takes an unfortunate turn.) He remembered that our chimney grate had blown off a few weeks ago and asked me to hand it up to him. No big deal. What became a big deal was when he asked for a wrench. And a certain sized one at that.

*sigh* So he's decided to punish me and test our marriage all in one moment. Merry Christmas. 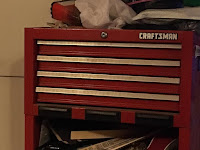 He gave me detailed instructions: In the big toolbox by the garage door, in the 2nd drawer down, I'd see a set of wrenches neatly fanned out. Then it was simply a matter of choosing the one that fit around the screw he'd tossed down to me from the roof. The screw that I caught. On the first try. Not that I got any credit for that, but let's not digress here.

I went to the toolbox by the door, opened the 2nd drawer down, and found total chaos. Neatly fanned? What the hell's he smokin'? I dug 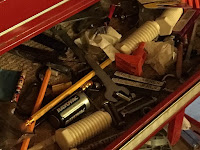 through, found a few little wrenches, none of which fit around the screw (that I caught on the first try), so I reported back to him. Can't find it.

He then enunciated every word...toolbox. by. the. door. 2nd. drawer. neatly. fanned...he might've still been talking when I walked away. I retraced my steps, followed his instructions (again), and voila. Still a drawer full of crap. So I checked every drawer because maybe he was confused, but all of them were in a state of upheaval.

I went back outside, told him he'd need to come down and find it himself, and that's when the 'Christmas Lights Fight Of 2017' officially broke out. Not to be confused with the 'Christmas Lights Fight Of 2003.' Equal amounts of screaming and yelling, but this time, I was on the ground, and he was on the roof. And just between you and me, I wouldn't have called the fire department if his life depended on it.

Be jealous you're not our neighbors.

Between gritted teeth, I calmly said, "Get your ass off that roof, come show me your organized wrench drawer, and I'll say I'm sorry right here right now." Then I crossed my arms and waited while he slowly made his way down the ladder, both of us gloating, because he was sure he was about to get an apology from me and I knew we were approaching a major milestone in our marriage and I was about to never ever ever apologize to him about anything ever again. Ever. 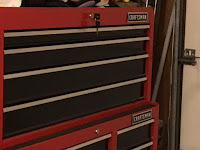 Then he walked to the tall toolbox by the door. A different toolbox. A taller toolbox. By a different door.

Then he opened the 2nd drawer down. Of the different taller toolbox, by the different door. And he turned to me and said, "Come here." 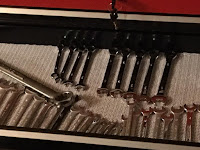 But he insisted that I come over and look in his drawer of wrenches that could only be described as neatly fanned, and then I had to tell him I'm sorry because sometimes he's a jerk and marriage isn't fair.

But our house is trimmed in beautiful white lights, complete with frighteningly bright and distracting rapidly blinking lights around the trees at the end of our driveway that most certainly draw the eyes of our grandchildren, if  not run the risk of receiving a cease and desist letter from the mayor when accidents happen and the Amish start to complain. It's only a matter of time.

And speaking of accidents, you may remember me mentioning a fender bender.
Well, unfortunately this entry is already a bit long and I've starred as the family moron enough for one day, so I think this calls for a Part II.

Tune in soon for tales of collisions, spray paint, Jesus, and more fighting. Because, you know. Christmas.
Posted by ~Sassy~ at 9:52 AM