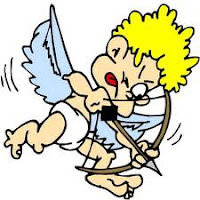 Let's remind ourselves what we know about me:
1.  I'm insecure.
2.  I may or may not be going through a midlife crisis.
3.  I'm frantically fighting the natural aging process while still desperately attempting to be attractive to my husband.


All of that leads up to this year's Valentine's Day.

(((WARNING)))  This entry is not for the faint of heart.  (Read:  easily offended.)  If this is you, turn back now, no hard feelings.  If you disregard this warning, pray for me if you must, but try to fight the urge to send me hate mail.

It all started last month with a challenge from one of the girls in my Bible study:  "Go home and ask your husband what he finds physically attractive about you."  For the insecure, that is not as easy as it sounds and it took me over 2 weeks to finally do it for fear he'd either laugh at me or worse, not be able to think of anything and resort to the go-to..."Um, your eyes?"  So, late at night, on February 13th, in the pitch black of our bedroom, I mustered up the nerve and in a shaky voice I pathetically said, "It's okay if you can't think of an answer..." and then asked the big question while I squeezed my eyes shut and waited.  They popped open when he didn't miss a beat and started listing things off.  He started with my hair and a couple minutes later ended with my tan and had lots of specific details in between.  What?!?  He doesn't see what I see when I look in the mirror?!  Score!

With my heart still soaring from his answer, I awoke on Valentine's morning to find a gigantic balloon, candy and a card with a very personal and meaningful message written inside.  With an idea from that same bible study friend, I began planning a 'Family Date Night' dinner complete with fancy dishes, wine flutes, heart shaped cookies and pizzas from our favorite place.

After dinner we played a game I made up.   My husband held a big pink paper heart and we went around the table and each said what we love about him.  Then he popped the dice on the old 'Trouble' game board and we passed the heart around the table that many spaces.  The heart was handed to 5 year old C, who assumed the person holding the heart possessed the power to approve or disapprove each person's answer and sometimes demanded more specifics of things we adore about her and would even offer up suggestions.  Well that's loveable.  She popped the dice.  Back to my husband the heart went amidst a few grumbling "Again?"  No offense, I'm sure, and he enjoyed his 2nd turn.  He popped the dice.  Back to C.  This time, there were loud groans and some refusals to participate with one threatening to quit.  To be honest, I didn't think I could survive another C turn, either.  So we pitched the dice and simply passed the heart so that everyone got a turn.  By the time the grease-stained crumpled heart got to me, everyone had lost interest in my awesomely loving game and I received some pretty lame reasons they love me until we got around to my husband who hadn't been paying attention and sat looking at me.  I said, "Well, what do you love about me?"....and he started with my hair and before I realized why this sounded so familiar, he was reciting his detailed list about my body from the night before while our kids mouths gaped open and by the time he got to my tan they looked visibly ill.  Z broke the awkward silence when he looked at me accusingly and said, "How did you possibly think this would go well?"  Good point.

But my date night with my hubby 2 days later would go uneventfully, right?  Right.  Until, just for fun, I handed him the remote to a pair of vibrating underwear (don't judge me, you know you either have a pair or want a pair) and I nearly ended up on my knees in the parking lot of Fridays Restaurant when he thought he was unlocking our van doors.

His remote was immediately confiscated.
Clearly he can't be trusted with that kind of power.

In Sickness And In Health 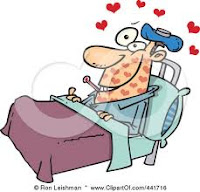 Having celebrated our 20th Anniversary last month and the impending Hallmark Holiday called Valentines Day, our marriage has been on the forefront of my mind lately.  Let's face it, to make it 20 years in this day and age, we obviously didn't take our vows lightly, especially the phrase "In sickness and in health."
Be careful what you promise, people.

As you can imagine, over the span of 20 years, we've seen it all.  Between having 4 kids, one of which was 8 weeks premature, and the day to day illnesses and unforeseen emergencies, our family has experienced it's fair share of putting that vow to the test.  Then consider the fact that I'm married to a hypochondriac and we've got ourselves a full-blown psych ward on our hands.

Speaking of psych ward, it wouldn't be fair to focus solely on my husband in this post.  In the interest of full disclosure, I'll confess that when I had my tonsils removed when I was 33, he deserves nothing short of a commendation for not filing for divorce.  Having already experienced 2 c-sections and a natural childbirth at that point in my life, I thought it would be a piece of cake.  But instead, I resorted to punching myself in the leg as hard as I could every time I had to swallow my liquid Codeine just to take the focus off the pain in my mouth.  And while we're on the topic of that liquid codeine, let's discuss what that did to my mind.  It was 2005 and they'd just caught the infamous BTK Killer.  (Bear with me and make special note of the word caught.  They caught him.)  So it made absolutely no sense that I spent 4 days patrolling our house all night every night, protecting my family from him.
Turns out, Codeine screws with me.  Now we know.

But let's get back to my lovable hypochondriac.  My sweet man who not only loves to self-diagnose, but takes it upon himself to diagnose others.  It's a real treat.  My first clue came 15 years ago when after watching a segment on 60 minutes, he turned to me and said, "I think my arteries are hardening."

That was the official kick-off to what led to years of Dr. Hubby's official diagnosis of self and others including but not limited to; his Maltese Spider bite, my degenerative bone disease and his prognosis of double hip replacements, K's low blood cell count and his order for me to increase her red meat intake, C's Myrsa, (aka; dry skin on her hands), a Hepatitis scare, my PTSD which he thought stood for 'Post Traumatic Sex Disorder', and pain in my back which was most certainly an undiagnosed dislocated rib that would eventually puncture my lung.  I spent 2 weeks being careful not to cough around him, heaven forbid wheeze.

I know I'm not alone.  In my research on this blog topic, I encountered many doc-wanna-be hubbies.  It's what they do.  But it doesn't mean I have a high tolerance for it.

So when I started my next Beth Moore study several weeks ago and the topic was "Compassion and Mercy" I thought, oh crap.  And lo and behold, I felt God pressing me to not only show compassion toward others, but to be intentional about it and actually watch for people who might have a need.  Something as simple as a smile, a word of encouragement, the parking space I'm crashing through carts to get to first....you get the idea... I thought I was doing well until a minor setback in Aldi's when Z and I were standing in line behind a woman who had an overflowing cart while I held a single ham in my hand.  When a cashier opened a new lane and said, "I'll help who's next" it only made sense for me to dart over there.  Didn't realize that God was going to use my teenage son to chastise me with a lecture about putting others first and then lecture me again when I rolled my eyes.
"and a child will lead them"...blah blah blah...

All of that brings us to Wednesday when I found myself sitting in a hospital waiting room being tested again.  My husband was having a biopsy done.  I was careful not to roll my eyes when he started using phrases like, "bleeding out" and "tearing away of flesh" all the while listening to the grating sound of Kelly Ripa's voice on the tv in the background.  When they finally called him back and I was alone in the waiting room, I prematurely congratulated myself on passing The Big Mercy Test, when in walked our county's version of Honey Boo Boo and her family.

If you're unfamiliar, just imagine a child who's loud, rude, crass, you name it.  Everything that would require major Mercy and she set her sights on me and decided that we should be friends.
Oh, dear Lord, I thought you would never give me more than I could handle.

For the next 20 minutes I found myself on the receiving end of all of Boo Boo's colored papers and uninvited attention until the nurse finally rescued me and reunited me with my husband who immediately pulled aside his gown and frantically asked "What does it look like?!?"

"Well, I'm no professional, but to the best of my knowledge it looks like a band-aide...a small one..."

Ok, so I'm still not great at the Compassion and Mercy thing.  Cut me some slack.  I'm only on Chapter 5.