You can't make this stuff up, people.

DISCLAIMER: The Amish driver and his horse both survived. (If that doesn't get your attention, nothing will.)

Regular readers of my blog and Facebook are well aware that I have a bit of a, shall we say, tumultuous relationship with our Amish neighbors. Maybe tumultuous isn't the right word. Bizarre would probably be more accurate.

Most of my encounters with the Amish involve their ill-timed trips past our house to find me cursing our weedwacker while wearing various outfits, all of which would be considered inappropriate by Amish standard.

Lately, on more than one occasion, I've come face to face with a particular horse and driver in an odd game of "Chicken" as I'm jogging along the road and he's in my path heading my way. Either he recognizes me and I scare him or he's extremely polite, because each time, he kindly takes a wide path around me. We say hello to each other as I pray he doesn't recognize me without my weedwacker....or in my husband's boxer shorts.

Fast forward to this morning. In a rare occurrence, I was fully clothed and standing at my front door waiting for my Massage Client. Along came my new Amish friend and I was inwardly congratulating myself for not causing him alarm or inconvenience as he passed by our house.

But then out of the blue, a car sped past our house and the Amish wagon literally disintegrated before my eyes and the driver flew into the air and barely missed landing on the car that hit him. That was followed by a semi coming up behind, slamming on his brakes and screeching to a stop behind what used to be the Amish wagon, and a car behind the semi slammed to a stop having no idea what just happened in front of her.

I burst into tears and ran outside scared to death of what I was going to see when I rounded the semi. But before I made it, the Amish horse came tearing around the back of the semi dragging a wheel and other pieces of it's wagon behind him and he was being chased by the Amish driver. Thankful that he was ok, I yelled for the girl in the car to call 911 and joined the Amish man in pursuit of his horse around our front yard.

So when my client pulled into the driveway, that's exactly what she was witnessing. Welcome to our home. We call this "Wednesday" around here.

He caught his horse and tied him to the tree in our front yard and we struck up a conversation. I said, "Are you ok?" And he said, "Are you the woman who runs?" (I was so thankful that my weedwacker wasn't mentioned. I think we just bonded.)

He said he was fine but predicted he'd be sore in the morning. I refrained from offering up my services as a Licensed Massage Therapist, fearing I might do some damage to our blossoming friendship if I invited him to come to my house and let me rub his back free of charge. He was freaked out enough already.

With a horse tied to my tree, pieces of buggy scattered everywhere and the sound of sirens heading our way, I excused myself to greet my client and explained to my new friend that I'd be inside if anyone needed to talk to me. I walked inside amazed at how miraculous it is that he and his horse are both fine and I'm so thankful.

Just before I began her massage, I texted Z about what just happened, then turned off my phone.

Little did I know, that at that exact time, Z was at school in a Texting & Driving Simulator to teach the kids firsthand how little it takes to get distracted. He was instructed to text while he drove.

So when my text came through, he went ahead and read it.....and then he jerked the simulator wheel, hit a simulated guy on a bike and skidded into a simulated telephone pole and yelled "Holy Crap!!"

Lesson learned. Don't text and drive. Glad I could help.
Posted by ~Sassy~ at 7:46 AM No comments: Links to this post

I cheer, therefore I am. 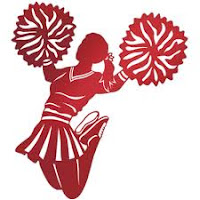 Is 39 too young for a midlife crisis? Well, technically, I'm on the slippery slope to 40 and sliding faster every day.

The midlife crisis thought first crossed my mind last month, when I willingly paid extra money at an amusement park for the opportunity to allow 2 strangers to strap my husband and me into a giant ball attached to bungee chords and then proceeded to allow them to fling us 300 ft into the air together.

That spontaneous lack of judgement prompted us to update our Will.

Then last week, I received an email informing me that my High School was in search of alumni cheerleaders who were interested in dancing at the Homecoming Game this past Friday. I bolted to my closet. The desk chair was still swiveling when I returned with my old uniform. I was thrilled when the skirt zipped up the back and the sweater fit too. Not exactly as it used to fit, mind you. Once you factor in that I've birthed 4 children and my boobs used to sit about a foot higher than they do now, you understand the odd way the sweater hangs these days. What once was up, will come down. It's a fact of life.

When Zac came home from school, he found me cleaning the house in my Cheerleading uniform. He stopped. Stared. Said, "Oh gosh." And walked away without asking.

Only my daughters seemed completely enthralled with my sudden obsession with high kicks and even higher pony tails. They followed me around the house asking lots of questions and comparing jumps. Then we sat around and talked about boys and used the words "Like" "Totally" and "Awesome." And then I taught them to combine them...."Like totally awesome." (My girls and I are pretty tight.)

Zac kept quiet on the topic of my Cheerleading AND he refused to spot me on a round-off-back-handspring, doubting my ability to do it without paralyzing myself. Dude, It's probably like riding a bike. What could go wrong?

Ron, on the other hand, spent last week with the look on his face seen on kids in a candy store. Enough said.

Thursday night I had Cheerleading practice. (I can't even type that without twirling my hair and craving a piece of bubble gum to pop and smack.) There were about 10 "real" cheerleaders and 5 of those suffering from sudden identity crisis. I was one of the 10.

We reviewed 2 routines. The first was The Fight Song. No problem. Our High School fight song is the same tune as Ohio States. Therefore, I've spent every Saturday for the past 21 years dancing that routine every time the Buckeyes score. My husband can attest to that.

The second routine was to a song called Chief Mac. I remembered bits and pieces. (More bits than pieces.) But I was too embarrassed to speak up and figured YouTube would come to my rescue. No such luck.

I spent all day Friday imagining the horror that was about to happen that night in front of hundreds of people. I was gonna go out on that field and totally rock The Fight Song, only to turn around and look like a stroke victim during Chief Mac as I lay on the field in the fetal position crying in a puddle of my own drool. (You've entered The Drama Zone.)

To top it off, on the way to the game my husband broke some big news to me. "It's The Game of the Week! Channel 2 News is gonna be there!" That was followed by him stopping me from diving out of the side of our moving vehicle while the kids screamed.

But we got there early and I spent some quality one on one Chief Mac tutoring time with a cheerleader....whose eyes were coated in the most beautiful gold glitter eye shadow I've ever seen and I spent half the time wishing I'd known that existed. But I digress.

We took the field, in the cold pelting rain, and I was at home. The band started playing, I closed my eyes and I danced. And I couldn't stop grinning.

And in case you all are wondering if I was wearing my uniform, the answer is no. Despite the fact that I kept it in pristine condition and that it still fit, once the tiny detail that I no longer own the tights that cover my underwear emerged, that became a deal breaker. Picky picky.

I'm currently on the hunt for a black warm-up suit with gold lettering. Because next year, I'm gonna match the Cheerleaders. Complete with a thick coat of glittery gold eye shadow.

In the meantime, I'll move on to my next midlife crisis activity.
I signed my husband and I up to run a 5k on Thanksgiving Day.

Would anyone like to break that news to him for me?
Posted by ~Sassy~ at 4:37 AM No comments: Links to this post