The End Of Our Rope 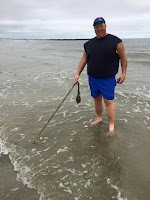 Hilton Head, South Carolina is kind of our place. We've been vacationing there for roughly 19 years, and 4 years ago, we finally took the plunge and invested in a few Time Shares, and we now go there twice a year. In May we go as an entire family for 1 week. And in September, Ron and I go alone for 2 weeks.

It's a relatively upscale island with a lot of focus on golf and tennis. Just so we're clear, we don't play golf or tennis and "upscale" is not a word that would accurately describe our family. (Or at least I hope not.) So inevitably, whenever we mention our trips to Hilton Head, the first question people ask is, "What do you guys do there?" The simple answer to that would be, nothing. We do nothing.

We lay on the beach. And then we lay by the pool. On our trips with the kids, we rent bikes and go on long rides in single file resembling the Von Trapp's in The Sound Of Music, except we're not wearing curtains...or singing. And when we're not laying by a body of water somewhere, or Von Trapping it along the bike paths, we can be found having our own kind of not upscale fun, like feeding cheeseballs to the turtles via water balloon launcher from our 4th story balcony, and there used to be times when Zac would dress up like a clown and juggle for the kids at the resort. But that was back before clowns became Satan. Now we live in a world where dressing up and running around like a clown willy nilly will get you shot.
And it should.

When Ron and I go alone, there's slightly less tom foolery. Slightly. Launching and shooting snacks from our balcony isn't nearly as fun without kids, and bike riding takes on more of a racing situation with 2 people side-by-side as opposed to 10 of us in a single file, and Ron and I racing on serene upscale bike trails beside serene upscale golf courses is ugly, golfers get pissssed, and people hate us everywhere. So we lay. On the beach and by the pool and occasionally I surprise him and pull out a tennis ball and we'll throw it back and forth to each other in the ocean until he nails me really hard with it and then I go back to my beach chair where I wanted to be in the first place, because fighting in Hilton Head is a no-no.
It's like our only rule. 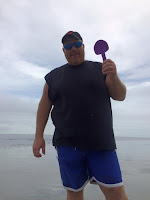 I think you get the general idea. Besides my beach run and trip to the gym every morning, we're basically the island sloths.

But last September, 2015, something very exciting and out of the ordinary happened that changed our trip forever. We found a rope. We were taking a walk about a mile down the beach from our condo at low tide, I saw it floating, waded into the water, and grabbed it. Yeah, it was a pretty big deal. 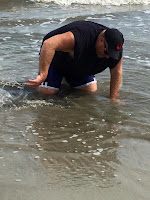 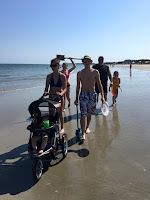 So, 7 months later, when we returned with our family, we tracked the low tide, followed the ping, and came armed with kids and tools. Power in numbers, yo. And we dug and we pulled and we dug and no luck. Nothin. 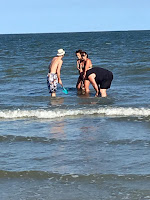 If you're wondering why we weren't willing to give up on this seemingly useless endeavor, maybe we shouldn't be friends. I mean, obviously, there's something on the other end of that rope. Ron's convinced it's a treasure chest from a pirate ship, but he also believes in Big Foot, so there's that. But I know what it is. It's an anchor. And anchors are my super cool thing right now, which makes that way better than a pretend treasure chest.

Soooo, we returned again last month to continue our quest. This time, there was talk of investing in a double gear cable puller called a Come-Along, or making sandbags and building a dam of sorts...at least until a lifeguard or someone from the "town council" stopped us. *eye roll*
They hate us there.

But when we followed our ping to where our rope should've been, we searched for over an hour with no luck. We looked for 3 days and finally concluded that someone obviously stole my freakin' anchor. (Ron: "Or treasure chest.") Stop it. 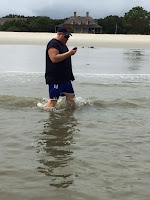 Having nothing to do now, we booked a shark fishing trip, where the captain asked us, "So, have they rejuvenated the beach where you stay yet?" Um, what'chya talkin' about, Captain Joe?
"Yeah, they're redoing all the beaches with fresh layers of sand."

WELL. That explains a lot. Like, why my knees hurt when I run on the "fluffier than usual" sand. And why we can't see the tips of little rocks near our resort anymore. Or why we can't find our damn rope!

I told you town council hated us.

But we'll check again in May when we return, because on the bright side, Hurricane Matthew hit the island last week and might've washed away their stupid new layers of sand.

Okay, maybe we shouldn't call that "the bright side." But in my defense, they sabotaged my rope. So if ever there was a place for sarcasm, disapproval, sass, and side-eye, I'd say it's here. 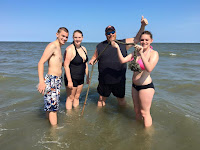 Posted by ~Sassy~ at 8:56 AM No comments: Links to this post