Courter of a Century 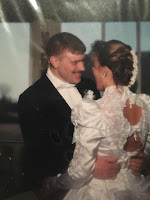 Last year, I posted about our wedding.
This year, I thought it'd be appropriate to post about our marriage.

There's a big difference, ya know.

If you read my post from last year, you know my regrets about our wedding. Even 25 years later, we still wish we'd eloped by ourselves.

But that same 25 years of marriage later, I can honestly say, I'd do it all over again. I'd do some things differently, but every moment of every day of every one of those 25 years has brought our family to where we are today, and I wouldn't change anything about that.

You know that show 'Say yes to the dress?' Well that's a bunch of crap.
Believe it or not, that dress is gonna get boxed away, forgotten, faded, outgrown, and one day you're gonna pull it out to show your kids and they're gonna laugh at the 1990's puffy Dynasty sleeves on that dress you dreamed of your daughters wanting to wear someday and then you're gonna realize you have way too much back fat for it to zip properly, you'll emotionally spiral, end up having a pity party with your best friend who's 12 years younger than you, and she'll be standing in your living room wearing her way cooler sleeveless dress eating sympathy pizza together...er, so I've heard...totally hypothetical here...ignore the picture.

So, not to steal your thunder or anything, but when you accept that ring he gives you, you ain't sayin' yes to a dress. Sister, you're sayin' yes to the mess.

I said yes to a loud eater and drinker.
He said yes to me loudly yelling knock it off during every meal.

We both said yes to occasionally eating a cake by ourselves for dinner. In our bed.
(No regrets.)

He said yes to someone he accuses of "always assuming the worst" because I refuse to answer phone calls.
I said yes to someone who stashes loaded guns around the house, arms himself, and then sits in the rec room until the guys he hired to paint gets it done.

We both said yes to our kids sleeping in our bed with us for an average of 10 years each.
(Okay, we might have a few slight regrets.)

I said yes to an extrovert unable to stop himself from making eye contact with the timeshare salesman standing outside the Walmart in Hilton Head.
He said yes to an introvert with social anxiety who keeps walking with her head down until she gets to the van before realizing her husband is still back there talking to the timeshare guy.

We both said yes to allowing him to decide the length and color of my hair at any given time.
(Not that I had much say in that matter.)

We both said yes to me being the one to answer any and all calls from telemarketers. Which means we don't. Ever.

We both said yes to occasionally switching up roles just to screw with people.

He said yes to a woman who will tell people the blunt, honest, truth if they ask her a question...and sometimes even when they don't.
I said yes to a man who's motto is 'If I can't dazzle them with data, I'll baffle them with bullsh*t."

We both said yes to frequent apologies to each other and to our children.

I said yes to a  man who loves to take me away on getaways.
He said yes to a woman who finagled the Orkin inspector into giving her his private cell number so I could periodically text him pictures of suspicious looking bugs I find in hotel rooms.

We both said yes to lavishing our kids and grandkids with absolute UN-conditional love, no strings attached. Forever. Always. Period.

We both said yes to saying I love you every single day.

We both said yes to refusing to ever allow our feelings to dictate the success or failure of our marriage.

I said yes to a man who fills up on pop at a restaurant and needs a take home container for his food.
He said yes to a woman who can easily polish off a pound of beef on a bun with one sip of water.

We both said yes to never sharing our meal. Seriously. Reach for a fry, lose a finger. Try me.

I said yes to a man who would get me anything I asked for.
He said yes to a woman who never asks for anything...except sex...and the occasional cosmetic surgery.

We both say yes to the sex...and the occasional cosmetic surgery.

We both said yes to making that choice. It's not a choice we made once. It's a choice we each have to make every single day. And trust me, it's not always an easy choice for either of us.

But when we said yes at that "wedding" 25 years ago, we weren't just saying yes to each other. Twenty-five years later, we have 4 children. Two of them are married. Two more that probably will be in the future. We have 4 grandchildren at this point and hopefully many more to come. So that yes isn't just about us and quite frankly, it never was.

That yes was to honor a commitment and covenant...to God, to each other, and to every generation that follows after us. It's not easy. And it's not clean. He's still a mess. And I'll always be a hot mess.


But daaamn...together?...What a perfectly beautiful mess...