Special Guys, Slip 'n' Slides, and Cluster Flies...That's What Father's Days Are Made Of.

Father's Day weekend. Three exciting days of plans and, of course, the unplanned.

Friday's plan: Golfing.
What we didn't plan, was Ron spending a lot of time searching for his balls in the surrounding cornfields, us shooting a whopping 54 on 9 measly holes, tying with our son and daughter-in-law, and the 4 of us sneaking back around to break the tie on what we deemed the "hardest hole"...the one where geese were sitting all over the green. Like, real geese. This ain't putt putt, people. We got beat by 1 stroke. That certainly wasn't in the plan.

Saturday's plan: A trip to the 2nd annual Slide The City.

What we didn't plan, was for everything involved with that to go smoothly. Seriously, for an event that draws thousands of people wearing bathing suits and slip 'n' sliding down the street in a sketchy part of Cincinnati, on the heels of a national zoo scandal no less, one might expect that our family would have been involved in...something... But, nothin. Unless you count our 19 month old grandson, Ace, throwing a full bottle of Soy Sauce at the family sitting in the booth behind us at Texas Roadhouse afterward. It's all fun and games till a condiment lands in a stranger's purse. Everybody calm down. It's not like a gorilla died or anything. 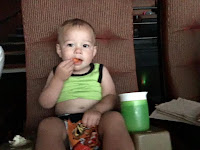 Sunday's plan: Go with Ace to see his first movie, Finding Dory.
What we didn't plan, was for him to sit like a champ in his little booster seat, quietly eating his Cheetos and sipping from his 'gulp gulp' while mesmerized by the previews. Then the movie started. And then it became a blur of dolphin-like screams, trips to the hallway, and at one point escalated to a full 32 ounce cup of Coke crashing all over the floor of the isle.
The future plan: Stick to drive-in's.

We didn't plan to eat at Long John Silvers afterward, either, but at least the irony was lost on Caymen, who would've been devastated had she heard Ron order the 10-Piece-Dory pack.

But the most unplanned part of the weekend...I'm talking, completely out of the blue, no way we could've predicted such a thing...was the outbreak of flies. Giant, black, slow-moving flies. I woke up Friday morning to find  the walls and ceiling of my massage room covered with them. I texted Ron who asked if there was also an evil voice telling me to get out of the house. Okay, first of all, that's not helpful. Secondly, somebody's seen Amityville Horror too many times. So I grabbed the hose attachment on my vacuum and sucked them up.

We came home from golfing Friday night to the walls and ceiling of my massage room covered in flies. Again. Vacuum to the rescue. Again.

Saturday night. Outbreak #4. Sweet mother of NOOOOO.
So I lay awake in bed all night researching flies on Google, as you do.

Sunday morning, Ron said, "Maybe there's something dead in our walls attracting them."
Dude, you're referring to Blow Flies. These are obviously Cluster Flies. Psh. Amateur.

Monday morning, I called my super-good friends at Orkin. They're coming tomorrow. If that doesn't work, I'll find an Exorcist.

Hey, in our family, you've gotta plan for everything.

Posted by ~Sassy~ at 3:52 PM No comments: Links to this post