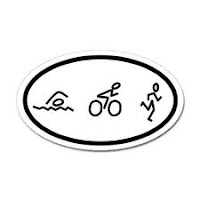 Once again, hanging out with people in their 20's led people in their 40's down a new and painful path.  This time it was a Triathlon.  At the time, it didn't sound like that big a deal.  You swim.  You bike.  You run.  Cool.  Sign us up.  And that began the Triathlon experience for myself, my husband and our son.

So for those of you who are considering this adventure, let me fill you in on what they don't tell you...

1.  Training is crucial.  We each took different approaches.  I googled and strictly followed a Triathlon training schedule that included timed bike rides, runs, lap swims, open water swims, weight lifting and rigorous combinations of each on different days. Then I researched an eating schedule for the 3 days leading up to the race and increased my carbs and salt.

My husband worked equally hard, but did his own random thing.  Sometimes he would join me. Like the day I was scheduled to do an open swim on an overcast and 65 degree day in choppy water.  We stood there on the empty beach in our bathing suits and goggles while he lectured me on the difference between "Dedicated" and "Stupidity."  He ate what he wanted and became a regular popper of B12 supplements.

Z's approach was this:  Take a total of 4 bike rides, do exactly 1 open swim, spend the day before the race at an amusement park, get a total of 4 hours sleep the night before, eat an entire pack of graham crackers for breakfast, show up for the race and hope for the best.  The joys of being 18.

2.  Be prepared to spend money.  You expect the entrance fee because that comes with the territory.  But what they don't tell you is that a new bike and running shoes will start to look like a necessity and before you know it, a Footlocker employee is giving you permission to try out the shoes by running through the mall and suddenly people are confusing you with a criminal fleeing the scene in stolen shoes.  True story.

3.  Prepare to face your secret demons.  When you register online you'll be asked to rank yourself by age or weight.  Quite the dilemma.  I either had to claim and publicly advertise that I was almost 41 or that I'm 4 pounds within eligibility to be classified as an "Athena."  That's code for "over 150 lbs."  For those of you math wizards, you now know my weight.  That's okay, because for this race, I tapped into my inner Athens goddess of warfare and proudly claimed the Athena that I am....then they went and posted my age anyway.  Gee, thanks.

4.  You will look ridiculous the day of the race.  Not only will you be required to walk a lengthy distance through a huge crowd wearing only your bathing suit, but swim caps are mandatory.  Good luck to those of us who rely on our hair to take the focus off our problem areas around the waist line.  I can only hope that my full eye make-up took the focus off the fact that I looked like a pear shaped alien.  Oh and did I mention the mandatory bike helmets?  Nobody looks good in a bike helmet, especially when you factor in that I accidentally wore mine backward during the race, because I'm just that cool.  Now picture my husband losing balance on his bike and running his head through some low hanging tree branches and I imagine we made quite the impression.  But Z pulled off the super-cool look by rocking out a shark bike helmet complete with fin.  Why didn't I think of that?

5.  Maybe most importantly, you need to be warned about this:  regardless of how full your bladder is, your body will refuse to let you urinate while you're swimming a race.  So either arrive early enough to visit the port-a-john or be ready to do a slow breast stroke in the middle and push like you're giving birth.  Don't judge, people.  You know as well as I do, my bladder would have released halfway through my bike course.  Nobody needs that.   It's not like swim pee is a new concept these days.  I mean, if it's good enough for Ryan Lochte, it's good enough for me.

6.  Finally, PMS will do you no good here.  I was ready to use that to my advantage...ya know, allow my rage to push me harder.  But when you find yourself surrounded by a group of the sweetest, kindest, most supportive and encouraging people you'll ever meet, not only will you resist the urge to throw an elbow, but you'll even feel slightly bad for the people coming up behind your slow breast stroke....
Posted by ~Sassy~ at 7:54 AM 2 comments: Links to this post

Naturally, 5 years later when Z graduated from High School and C is entering into Kindergarten, the question all Summer has been, "How will you handle your empty nest?"

I didn't know the answer because I couldn't imagine the situation.

It was pretty emotional at Open House when C looked too tiny sitting behind her large desk while her brother and sisters gathered around her for pictures.  That emotion hit me again when I looked across the room to see Z patiently explaining how she'll hang her things in her locker while she looked up at him and hung on his every word.  And again today when all 3 girls posed wearing their backpacks in the driveway before school.

Wednesday was the 1st day for everyone except the Kindergarteners and since A is doing the Post Secondary Classes (part time High School / part time College), she gets out of High School at 11am.  So Wednesday afternoon, the kick-off to my empty nest, I had 3 of our 4 children home and 2 of them were fighting.  Same thing yesterday.

What is this "empty nest" you speak of?!?

Today is C's big day.  The parents were invited to bring their child to their classroom to "say goodbye" and then stop and have some coffee and a cry if needed in the Butterfly Cafe, named for the pictures of the butterflies the kids colored during the orientation meeting on Wednesday.  A very sweet sentiment, but why in the he** would I do that to myself?!?  I don't need to cry!  I want to cry, but why give in to that?  I will not choose to focus on the part of me that's sad instead of the part of me that just watched my glowing-with-excitement 5 year old skip out the front door with a cheerful goodbye and a promise to tell me everything that happens today!  This day is about her, not me.

It's 9am.  Z is at work, the girls are at school and I've never heard the house this quiet.  So this is what an empty nest is like.  I drank my coffee and did my Beth Moore workbook in complete silence.  The house is clean and I haven't had to break up any fights.  This empty nest thing might not be such a bad thing.

But the reality is, this empty nest is quite temporary.  God in all of his infinite mercy allowed me a full day of massage clients to keep me busy.  A will be rolling back in here at 11am, the men of the family will be home by 3 and our younger girls will climb off the bus at 3:45.  Today, my nest is hoppin with activity, which makes this new transition much easier to handle.

That, and at Open House I spoke with the teacher and volunteered to spend this newly acquired spare time of mine in C's class..."We can do this the easy way or the hard way, but I'm going to be the room mother."

Several things coincided in my life recently.  1.  I started training for a Mini-Triathlon at the end of this month.  2.  My new Beth Moore workbook arrived.  3.  I took a Personality / Spiritual Gift profile test.  I have no idea what one has to do with the other, but God took over from there.  I'll share parts of my journey when / if God leads me.

One thing is very clear.  I'm in training.  Spiritually, Mentally and Physically.  I have repeatedly felt Him say, "I made you free.  Now let's make you strong."

I don't know where we're going, but I trust Him and find myself growing more and more excited.  My Beth Moore book has been feeding right into that excitement.  The study is on Esther.  The theme last week; For Such a Time as This.  The lesson; Everything about us is under God's ordained and appointed time.  From our birth to our death and everything in between.

Armed with the comforting knowledge that God is in control, I left the house to do my bike workout and almost got hit by a train.  God might not be surprised, but I got the crap scared out of me.

I broke just about every rule in the book.  I had music blaring through ear buds in both ears.  I was attempting to time my ride on country roads, which caused me to forget little details like traffic...and trains.  Finally, having never encountered a train during my workouts before, I got too comfortable and assumed the coast was always clear.

I approached the tracks and noticed a woman on the other side mowing her grass look up at me with a scared look on her face.  As my front tire crossed over the first track, I sat up on my bike, removed my ear bud and looked to the right....and found myself staring at an approaching train while the driver pulled the horn.

They say your life will flash before your eyes.  I didn't see my life.  All I saw was train.  I pedaled across the tracks, the train sped by behind me and I dropped to the grass and sobbed.  How could I be so unaware of a threat the size of a train?!?

There's an obvious lesson here that I needed reminded of:  "Be watchful, stand firm in the faith, act like men, be strong."
~1 Corinthians 16:13.

God has a plan for us and we need to be alert spiritually, mentally and physically because there's an enemy much bigger than a train who would love nothing more than to derail us.
(Pun intended.)

*I would be remiss not to point out Beth Moore's role in the whole train debacle.  If you're going to make a point of telling someone that God knows the day you're going to die, at least make it clear that it might even be today.  Geesh.