You all know Summer, right?  She's our loveable 12 year old Beagle/Dalmation mix and you might remember, she's had a pretty rough year.  It started last May when our German Shepherd puppy found rat poison as told in the original Dog Days post and we thought we might lose all 3 of our dogs, but thankfully didn't.

Things escalated last October when we thought Summer lost one of her eyes during Fright Night.  We took her to the Vet expecting the worst, but it turns out her eye's not completely gone, but rather missing part of the time and more often than not Caymen announces, "Hey!  Summer has an eye today!"  Which in Caymen's mind is the deciding factor for Summer's quality of life each day.

But for a 12 year old beagle who eats a little less, walks a little slower, tolerates an unruly rolling eye, and frequently chews her belly until we toss her a Benadryl tablet, she's holding her own, ya know?

That is until this morning when she wouldn't get off of Caymen's bed to eat her food.  No biggie.  Everybody needs to sleep in once in a while.  But 8 hours later when I heard her crying and she had to be lifted off the bed, I knew this might really be Summer's last hurrah.  So I headed for the Veterinarian's office and called Ron to meet me there while I silently cried.

Normally when we enter the Vet's office, Summer has already worked herself into an excited mess of gagging heaves and we burst into their waiting area in a spray of white froth spewing from her mouth.  But today she allowed us time to fully open the door and we walked in slowly like a normal family.  Heartbreaking.  Then they weighed her which I assumed was to ensure they administered the proper dose of farewell meds and I fought tears in my eyes.

Then we were escorted to room 3 where we waited for the doctor.
He walked in, took one look at her and said, "She's thrown her back out."
Whoa.  Wait.  Whaaat?

The next 15 minutes were filled with Ron and I being lectured on the dangers of allowing dogs to jump onto and off of furniture, followed by his plan for her extended care which included monthly shots, regular doses of anti-inflammatory pills and strict orders for us to carry her up and down stairs from here on out.

Look, we're the people who signed up to host a foreign exchange student for a summer 7 years ago and when they asked if we'd be willing to accept one with food allergies we said that won't work.  We know ourselves well enough to know that we lack adult supervision and keeping healthy people alive around here is all the responsibility we're willing to accept.  We're simple folk.  We need low maintenance.  They matched us with an awesome 14 year old named Kosuke who woke early and asked about chores. We spent the next 2 months feeding him and teaching him the joy of sleeping late and taking naps.  When he boarded the plane home, 15 lbs heavier, Ron said, "We ruined a perfectly good Japanese boy, didn't we?"  But hey, we kept him alive.

So, expensive high maintenance elderly dog?  Well, no, that won't work either.  But we're also not willing to watch that sweet dog be in pain for the rest of her days.

So $55 dollars, 1 shot and 10 days worth of anti-inflammatory pills later, we arrived back home with Summer and the agreement that we'll help her up and down stairs, give her 1/2 an aspirin twice a day as needed should she ever slip another disc...and it just so happens I'm a massage therapist so I think a special furry someone might just find herself on the receiving end of some daily treatments.

We're nothing if not willing to compromise...especially for the love of a sweet, occasionally 1-eyed, beagle. 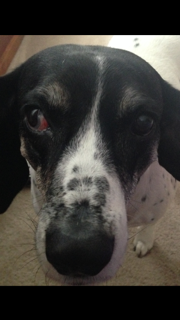 Posted by ~Sassy~ at 7:17 PM No comments: Links to this post