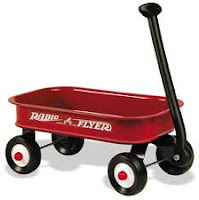 Something about our family naturally draws attention. We joke that we're The Truman Show. Well, maybe we aren't joking. I think some part of us actually believes it's true. But when the crazy stuff that happens to us happens so often, it gets easier and easier to believe.

With baseball season approaching, I can't help but think of The Dayton Dragons. The Dragons are one of those Minor League Baseball Teams that are fun to watch because they're casual, family oriented and very entertaining. Part of what makes it so unique are the games they play between innings with people picked right out of the crowd. But I'm getting ahead of myself....

Five years ago, we went to our very first game. We were running late that day, which is par for the course for our family whenever it involves my husband and his addiction to finding a parking spot that involves the least amount of walking humanly possible. (I predict that he never even comes close to those 10,000 recommended steps a day, nor does he care to.) We were running into the entrance dragging K along behind when we got stopped by an employee. Not too surprising since we were dragging a six year old by her arm while we cycled through a familiar argument involving words like 'late', 'parking', and 'Recommend 10,000 steps a day', in increasingly loud voices. But before I could explain, she asked if we would like to participate in a game between innings. Hubby and I shot suspicious glances at each other but she continued. She told us that we would get to go down onto the field and the kids would get to come too. That's when Z, A, and K weighed in on the decision with their excited, hopeful little faces. We had no choice but to agree. We were told to meet her after the third inning.

Needless to say, we didn't enjoy one minute of those first three innings. We were extremely nervous and both of us regretted what we had just agreed to, but of course we didn't even know what we had just agreed to. Hubby finally pointed out that this was no big deal. It's not like we'd know anybody there so who cares what we do in front of thousands of strangers? Shortly after he said that, a couple arrived late and began excusing themselves as they squeezed into our isle to find their seats. They attend the same church we do. As they settled into their seats, I glared at my husband. Not only did we know someone, but they were seated in our row! He noticed my glare and said, “Okay, those are bad odds.”

When the time came, we slipped out of our seats as casually and discreetly as two large adults and three fighting children could. Which is to say that there was nothing casual and/or discreet about it and by the time we escaped from the 'death glares' of the people whose feet and legs we'd just trampled, our fellow spectators were practically applauding our early departure, hoping to never see us again. Little did they know…

We were quietly led through a series of corridors that led down into the bowels of Fifth Third Stadium. When we got to the bottom, there was another couple looking equally as nervous. It is so true when they say that misery loves company because we immediately felt better. Whatever it was we were about to do, we should only have fifty percent of the crowd's attention. At least that's we told ourselves.

We were given costumes to wear. I had to wear a t-shirt that said, “Number One Mom.” Cool. I just assumed that he would have a t-shirt that said, “Number One Dad.” So imagine my shock when I came out of the dressing area to find him in a giant diaper with a bonnet on his head and carrying a huge baby bottle. His face was beet red and he was NOT a happy baby. Uh oh. Before he could blow his stack, we were quickly ushered out onto the field where two red steel Radio Flyer Wagons were waiting by home plate. Here was the deal. Hubby and the other (equally miserable diapered) guy had to straddle the wagon while we pulled them around the baseline in a race. We were all starting at home plate. He and I would race toward the first base and the other couple would race toward the third base, we would pass each other somewhere around second base and whoever got back to home plate first won. Where were our kids, you might be wondering? They got to sit with the visiting team and the Dragon's mascot. They were loving it!

As gently as he could, he lowered himself onto the little wagon. The crowd was already laughing and so was the Dragon Team who were in their positions on the field. In a panicked voice he told me he thought he heard a cracking sound. I thought, no way big boy. That's a Radio Flyer. When they said 'Go!', I took off….or tried to….but because his weight was toward the back of the wagon, as soon as I pulled, it tipped over and dumped him off the back. The word 'Crap' or something along those lines immediately came to mind when I saw the look on his face. But being the good sport that he is, he climbed back onto the wagon. This time, I might have also heard a cracking sound. I starting pulling the wagon down the baseline. To make it easier, I turned to face him in the wagon so that I could use both hands to pull the heavy wagon while I walked backward. I was trying to give reassuring smiles at my furious husband but right before my eyes I saw the wagon starting to fold up around his crotch like a taco with his legs hanging out of the sides. His eyes got huge as he felt the squeeze of the steel fold around him. To the credit of the Radio Flyer, it never did snap in half. But at least it would have put an end to this debacle. Instead, it folded in half until the wheels came slightly off the ground and the only thing touching the baseline was the steel crease in the middle, thus leaving a trench of plowed dirt down the baseline as I pulled. Somewhere behind me, I heard one of the Dragon players say, “Wow.” But the crowd was going wild. That's the first time I've ever been on the receiving end of a crowds roar and it was quite a rush. Gone were the hopes of only having half of the attention, because it's safe to say that every single eye was on us that day. The other couple easily won because somewhere between first and second base the wagon became too deeply buried to be pulled.

The race was over and everything became a blur of activity as workers rushed out to repair the field for the next inning. Some guys who helped with the entertainment, proudly displayed the broken wagon as they carried it around the field to the cheers of the crowd. I was looking for our kids and my husband was yanking his diaper and bonnet off. When we caught up with our kids in the visitors dugout, the other team thanked us for 'the best thing they'd ever seen at a game' and were kind enough to give our kids autographs.

It was finally time to head back to our seats and regain anonymity as we blended back into the crowd to enjoy the rest of the game. No such luck. When we got back to our seats, our entire section gave us a standing ovation that lasted an awkward amount of time. Apparently these same people forgot that a mere twenty minutes ago they hated our very existence and cursed the day we were born for interrupting their game and possibly crushing several toes beyond recognition. When the game resumed we joked that our fifteen minutes of fame were over. What we didn't know was that minute sixteen awaited just around the corner…

One of the fun things they do is name the 'Fan of the Game'. They flash three choices onto the giant screen, give them a funny nickname, and let the crowd choose by applause. The screen was directly behind us, so we didn't even realize this was happening until we heard that familiar 'roar' of the crowd. We slowly turned to see a giant picture of my husband in his bonnet and diaper sitting in the middle of the curled up wagon with the sub title “Man of Steel” across the bottom of the giant screen. (And he'd just been awarded the title of 'Fan of the Game'.) His 15 minutes of fame got extended even further when the clip of our race made the highlight reel and anyone attending a Dragon's Game for the next couple of years got to relive the whole thing. We haven't returned to a Dragon game since, but none of us will ever forget the year of the Draggin Wagon…and my husband is quick to remind everyone that they don't make Radio Flyers as strong as they used to.
Posted by ~Sassy~ at 1:00 PM