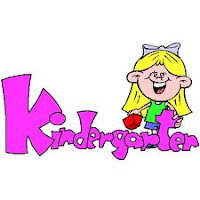 How it's possible that my youngest child is ready to start school in the Fall is hard to wrap my mind around. I know it's cliche, but it seems she was just born yesterday.

C is a product of a child born to socially relaxed parents in their mid thirties and joining 3 siblings who are significantly older than she is, one of which is an ornery teenage boy named Z.

We have created a 5 year old who can whip off a "That's what she said" response at frighteningly (in)appropriate times. This is the child who screamed "holy mudder!" when the nurse gave her a shot in the behind last summer. She's the child who stuffed the crotch of her gymnastics leotard with 2 paper towels so she could "look like daddy." I really wish I'd noticed that before her class, rather than after.

It's hard to describe her wardrobe of choice, but it's not uncommon to leave the house with her dressed as Spiderman or wearing a formal dress with ugg boots or her toe shoes. Shoes that literally look like bare feet. My son has a pair of black ones and when he exited a bathroom stall at college, the person standing at the urinal gasped to see a skinny white boy because he was expecting a barefoot black man.

She's also the one in the family who can't say the dog's name, Axel, without it sounding exactly like asshole. She leans out the back door and yells, "Come inside, asshole!" She can frequently be heard saying, "I love my asshole." And when she was describing our family to me last week, she said "We have 6 people and an asshole."

To be perfectly honest, we think it's hilarious. We also live in a home with very little adult supervision, so take that for what it's worth. But I highly doubt that the same school who got offended by our boy saying "Balls" during the NHS speech heard round the world, will appreciate the personality of our 5 old the way we do.

But here we are. Just as Z's graduating....in comes C....(dramatic music of your choice here.) If they didn't appreciate Z's methods of thinking outside of the box, they're in for a real treat with C.

She woke up early, chose a relatively normal outfit if you don't count the toe shoes, strapped on a 20 pound fully stuffed Dora The Explorer backpack and asked, "Is my butt crack showing?"
I knew we were in for a long day.

The checking in process was a blur. They scurried C away before either of us could start crying. (Okay, before I could start crying.) I was taken to the secretary's desk, handed a folder of paperwork and told to take a seat. So I pulled up a chair. Twenty minutes later, as the secretary and I sat across from each other at her desk, I glanced around and noticed the tables set up behind me, full of parents filling out their paperwork. Oh crap. I awkwardly said, "Um, I bet you wanted me to sit over there, didn't you?" She said, "Yep" and continued stapling her papers. Well, aren't we off to a banging start.

I completed the paperwork with the answering of one final question. Would you classify your child as Below Average, Average or Advanced. (Insert me proudly circling Advanced and secretly hoping the secretary was watching....and since I was still sitting at her desk, she probably was.)

Next stop, the nurses station to discuss her medical history. What I wasn't expecting was for her to have seen C's YouTube video of her singing "We don't give a damn for the whole state of Michigan." Well, now that we're fully acquainted....

Two hours later, I was sitting across from one of the Kindergarten teachers, as we reviewed some of C's answers on her tests:

1. What do fish have that make them able to swim? Legs.
2. How many legs does an elephant have? 14
3. What is a shirt made of? Cardboard.
4. What does a Fireman do? Fixes ladders.
5. If today was Saturday, what was yesterday? King's Island.
6. Name something that's round. Diamond.

Where are the questions that pertain to life? Ask her how she likes her coffee. Crap, tell her how you like yours and she'll whip you up a cup. Ask her the address of our condo in Hilton Head and be amazed.

Okay, maybe Advanced was a bit of stretch. If I could go back, I'd cross out all the choices and write in Gifted. Because I have no doubt that a Fireman fixes his ladder if it breaks, my engagement ring has a round diamond and I think changing Fridays to King's Island is nothing short of brilliant.

We left hand in hand and I asked her what she thought.

"That was freakin awesome."

After we were dunked into the water, the congregation was asked to signify their approval of church membership with "yay" or "nay." I think everyone said "yay" although as they got to know my personality, they probably wished they'd said "nay."

I was told what the baptism represented. It was a public demonstration that I'd turned my life over and asked Jesus Christ to be my Savior. I had done that, I understood that and I in no way believe that my baptism at the age of 10 didn't "count."

But as many of you know from previous posts, God and I have been on quite the journey together. Lots of ups and downs. Lessons learned. Mostly the hard way. Stubborn refusals on my part to change in certain areas. Stubborn refusals on His part to ever give up on me. Looking back at some of the events in my life, that at the time I classified as low points, actually turned into the biggest lessons and blessings of all.

Several years ago, as I journeyed through Beth Moore's Breaking Free study, God brought to mind my childhood baptism. The first thought that came to me was, "I did what they asked and they approved me for church membership." Uh Oh. Red Flag.

That was just one of many stepping stones of my life that sent an unspoken message.
1. Do what we require. 2. Get approved.

And God sent me a little message. Get re-baptized.

As with many of God's little messages, it went ignored. I felt too silly to ask my Pastor and try to explain myself. I felt fear that people would judge me and have a lot of questions about it and maybe my answers wouldn't satisfy them and they'd disagree with my decision and I wouldn't get their approval. (gasp.)

When He raised Lazarus from the dead he said, "Take off the grave clothes and let him go."
(John 11:44)

And it hit me like a brick. God has been unraveling my grave clothes. I've mentioned before how God has brought me to Freedom. Freedom from my need for approval from others. Freedom from my guilt of past mistakes. And most importantly, freedom to find my identity in Christ.

I'm living proof. If He hasn't given up on me yet, He's not going to. Christ loves me. Unconditionally. And I am free from my grave clothes.

Before I realized what I was doing, God picked me up and I met my Pastor back at his seat after the sermon and was rambling a jumbled version of my story. He didn't refuse my request, bat an eye or even gasp.

And 3 days later, in front of a hand full of people, before co-ed volleyball games began, I stood in the baptismal with Pastor Randy, who said, "I'm still going to ask you. Do you believe in Christ, the Son of the Living God?" I realized then, that I'd waited 30 years for that very moment. And I went under the water for no other reason than to proclaim the love for my Savior who loved me first...even and especially when....I don't deserve it.

PS. A few days ago, I was wondering why God moved me from my seat on that day. I'd been putting it off for years and ignoring His request, so what was happening in my life that made that particular Sunday so significant? And the answer came to me.

That was Day 7 of the Red Zone of the radical SOB / Lent promise starvation diet plan....oh my gosh, I think I fasted.
Posted by ~Sassy~ at 6:35 AM No comments: Links to this post

When last I'd left you, a friend and I were Carb-Free on Day 3 of the S.O.B, aka; the very strict 14 day South Beach Red Zone, and my husband had hidden my scale. Throw in an experiment to not eat anything after dinner in honor of Lent and I was well on my way to a Psyche Ward.

My original plan to survive without a scale was to have my husband take a picture of me every day wearing shorts and a sports bra in hopes that I would see my body melt away as the days passed. Besides the obvious humiliation of asking my husband to take my "Before" pictures dressed like a Biggest Loser contestant, they only served to make matters worse. How is looking at pictures of my boobs stuffed into a uni-bra flopped over saggy belly skin with my face looking like a Lindsay Lohan mug shot, helpful? It's not.

That phase ended about the same time the Tylenol PM phase began. Yes, that's right. I was medicating myself to sleep as a survival technique.

So far so good on my journey to better health.

On Day 5, I resorted to sneaking next door to use my neighbor's bathroom scale, much to the shock of their unsuspecting cleaning lady. Not my best moment. I'm sure it wasn't her's, either.

So on Day 6, my friend and I decided enough was enough and made some changes, starting with cutting the Red Zone down to 7 days and then moving onto the Yellow Zone, which allows the reintroduction of healthy carbs and is a much more reasonable way of life. Also, my husband gave me my scale back, if not for me, but for the sake of the relationship with our neighbor and their cleaning lady. I quit the sleeping pills cold turkey and I wasn't mad anymore. Fruit and yogurt bring me peace.

Which brings me to my update and the things I learned about myself throughout this process:

I lost 9 pounds in 2 weeks, there's a reason I don't practice Lent and I'm merely one Red Zone away from an over-the-counter drug addiction.

As for my relationship with my scale....touch it and die.
Posted by ~Sassy~ at 5:51 AM No comments: Links to this post