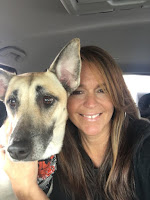 The first pet I remember as my favorite from my childhood was a blond German Shepherd mix named Bo. He was a "rescue dog" back when rescue dog meant that a stray roamed into your yard and you started feeding him and gave him a name. I can't remember if that's exactly how we got him, but it was something along those lines. 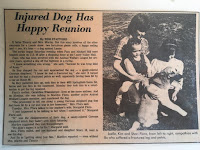 However it happened, he was meant to be ours. There was one time, he disappeared for days and we thought he was gone forever. Turns out, he'd wandered off, got his leg caught in a muskrat trap, spent who knows how long digging it up, and dragged it home. Another time, he got hit by a car on the highway beside our house, someone saw him laying injured in the ditch, picked him up, and took him to the vet. Then through a series of odd connections, a phone call between my mom who mentioned our missing dog, and my great Aunt Marilyn who'd recently heard about an injured dog that'd been found, and voila. We all ended up in the newspaper. 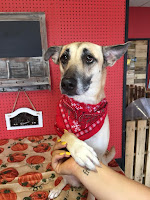 So when I was scrolling through Facebook last year and saw a shared post about a dog that Pawsitive Warriors had rescued, I'm sure you understand why I had to have her. Yeah. This dog. Hello, Bo. We meet again.

They called her "Princess Aurora" and she was described as 'A blond German Shepherd mix, calm, friendly with other dogs, gentle with children, good on a leash, and knew some commands.'
We picked her up the following day.

I don't know how it works with dogs after they die, but it was like we didn't miss a beat. She knew me and I knew her. But one thing was for certain, she wasn't having the name "Bo." And "Princess Aurora" doesn't exactly roll off the tongue and who names a dog Princess Aurora? Not me. 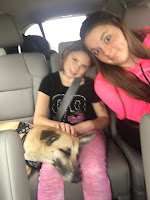 With our grandchildren's love of all things Paw Patrol in mind, Kearstin and Caymen started through the list of dog characters and she wasn't responding to any of them. And then Kearstin said, "Ryder" and that was the end of it. Of course she chose the character who isn't a dog because she doesn't think she's a dog. Aaaaand we're pretty sure whoever it was in her past that taught her how to sit and shake hands, probably used to ask her if she wanted to "go for a ride" so she might've actually been responding to that, but it doesn't matter. She chose Ryder and Ryder she is. Ryder Bo, to be exact. We debated on making her official name Bo Ryder, but Bo Ryder, the rapper, Flo Rida...too confusing. 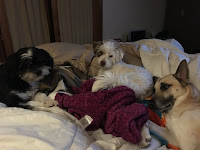 The introduction with our other dogs, Quincy & Bamberly James, was uneventful.  They simply accepted her in with no question and barely any butt sniffing. 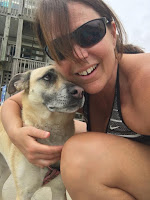 We took her to our grandson's 3rd birthday party at a church that evening, as you do, and she joined in with the family with no problems or any accidents. She was everything they described in her adoption ad.

But they didn't exactly list everything. Maybe because they didn't have her long enough to get to know her or they felt it could possibly deter potential adopters, but here are some things we've learned about Ryder this year. The hard way.

She'll feel so comfortable with you the first night, she'll pee through your pillow top mattress. That's a compliment. She feels safe.
(Oh, goody.)

When she loves you, she nips your face. Don't worry, it's gentle.
(That makes it no less terrifying when a German shepherd comes at your face with her teeth. FYI; there's a fine line between her 'love nippins' and what she tries to do to the UPS guy. That isn't love.)

She has separation anxiety.
(That's ok, so do I.) 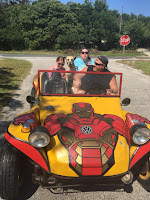 That endearing (psychotic?) quality will require you to take her on vacation with you, book her into a nearby K-9 resort, pick her up every morning as soon as they open, understand that she'll refuse to relieve herself at the aforementioned resort, thus requiring you to speed her back to your beach so she'll poop in the sand, and then you'll spend your days teaching her how to swim in your "No Pets Allowed" vacation home pool. Renting a Dune Buggy for the day?
Yeah, she'll need to go, too.

This deathly afraid of water dog will instinctively know when you plan to go out on the boat and climb in the van demanding to go. Then she'll try to claim the driver's seat before anyone else can sit down.

She can open and close doors.
(That's not as convenient as it sounds.) 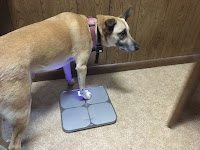 After following you to the bathroom every single time, she'll eventually begin mimicking your habits.
(She stands on this scale every morning. I kid you not.)

She'll train the other dogs to lay on the stairs in hopes of eventually maiming or killing you.
(What other reason could there possibly be?) 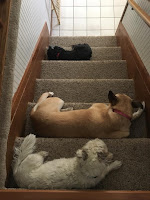 She'll take ownership of your heart before you ever realize it's happening, and you'll end up having her registered as an official "Comfort Dog" to allow you to legally take her everywhere you go. You'll tell everyone you're doing it for her, but they won't believe it. 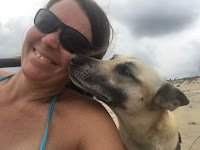 Nor should they.
Because whether or not this dog is Bo or Ryder, this rescue dog was actually waiting to rescue me.

Is there a rescue dog out there waiting for you?
Go find it. 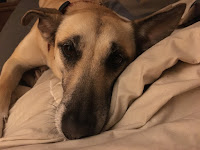 You need each other.
Posted by ~Sassy~ at 12:05 PM No comments: Links to this post