What do two friends with King's Island passes, free tickets to a Cincinnati Bengal's game whose kids returned to school do?  We plan a Mom's Day Off, of course.

There was some initial concern as to whether or not King's Island was still open during the week, but Mandi checked the calendar, then replied (and I quote)  "They open at 10."  Why would I question the person everyone would agree is considered "the stable one" of our friendship?

The day began with our first fork in the road decision:  Do we or do we not 'pack heat?' (With the CCW permit, of course.) It took us about 30 seconds to realize we'd be walking to our car alone in Cincinnati after a 7pm football game.  No brainer.  The heat's comin with us.  We are nothing if not thoroughly prepared for every scenario.

Except for the fact that as we approached King's Island, neither of us noticed the empty parking lot, nor did we wonder why zero rides were running.  (My excuse is that my bladder was coming seriously close to rupturing.  Not sure what Mandi's is.)  We passed the first closed gate without batting an eye.  We passed the second closed gate without even a question.  We came to the third and final entrance and pulled onto the property.  It wasn't until we drove past the front of the water park when we wondered why we didn't have to show our card at a gate...and why there wasn't a gate.  That's the moment we met up with the King's Island Security Guard.  Or should I say, he met up with us.

Mr. Hottest-Security-Guard-I've-Ever-Laid-Eyes-On walked toward the car...in slow motion while the Ferris Bueller song, 'Oh Yeah' played in the background.  Or at least that's how it happened in my head.  My mouth was still gaping open when he said, "The park is closed, ladies."  Mandi, oh Stable One, held it together and confidently argued, "You're joking."  (Insert the sound of crickets filling the awkward silence as the 3 of us looked around the empty amusement park that lacked only the rolling tumble weed across the deserted parking lot.)  We listened politely as he spouted some lame 'staffed by teenagers who returned to school' excuse before he turned and walked back to his car.

Mandi, rudely interrupting the 'Oh Yeah' chorus that had mysteriously resumed, turned to me and said, "I should have shown him the calendar" and she pulled it up on her phone.  "See?  It opens at 10."
Me:  "Well, the teal blue square opens at 10 and the navy blue squares open at 10, but the sky blue squares don't open at all."

Then she wondered whether or not we should have told him about "the heat" even though he wasn't a real cop.  My stance on the matter is that there were two things he definitely did not need us to show him:  the fifty shades of blue calendar and our heat.

She started making sense again when she asked if I noticed his eyes.
Me:  "They were the deepest brown eyes I've ever seen."
Mandi:  "I thought they were blue?"
(She also thought King's Island opened at 10.  Holy crap.  Maybe I'm the Stable One.)

We drove toward the front entrance of the park to solve our next problem.  Pee doesn't just go away.  Certainly, there's a bathroom at the front entrance.  There was.  It was located directly behind the giant chain fence that comes down when they're closed.  We had no choice but to leave the park and find the nearest bathroom.  Unfortunately, Mandi inadvertently got us barricaded in a fenced parking area, driving against all arrows pointing to an exit that didn't seem to exist, all the while my urine hammered relentlessly against the door threatening certain escape.  She finally stopped the car and said, "Use that tree."  I stared at the tree she was referring.  The tree standing directly beside the busy road that I'd have to climb through the fence and cross a deep muddy ravine to reach.  Add that to the list of things Mr. Hotty Guard didn't need to see.

And so the day began.  What do we do in Cincinnati with a mere 9 hours to spare before the Bengals were scheduled to kick-off?

We daintily enjoyed a picnic in the parking lot of an outlet mall.
One of us, who shall remain nameless, forgot to pack a sandwich.  Let's simply refer to her as 'The friend formerly known as stable.' 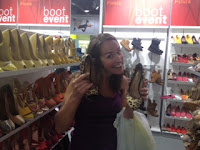 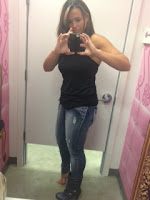 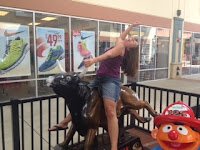 We tapped into our inner train conductor and bull rider,

before moving on to the fascinating world of Ikea.

Trying out the merchandise is strongly recommended.
I think. 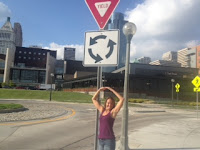 We drove down to the stadium where Mandi successfully navigated her way around the complicated Roundabout...eventually. 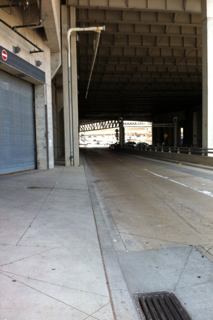 We avoided the $25 parking and found someplace "better" for $10.
Too bad stadium rules required heat to stay in the car...but once we made it back from the long dark walk alone through the streets of Cincinnati after the game, we were totally fine.
Screw you, over-priced safe parking scam. 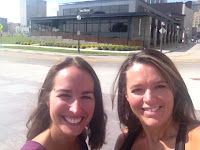 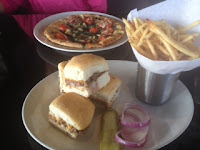 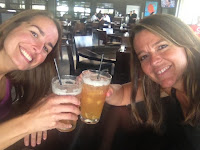 We found our way to the Yard House, enjoyed delicious food and got carded when we ordered Southern Belles.

I don't care if that's "policy"... to women everywhere, that's a compliment. 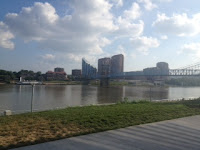 While waiting for the game, we refreshed ourselves with drinks from the fountain and sat on a swing overlooking the beautiful city. 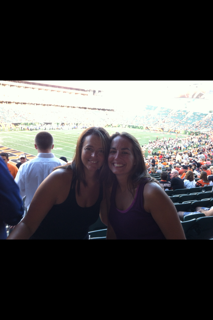 Once we found our seats, Mandi settled in to watch the game.  I settled in to watch the cheerleaders, but kept getting distracted by an annoying growling sound.  Apparently, anytime the Bengals do something good the speakers growl.  Someone needs to tell them it sounds exactly like that annoying Dyer, Garofalo, Mann & Shultz commercial and every time it happened, all I could picture was that lawyer's head morphing into a tiger.

But back to the Ben-Gal cheerleaders.  It would be awesome if they actually, well, cheered...or danced...or did something.  I had high hopes of leaving there with some new Zumba moves.  Unfortunately, hair flipping and pom pom jostling doesn't burn near as many calories as you might think.

Then Mandi informed me that after a touchdown, we should be ready to jump up and celebrate.

Ice cream cones for the drive home and our day was not only complete, but a success.  A closed amusement park will never hold us down.  We are nothing if not good on the fly.

Two women packing heat let loose on the streets of Cincinnati and we lived to tell about it.


So in case anyone is wondering: 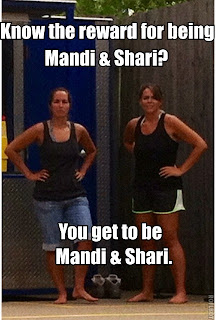 Posted by ~Sassy~ at 3:34 PM No comments: Links to this post

Just In Case You Wanted My Opinion: My Movie Review of 2 Guns

The Premise:  A DEA agent and a naval intelligence officer find themselves on the run after a botched attempt to infiltrate a drug cartel.  While fleeing, they learn the secret of their shaky alliance:  Neither knew that the other was an undercover agent.

Let's be honest.  Denzel Washington was overdue for a good movie.  Looking back on his amazing role in The Book Of Eli compared to how I felt watching him in his more recent films, Safe House and Flight, I've come to a conclusion.  I cannot condone Denzel Washington playing the role of a bad guy and/or a drunk.  Don't even get me started on his performance in Training Day.  *Shudder*  A woman can only take so much.  So call this a spoiler alert, if you will, but Denzel Washington plays a good great guy in 2 Guns and fills the big screen with all the awesomeness we've come to expect in classic hero, Denzel.

I'm not saying I don't hold Mark Wahlberg to a standard, but let's just say Mark Wahlberg seems to get away with pretty much anything he wants.  I love to watch him play the good guy, but wouldn't ya know, I don't mind watching him play the bad guy.  Chalk up my hypocrisy to one of those questions on this earth we might never understand...or attribute it to his universal hotness in all circumstances...the bottom line is this:  I root for Mark Walhlberg regardless of whether he's playing a questionable cop in The Departed, the heroic brother-in-law who saved his family in Contraband or an unshaven, ball cap wearing, naval officer, with a habitual flirtatious wink and the ability to accurately shoot the heads off a partially buried row of chickens...I'll stop there, heaven forbid I slip another spoiler alert.
PETA:  Save it.  I didn't make the movie.

Denzel Washington and Mark Wahlberg are a match made in movie heaven.  This action packed story filled with humor, twists and turns will draw you in and hold you there till the end.

To the woman sitting directly behind me who loudly asked questions nonstop throughout the entire movie, allow me to help you out:
Yes, those are good guys, some guys in the navy are bad, that was a setup, that was the burned down restaurant, they killed that lady, she's wearing that ring, why yes that is a box of Captain Crunch in that scene, yep that was a nipple...and while we're at it, yes, every single person in this theater hates you right now.

PUBLIC SERVICE ANNOUNCEMENT:
If you tend to loudly commentate throughout a movie in a theater,
KNOCK. THAT. CRAP. OFF.

And, no, this isn't my PMS talking.  It's the consensus of movie goers everywhere who spend the movie listening to your voice while plotting parking lot revenge and when the credits roll lean over to their husband and ask,
"You've got my back if this goes bad, right?"