I recently passed the halfway point of my 41st year and am rapidly sliding down the slope to 42.  When I was in my 30's, I completely dreaded my 40's.  Let's be honest, the "experts" don't exactly paint a pretty picture of what to expect.  According to them, get ready for a decrease in eyesight, hearing, and height, an increase in fatigue and grey hair, as well as wrinkles, and thanks to a screeching halt in our metabolism, we should prepare ourselves for the middle-age spread, which is the sudden widening of everything...except our cleavage which mysteriously closes in to resemble less of a sexy V and more of a puckered butt crack.

But here's my thought on the matter.  I think they're wrong, and as long as my sense of denial is stronger than my ever decreasing hearing, I'm right.

Granted, it's an awkward phase of life when your period is 5 days late and you're unsure whether you're pregnant or menopausal until your husband finally tells you to go buy a test.
FYI; they don't sell home menopause tests.  If I can spare even one person the humiliation of asking Ryan at Rite Aide, my job here is done.

So each time one of my daughters brings home her new cheerleading uniform, I  put on mine from 1989 and enforce mandatory Mother/Daughter cheer photos, because 1.  I know my daughters love it and 2.  Once a cheerleader, always a cheerleader.

Speaking of the inner cheer girl, I was recently presented with an opportunity to become a Zumba instructor.  My repressed cheerleader sprang to the surface and (loudly) agreed (while jumping up and down and clapping) before my 41 year old insecurities...and body...had a chance to think it through.

My point?  Let's all stop acting our age and start deciding that if God opens a door, we're gonna boldly run through it...possibly dressed in an old cheerleading uniform.

Sure, physically I might be greying, fatiguing, spreading and puckering, but dag on it, I'm not gonna let that stop me from having fun.  I'll either go down dancing my zebra-striped-spandexed-butt off, stuck in the mud of a Warrior Dash or maybe face planting in the sand during volleyball tournaments, as happened 2 weeks ago when a sudden storm blew in and I was hit in the back of the head with a flying gazebo.

That had nothing to do with my age.  I just didn't see the damn thing coming.  But before you blame that on decreased sight, when I opened my sand crusted eyes I clearly saw my 41 year old boob flopped out of my tank top and lying completely exposed in the sand like a dead fish.

Trust me.  My eyesight is fine.  Unfortunately. 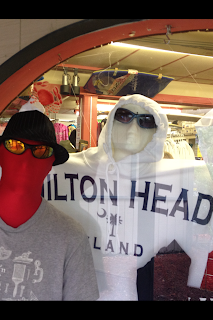 We recently returned from our annual family vacation to Hilton Head, SC.  It's an upscale island we've chosen to expose to some redneck fun a couple weeks out of the year.  We're generous like that.

I decided to kick off the week by getting a massage on the first day.  I have a favorite massage spot and look forward to it every year.  I called ahead and was told my therapist would be Peter.  The good news is that Peter is an amazing massage therapist.  The bad news is that Peter was the therapist I had last year when I'd gone without carbs for a month in prep for our trip, ate a pack of Oreos the night before my appointment and lay on the heated table for an hour, feeling my digestive system rebel with gurgling as I desperately clenched and prayed that my bowels didn't explode while Peter performed deep tissue massage on my back.  Hopefully, Peter didn't recognize me this year with my completely relaxed butt cheeks. 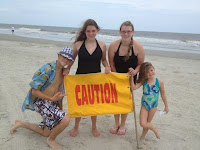 Off to a smooth start.  But when our condo phone began repeatedly ringing with hang-ups, a large yellow Caution sign appeared on our beach, and a sudden lightening storm cropped up while we were in the hot tub, all on the first day, I knew we were in for a typical week on Hilton Head Island.

This year, we escalated the hilarity by renting a tandem bike for Zac and me and learned the hard way that we needed to be in the lead position on our family bike rides because once we got on and started pedaling, we had very little control over the situation.  That led to being the cause of two barely missed car accidents, getting flipped off twice and loudly bursting through a clearing of the woods onto a playground and realizing we just crashed a child's birthday party.  Clowns are here, kids.  On the return trip, the obstacle became trying to squeeze through the security guardrails of our resort.  Individually, the bike fit through the crack, Zac fit through the crack and even I fit through the crack.  So it's a complete mystery as to why the three of us as a unit crashed into the gate, every single time.

By the end of the week, we'd been caught in torrential downpours while taking Senior pictures of Aubrey...in a white dress...requiring us to sprint 30 minutes back down the beach, we'd single handedly turned our neighbors against us when Zac saw a flock of ducks near our patio and took chase before realizing the people above us were actually feeding them, and we witnessed people even more irresponsible than us setting off fireworks on the beach.  I didn't think that was possible.

Yep, pretty normal stuff by our standard.  But there was one incident that was an absolute standout this year.  Just like last year, Zac donned his morph suit and stood outside one of the stores of an outdoor shopping center and pretended to be a mannequin, subtly changing positions or waving and enteraining the shoppers.  Everyone loved it.  Unfortunately, one of the employees called security.  Caymen and I were sitting on a nearby bench keeping watch and I saw the security guard talking to the employees and looking in Zac's direction.  We came up with a super-secret-unbreakable-code-phrase for just such an occasion.  "Dude, Security."  Complicated, I know.  And with that, the chase was on.  It was obvious this guy wasn't interested in giving Zac a friendly warning.  This cop wannabe had a real life super cool walkie talkie on his shoulder and he was out for mannequin blood.  He was living for a moment like this.  This was his time to shine and later tell his family how he single handedly saved the entire island from a living breathing mannquin...who by the time he exaggerated his heroics, was armed and dangerous.  I'm glad we could make his day.

In the blink of an eye, Caymen and I took off in one direction, Zac unzipped his hood and took off in the other direction, surrounded by Ron, Aubrey and Kearstin, and made his way to the parking lot.  By the time Caymen and I jumped into our mini-van-turned-getaway-vehicle, Zac was stripped down to his shorts and we were just another vacationing family exiting the plaza, leaving the manhunt in our wake.  Add "Successfully alluded the law" to his already impressive resume of life experiences.

The final touch to our week came on the last day when Caymen got stung by a jelly fish.

Looking back, I can say we learned 2 very important things this trip:
1.  Street entertaining is strictly forbidden on Hilton Head Island.
2.  Lifeguards keep a vinegar mixture on hand, which eliminated the need for anyone to pee on Caymen's leg.

Both of which we learned the hard way. 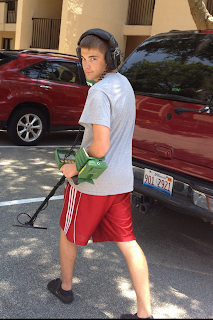 Consider him Charmed and Dangerous.

Just In Case You Wanted My Opinion; My movie review of White House Down 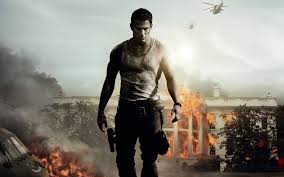 The Premise:  While on a tour of the white house with his young daughter, a capitol policeman springs into action to save his child and protect the president from a group of heavily armed paramilitary invaders.

You knew this review was coming, right?  Despite my hesitation after negatively reviewing a string of Channing Tatum let-downs, I can't pass up the opportunity to see him via big screen.  Don't get me wrong.  I don't blame Channing for most of the recent disappointments.  It wasn't his fault that they completely misrepresented The Vow and I doubt it was his choice to get offed within the first 15 minutes of G.I Joe.  I do hold him somewhat responsible for the Magic Mike debacle, seeing as it was based on his life story.  I mean come on, even if a baby pig really did eat vomit at some point in your days as an exotic dancer, must it be included in your life story?  Your female fan base votes no.

With all that in mind, the first time I saw the trailer for White House Down, I decided to stay level headed and not get sucked into those green eyes and bulging biceps, but before I knew what was happening, I felt my husband staring at me and realized my head was tilted all the way to the side with my jaw slightly dropped open and a glazed look in my eyes.  I guess my impartiality went by the wayside.

The premise of the movie is self-explanatory.  Tons of action and excitement that both men and women will enjoy, albeit for different reasons.  Jamie Foxx plays a great president and his comedic timing and natural rapport with Channing laces unexpected humor throughout the movie.  Realistically, Channing should have been killed during most of the shootouts, because I'm sorry, you just can't dodge that many bullets.  But if we're talking realistically, I would have rioted the theater had that happened.

We don't ask much from Channing Tatum movies.  We want to see him charming and funny, playing the hero, walking away from fire in slow motion and dive rolling through a spray of bullets.  We want to see him protecting a child, outwitting the enemy and fighting hand to hand, all while profusely sweating.  We want to see him driving fast, shooting automatic weapons, slowly climbing out of a swimming pool soaking wet and pulling on a bullet proof vest over a sweat-drenched tank top that's clinging to his chest.
...give me just a second here...

My Grade for White House Down:  A+
Because somebody finally gave us exactly what we want.
Posted by ~Sassy~ at 9:05 AM No comments: Links to this post