There are 2 types of people in this world. Those who are mentally stable enough for Fitbit ownership, and those who are not.
Guess which category I fall into.

To be honest, I thought a Fibit was a bracelet old people wore to encourage them to walk around. And before you tell me I'm a grandmother of 2, let me first tell you to shut your pie hole.

Anyhoo, I was surprised when my super cool grown kids began wearing them, and then Zac showed me all of it's features. Being the person I am, who daily monitors my weight on a scale that ridicules me by blinking red or green, I became convinced that I now also needed to track my calories eaten, calories allotted, resting bpm, sleep patterns, exact number of steps I take each day, as well as the breakdown of miles I've walked, and floors I've climbed, all of which is rewarded with invisible badges and a slightly startling vibration that for someone who's been electrocuted as many times as I have, sends a brief panic through my soul every time I reach my goal.

I might be a bit of an extreme personality.
I know. I'm as surprised as you are.

Needless to say, Ron and I became proud Fitbit owners, which some would argue only feeds my obsessive tendencies, but I would argue that it wouldn't effect anyone, so mind yo business...until the night I received a Fitbit notification that Zac challenged me in a Workweek Hustle. What.Is.Thissss?

Well, I'll tell you what that was. A gauntlet thrown. It was the 2016 adult version of Red Rover and I'd just been called over. The unleashing of a very dark competitive side and with it came phrases like, 'Bring it' and 'Goin down'.

And so it began.
The repetitive laps around our dining room table to Pitbull songs. The constant strolling of the grandchildren up and down the driveway. The blisters. The shin splints. The tan line dilemma. The thought that I might have to quit writing. The realization that my tombstone could say, 'Death by Fitbit.' Kearstin's broken toe against the coffee table when she tried to keep up with me. The finding of my husband locked in our bedroom taking secret steps. The jogging in place while we fight over keeping secrets. The marriage changing moment when we both realized that sex counts steps...for the person on top. Lying in bed at 11:30 checking everyone's step counts. Jumping up for final laps before the clock strikes midnight. Fitbit egging it all on with rude taunts that someone just 'blew by me' or that someone else was 'breathing down my neck.'

All of which can lead to sitting on the toilet the next morning and receiving the notification that someone snagged first because they waited until after midnight to sync their damn fitbit.

So it should really come as no surprise when I, the person who'd rather take a fork to the eye than go to the doctor, woke my husband and asked him to take me to the emergency room, and then actually used the word debilitating when the doctor asked me to describe the pain in my lower back.
But hey, I beat the person who'd arrived in the speeding ambulance to the front desk, so boom.

Diagnosis:
Kidney stone, no.
Gallbladder, no.
Pulled muscle and thoracic strain...ding ding ding, we have a winner. 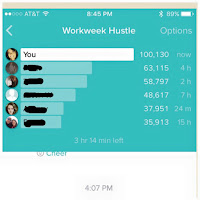 ﻿
Okay, I added that last part. I'm sure the doctor just forgot to say that.
﻿