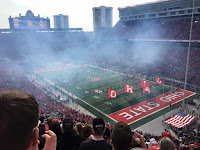 Things I've learned about my husband:

1. Football is considered a life source and therefore he eats, breathes, and lives it. More specifically, football played by THE Ohio State Buckeyes. (Emphasis THE, pronounced thee, for some reason.)

2. Nothing elicits an eye roll from him faster than a tall-feather-hatted marching band UNLESS it's THE(E) Ohio State Band. aka; The Best Damn Band In The Land. (Not THEE best damn band. Just The. Keep it straight.) And you will stand on your feet for the damn band, or else.

Things he's learned about me:
1. I read books during football games.
Don't judge me. I cheered for football in high school, I force my daughters to pose for annual cheer uniform photos with me wearing mine...and sometimes theirs just to shake things up...and I still remember the routine, and have been known to perform it, when the Buckeyes score, because the OSU tune is the same as Shawnee's fight song. So, play the song and I will dance, but as for watching the game, no. But I'm still totally cool, just so we're clear.

2. If he doesn't roll his eyes when I pull out my book, I won't roll mine when the drum major high-kick-leads the tuba player to dot the "i" in script Ohio. I'm not saying they're not the best damn band, because they really are, but I don't get all teary-eyed.

With our agreements in place, we try to attend a couple games a year, because according to him, there's nothing like watching the game in "the shoe." See, it's called the shoe because the stadium is shaped like a horse shoe, not a tennis shoe, and that's a really dumb question to ask, so don't. Not that I did. Just, don't. 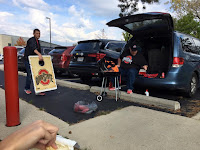 Last month, we attended a game with our son and daughter-in-law, and we decided to give tailgating a try, because we've never done that. So, Ron bought a tiny charcoal grill, we threw some meat in a cooler, and cornhole boards in the back of the van, because we're not gonna look like virgin tailgaters, peeps. 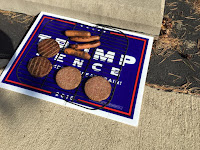 That is, until our flame kept going out, so we gathered dry pine needles to drop in there and then we'd douse the grill with lighter fluid, (between the hamburgers and hot dogs, we're not idiots), dodge the shooting flames, and try not to make a scene. Then we figured out that you should wait until your charcoals actually start burning before you put the meat on the grill, so we used sticks to lift the searing hot grate of meat off the grill and put it on the ground on a campaign sign we conveniently had in the back of the van, because you never know when you might need one. Remind me to throw a pair of pot holders in there, would ya?

We choked down our smoke-flavored-chemical-seasoned meat off the ground and walked to the stadium like a boss. We're like tailgating pros now.

We found our seats and it occurred to me. I forgot a book. I was sitting in a shoe with no freaking book. And then it got worse. A loud obnoxious guy directly behind me began frequently standing up and yelling, "It's GAAAAAAAME DAYYYYY" in case the other 100,000 people there didn't know that, because he's helpful. So to escape the situation, I made trips to the bathroom with my daughter-in-law, but 2 out of 2 times, I got hit on, because I wore the only red thing I own, and apparently a tank top that says 'Take Me To The Weekend' makes for a perfect invitation for creepers to offer to take me. Ron scolded me for wearing it and stopped letting me go to the bathroom. I think that's called victim blaming.

So there I was, grounded to my seat, searching for something to busy myself. And that's when I saw him. The kid sitting next to Zac, and I knew he looked like somebody, I just couldn't put my finger on who the somebody was. All I knew was that the somebody was a cartoon kid. Not a cartoon cartoon. But like, a pixel cartoon. Zac agreed and thought maybe the Polar Express kid, so I googled him but that wasn't it. Then I did that thing where you stare at somebody and try imagining them in different scenes (insert loud intrusive "It's GAAAAAAME DAYYYY" from over my shoulder...SHUT UP!) and then I closed my eyes and began picturing him talking to Santa and....O.M.G!!! He's the Rise Of The Guardians kid!!!

And there it was. My mission was to get a picture of the real life pixel kid, who became my hero in the final battle scene of The Rise Of The Guardians, when he looked the boogie man in the face and said, "I do believe in you. I'm just not afraid of you." Because that's what I envision myself saying every time I square off with Satan.

Leave me alone, you wouldn't survive a day in my head. The voices alone would eat you alive.

Anywho, the real life pixel kid was not makin' a discreet photo op easy on me. Just look over here at my phone without realizing I'm taking your picture, dammit!!
"It's GAAAAAAAME DAYYYYYY"....SHUTTTT.UUUP!!! 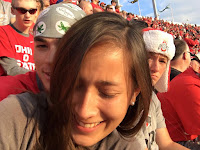 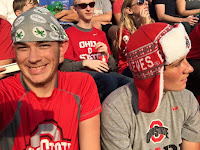 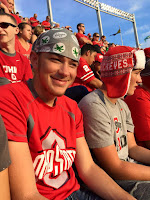 By 4th quarter, I'd had enough. This was gonna happen one way or the other. I tried the one way. Time to try the other. The straight forward approach. By that point, some people in the seats in front of us had left, so Zac and Barbara moved down to make more room. That placed me directly beside pixel.

Be friendly, not creepy. The kid's like 15 and I'm wearing a shirt with the words "Take me" across my newly-implanted chest. Play it cool. Be Casual. This calls for discretion. Here goes...

"So. Has anyone ever told you that you look just like the pixel kid on The Rise Of The Guardians?"

Ok, so I suck at discretion.

He answered, "No, but that sounds like something my Grandma Judy would say."

"It's GAAAAME DAYYYYY"....I'm going to hurt you in the parking lot. 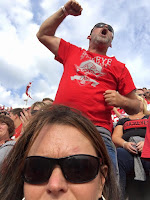 So today Ron and Zac are in the shoe for the big Ohio State/Michigan Game. They didn't take me.

Posted by ~Sassy~ at 8:41 AM No comments: Links to this post

50 Things I'd Rather Do Than Vote For Hillary

Despite my strong opinions, I typically avoid politics on my blog, simply because I’d rather not deal with the divisive backlash. You’ll never sway my personal convictions, I’m not arrogant enough to believe I’ll sway yours, and so if we don’t agree, that’s cool, and let’s still be friends.

That being said, my niece recently posted an article titled ‘100 Things I Would Rather Do Than Vote For Hillary.’ It was a cute read, I commented that I wish I’d thought of writing it, and she encouraged me to write my own.

First, this is dedicated to my niece, Abigail, who basically gave me permission to go to my dark place of distasteful things and have a little fun.
Second, let’s all note my different title, because plagiarism.
Third, I stand behind every single word of this, just so we’re clear.

So here are (just) 50 (of the endless) things I’d rather do than vote for Hillary:

Watch The Walking Dead beating scene
Sit beside a phlegmy cougher on a New York subway
Crank open my own vagina for my annual exam
Watch an NBC live televised musical
Lose every FitBit challenge forever
Answer the door for Jehovah’s Witnesses
Join my husband’s Clash Of Clans
Fill out duplicate forms for all 4 of my children at the Pediatrician’s office
Learn Common Core
Become a volunteer lice and nit remover
Find a stranger’s hair in every meal forever
Let a Kirby Vacuum salesman into my house
Walk into a South Carolina police station dressed as a clown
Put Ryan Lochte on the stand in my defense
Let my husband play with fireworks
Join a gluten-free support group
Lead a protest for Harambe at the Cincinnati Zoo
Let people take bites of my food off of my fork
Be friends with Whoopie Goldberg
Boycott double cheeseburgers
Give up my scale
Star in an “I have genital herpes” commercial
Sit my butt all the way down on a Taco Bell toilet seat
Eat at Panera Bread
Be Kody Brown’s 5th sister wife
Seek marital counseling from Jim Bob Duggar
Home School Caillou
Choose the longest line with the friendliest cashier at Walmart
Open a text from Anthony Weiner
Lick the Chuckie Cheese play land tunnels
Be politically correct for a day
Copy and Paste Facebook privacy rights declarations
Eat a Michelle Obama’s healthy school lunch
Dry my jeans the day before Thanksgiving
Weigh myself fully clothed and shoe’d
Go shopping on Black Friday
Answer my cell phone
Watch Frozen
Eat in silence with only the sounds of someone chewing
Comment something nice under someone’s status who’s threatening to leave facebook
Ring a cowbell at a football game
Let the amusement park photographer “take a quick pic” as we walk through the gate
Give up tweezers for a week
Host a home sales party
Give a sales person the names and emails of my 5 closest friends
Eat the cake without the icing
Click a random email link to “claim a free gift card”
Use the bathroom at Target
Go an entire day without offending anyone
Vote for Trump. Obviously.

Posted by ~Sassy~ at 7:15 AM No comments: Links to this post