Writing our stories was always intended for my kids and grandkids to have a small piece of our family history to share forever. To pass on funny memories and maybe even some life lessons from my perspective along the way. It had nothing to do with followers, much less a career, although I'm grateful for both. But this particular entry is more so for my family. I'm sharing it in honor of our son and daughter-in-law, who chose to elope 3 years ago. I'm sharing it in honor of our daughter and son-in-law, who opted for an Ohio State themed wedding, where the women went barefoot and the men wore baseball caps. And I'm sharing it in honor of our 2 daughters still at home, to reinforce the message we've always taught our kids:
Don't just think outside of the box. Destroy the box.

God might use this in some way for you, too. That'd be great. It's also possible this might cause you to look at me differently or judge me for it, but I basically roll that dice every time I sit down at my computer, so here we go.

Our wedding anniversary is today.
24 years ago, Ron and I had a wedding.

I treasure it as the day I legally married my best friend, and we celebrate it accordingly, but we all know the wedding anniversary symbolizes the wedding and that's the part I could've done without.

As is probably the case with most weddings, everyone had opinions, all of which were openly shared with the 2 young (or as many would've said, "too young") delusional engaged people who obviously had no idea what was "proper."

You see, we were the couple who wanted to elope, but that wasn't an option, (what would people think?) anymore than Ron wearing his baseball cap at our wedding was an option. (in a church? never!)

A few of our other controversial preferences were to have only one bridesmaid and one groomsman, (rude!), black for our wedding color (insert all the "symbolic" jokes here), we wanted our pictures taken before the wedding (yes, he saw me in my dress before I walked down the isle, *gasp!*), chose our favorite song by heavy metal band 'Firehouse' to play after our vows (scandalous!), and wanted dancing at our reception. (Sweet mother, nooo...*thunk*) Thank goodness I didn't start drinking until I was 40, because I feel like I would've lost the margarita battle of 1993.

As it turns out, all of those things are now totally Pinterest Wedding Approved. See? We were just ahead of our time.

But let's be perfectly honest here. Judgment of our wedding choices was simply a symptom of deeper issues. The bottom line was, there were people who didn't approve of circumstances surrounding our marriage and tensions were running at an all-time high. Therefore, our wedding is forever tainted by the memories of disapproval of others. Not exactly a feel-good anniversary story to publicly share, right? And that's why I haven't.

So when I read a blog entry by Beth Moore last month and hers was laced with the same undercurrent, I was shocked. Beth Moore? Thee Beth Moore had people throwing shade at her wedding? Maybe there's more of us out there than we think.

I mean, I get it. We were seemingly the most mismatched couple in the history of ever. Totally non-traditional. Unconventional. Many would argue, rebellious. Solely focused on loving life and loving each other. Everything was laughable. To heck with what people thought. Clearly in denial of the trials that awaited us. All of which was chalked up to the naivety of being 21 and carelessly in love. Even God must've cringed when our worlds collided, right?

Or is it possible, God brought 2 broken pieces together to make a whole?

My strengths where he's weak. His strengths to carry me in my weaknesses. Both of our strengths to stand against outside forces that continually try to divide us.

And God is the cord that ties the whole thing together where we're both weak, pretty much suck, and without Him, would've shredded each other a long time ago.

God was there when we met on a blind date. He created the magnetic force that wouldn't allow us to remain apart when Ron left for the military. He didn't walk away or turn His back on us when we chose to go against His perfect plan by moving in together a month before our wedding, and He not only forgave us, but blessed us. He was there when I walked down the isle in a white wedding gown and He looked at me with love instead of judgment and disdain. He was there when my cousin Susan, dressed in black, stood by my side as my only bridesmaid that day, as He knew she'd be the one who'd always remain there. He was there when my heart thumped to the beat of a 90's love song as it filled the sanctuary after Ron and I said our vows, and He was watching when, more often than not, we were the only ones dancing at our reception.

Then in 1998, He took us by the hand and led us to our church family, who opened their arms unconditionally to a couple of misfits like us, who to this day can still be found sitting in the front row center, my husband raising his hands in worship, with a ball cap on his head.
"...The Lord does not look at the things people look at. People look at the outward appearance, but the Lord looks at the heart."
~1 Samuel 16:7~

24 years later, 4 kids, a daughter-in-law, a son-in-law, and 2 grandkids so far.
Started with a mismatched couple. Grew into a family. Non-traditional. Unconventional. Many might argue rebellious. Focused on loving life and loving each other. Everything is laughable. To heck with what people think. Possibly in denial of the trials that await us, which some might chalk up to the naivety of being 45 and still carelessly in love.

If anyone disapproves of us at this stage of the game, I've got good news for everyone.
The part about "for better or for worse till death do us part" doesn't apply to you.
Raise your margaritas. Cheers all around.

God is here. Every single day, every single moment, every failure, choice, regret, and success.
He is here. Always has been. Always will be.

Thousands of things I'd change if I could.
A million things I wouldn't.
I'm sure the same will be said over the next 24 years.
Welcome to life.

But today isn't about regrets. It's about celebrating a love that beat the odds, a lifetime of both good and bad choices that God is using to mold us into who He desires us to be, a determination to keep submitting to Him, always trying to do better, and looking ahead to another year of loving each other even more fiercely than the last.

Now if you'll excuse us, we've got a song to dance to...and I've got a killer air guitar solo that I held back at the wedding, speaking of regrets.

﻿
A big THANK YOU to Zac for putting the song from our wedding to our picture dancing at Aubrey's.

Posted by ~Sassy~ at 4:09 AM No comments: Links to this post

Do any of you wives out there ever feel like you share a room with a messy dorm mate rather than a husband? Or is that basically the same thing?

According to talk show segments everywhere, our bedroom is supposed to be a "sanctuary." A "getaway." An "escape." Well, that pretty much described every other room in our house except our bedroom. This is what I'm talking about... 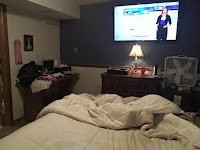 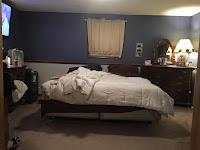 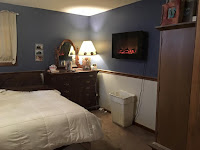 Guess which side of the room is whose. Granted, it could've been much worse, and 10 minutes before I straightened it up to take pictures, it was. But the clutter, piles, and disorganization, not to mention the mosh tosh of mismatched furniture didn't feel like a sanctuary to me...maybe more of an asylum.

So I did what women with zero design talent do. I turned to Pinterest. And it didn't take long to find a bedroom that looked like actual grown-ups lived there and I thought that'd be pretty cool.

So it was off to choose furniture and match the paint color, which turned out to be called Ground Nutmeg and that felt very grown-up when I proudly handed the sample cards to the paint desk guy..."As you can see, we opted for the ground nutmeg motif with Chantilly lace trim." I sounded more mature already.

Well, once you have the furniture and paint, it makes no difference that it's 8 days before Christmas and your house is in full on holiday upheaval. You start rippin' sh*t up and by 7pm on Friday evening, we were elbow deep and fully committed, like it or not.
And Ron decided he did not. 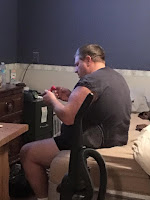 Hey, part of maturity is deciding we ain't goin' into debt over this crap. So I was lathering Chantilly lace over top of the original stained chair rail trying to decide the line between tastefully-distressed and got-tired-of-putting-coats-of-white-paint-over-brown-stain, when I glanced back to see how Ron was doing with the ground nutmeg and found him sitting on our bed trying to get a treat out of a dog kong. This picture was taken at the 8 minute mark. It went on for 3 more minutes after that.
But he got the treat out, so check that off his bucket list.

He finally started painting and announced, "It looks like poop."

No it doesn't. You just need to put it on thicker.

Off to Walmart he went to buy a paint sprayer, accidentally held it backward, and painted his chest. He looked down at himself and said, "It still looks like poop."

No it doesn't, because Pinterest wouldn't do that to me. Now put it on the walls and stop screwin' around.

By the end of the weekend, our walls were done, most of our furniture was put together, and we were down to the bed. But when the box springs wouldn't fit into the frames, he admitted that he actually bought 2 single frames with the idea to design his own super tall mega bed. Soooo...2 single bed frames and countless stacks of boards and screws later, our bed is almost as tall as our bedside lamps, my feet can almost reach the top of my hutch, and the dogs are forever banished to the floor because they can't jump that high. Hell, I can barely climb up there. And thankfully we removed our ceiling fan last summer or decapitation during sex would become a probable threat. 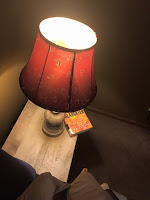 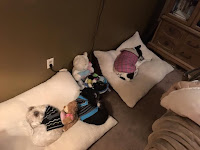 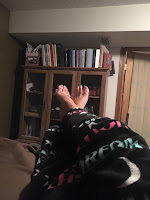 But the bedroom is done. Maybe not exactly Pinterest worthy, but it certainly meets my amateur standards and I'm quite happy with our little getaway. 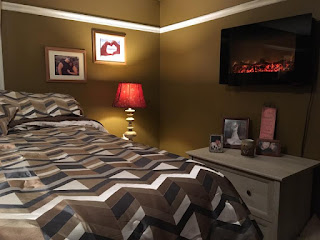 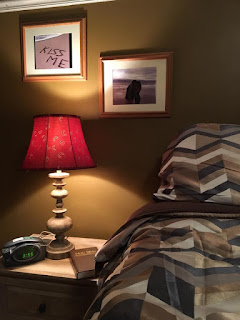 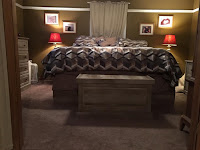 I don't even care that I thought Summer's tail was covered in dried diarrhea before realizing she'd rubbed up against the wet paint on our walls. 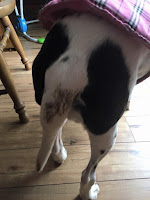 I mean, so what if our sanctuary is done in shades of poop and white...
if Pinterest says it's on-trend, IT'S ON-TREND, DAMMIT.

Posted by ~Sassy~ at 8:01 AM No comments: Links to this post