Last fall after a nudge from God (and shove from my husband), I made the decision to resign my Massage Therapist position at the salon, decrease the massage hours in my home office to one day a week and start steering my career into the writing industry full time in 2015.

In January, a friend sent me a link to a site called HaHas for HooHas and encouraged me to submit some stories. (Thank you, JK!) HooHas? You have my attention. So I checked it out, absolutely loved their humor and their content was right up my alley. They were accepting guest submissions, but the part about applying to become a regular writer for the site is what caught my eye. Hey, it's the writing industry. I'm gonna have to hear 1,000 no's before I hear a yes. May as well go for it and get my 1st no out of the way. So I emailed the info they requested, but didn't hear back.

I convinced myself that I probably misunderstood God's nudge toward writing. People would ask how the writing's going. Ummm...gooooood...yeah, goin good. When actually I was quite happy babysitting my grandson 2 days a week and posting on here every so often. So was I scared of the writing or content without it? To be honest, both. See on one hand, I nearly have a breakdown every time I post something here, because I don't trust my ability. On the other hand, I've become so trusting of God that I'm to a place in my life that no matter what it is, if God wants me to have it, He'll see that I get it in His time and if He isn't ready for me to have it, then I don't want it. Therefore, I'm not real great at blindly kicking random doors of opportunity.  BUT, if one cracks open...

In the middle of May, I heard from HooHas. They checked out my blog and asked for a submission that I would write specifically for their site. Now here's where things got a little confusing. I thought it was like a sample that the heads of the site would read. Just them. Which is how I presented it to Ron when I convinced him to let me write 'Roid Rage'...9 Reasons My Husband's Hemorrhoid Pisses Me Off ...that he refused to let me write for my own blog because I average 500 readers. But "go big or go home" I told him and it'd probably only be like 3 people reading it. Ya know. A test piece. So when it went public on May 18th for their 107,000+  readers, my blog site lit up with hits and FB friend requests from complete strangers came pouring in, I got an immediate case of explosive diarrhea knowing I had to call him at work and break the news.
Um, babe? Funny story. You sitting down?

And that kicked off my month long interview process of weekly submissions.

Marital tension aside, I was floating on air. I couldn't stop looking at the climbing number of likes, and shares, and the comments! Holy crap, these people love me!

But the following week I was petrified to submit my 2nd article and voiced my concerns to the site owner. How do I compete with the success of my last post? My husband's hemorrhoid was huge...um, I mean the response. She gave me exactly the advice I needed to hear. Trying to top a successful post is a never ending battle you never win. Some go viral. Some completely bomb. That's just how it goes and I can't worry about it. My job is to keep writing.

So I had permission to fail which was just the boost I needed and the female population at large were hailing me a hero for outing my husband's hemorrhoid, so what could go wrong?  You know the bible verse about the pride and the fall thing?  Yeah, about that...

That night, I woke up with a brilliant idea. (Note to self; nothing brilliant happens at 2am.) A long time ago, I wrote a private list of things that get on my nerves at church and it circulated amongst my innermost friends. They know me well, understood it was all in good fun and according to them, it was hilarious. (All 2 of them thought so). But how do I go public with such a private list and not lose 300 of my FB friends I attend church with in the process? Enter Brilliant Idea #2. Let everyone in on it. Throw it out as a FB status asking them what gets on their nerves and let them write it for me. The best kept secret is the one people think they're in on. And voila, "20 Things That Annoy The Crap Out Of Us At Church" was born.

I was in Hilton Head vacationing with my family when it went public. Within 1 minute of it being published, there were 24 comments. By the 2nd comment referring to me as a pagan, I threw up in my mouth. This was bad. This was reeeeeaaaaal bad. I contacted the site owner. Um, people are taking this way too seriously. Should I explain myself? She said, "No. You should STOP READING THE COMMENTS." I ran downstairs to my family and hysterically announced, "Everyone on the internet hates me!" Zac's response, "Congratulations! You made it!"

I haven't had that many people question my salvation since attending a Baptist church through my teen years. This didn't feel like success to me. My daughter-in-law Barbara gave me a compassionate hug and said, "They just don't know you." My daughter Aubrey immediately went to war defending my honor in the comments section...which I heard about through the grapevine because I haven't read a comment since someone credited a woman like me as being why she's an atheist. Owie. My son-in-law Nick informed me that "There's no such thing as bad publicity." I said, "Jesus might disagree." And then Ron said, "Jesus can defend Himself. Trust me, He's not dependent on you." Well, that's a relief.

And those were just my family members. I received countless texts from all kinds of friends. The outpouring of support was overwhelming.

That night in bed I was talking it through with Ron and wondered if I no longer read comments under my posts, how will I know if people like me or not? And then I heard a word from God inside my head as clearly as if He'd said it out loud. "Are you writing for them or me?" Whoa. Back the pity party up. Is my identity still with God where it belongs or was I placing my worth in the fickle opinions of people again?

And just like that things became crystal clear and another chain of bondage was broken. Since starting my blog here, each time I'd post, my fear would be what if people don't like it? And each time I'd feel God's gentle voice say, 'What if someday I ask you to write something some people will hate?"

I'm not referring to my church post here. I'm neither crediting nor blaming God for that one. I have no idea if He got a chuckle over that list or if He rolled His eyes, smacked his forehead and called an emergency meeting of my guardian angels.

But these things I know for sure:
1. He created me to be exactly who I am and I'm a work in progress. I'll probably disappoint you, but I'm never a disappointment to Him.
2. He gave me the gift to write and the desire to make people laugh. Sometimes it backfires and I piss people off. If that's you, please refer back to #1.
3. I have a testimony. It's not a funny one. Someday, He might ask me to write it. And I'll obey.
4. Aaaaaaaaand, if you're going to a site called HaHas for HooHas for spiritual guidance, you might wanna reevaluate your life, but whatever.

At the beginning of June, I was offered the job and happily accepted. I have yet to read another comment under any of my posts. I certainly hope people enjoy what I write, but it goes back to that saying, 'It's none of my business what people think of me'. God opened this door of opportunity and kept a firm hand on my back as He navigated me through the fear of change He knows I hate, while teaching me priceless lessons along the way. That's so Him. I'm humbly dependent on Him now more than ever as I adjust to a world of weekly deadlines and daily tapping into a source of inspiration that often feels dried up. He has yet to fail me. I wish I could say the same for me, but now I'll refer back to #1.

I've also been reminded how much I have to be grateful for. Turns out, I have way more than 2 people in my inner circle of supportive friends and I have family members who rally tight when one is under attack. I mean seriously, how many husbands out there would sit and quietly read every single despicable thing said about his wife for that rare moment when he can excitedly say, "Hey babe! Here's someone who doesn't hate you!"

I'm going to leave you with a quote from Joyce Meyer that I jotted down the week before I heard from HooHas. I discovered it in my phone again the day after the church post heard round the world hit the fan. Maybe there's someone who needs to read this right now. Maybe that someone is you.


"Maybe you need to let go of self hatred and self rejection and being self critical all the time. Maybe you need to realize today that God created you with his own hand in your mother's womb. He gave you your personality. He gave you your talents and your weaknesses. God wants you to be who YOU are and you cannot go to the next level that God has for you until you decide that you're going to be YOURSELF."
~Joyce Meyer~
So what's holding you back?
I dare say it's you.
﻿ 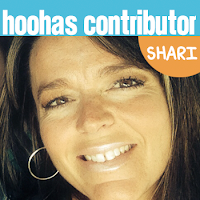