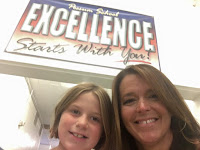 Last year, I took Caymen on a little day trip down my memory lane, that included drive-by's of the house I grew up in, my elementary school, high school, first church, and first job. For some reason, that made an enormous impression on her.

So I decided it'd be fun to take it to the next level. I reached out to a dear friend, Miss Terry, and she hooked me up with the phone number to the elementary school principal, who was kind enough to allow me to take Caymen on an unsupervised tour last week. 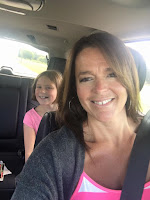 We loaded up that morning and headed out on our most epic memory adventure yet. 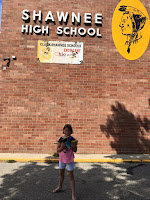 We began our day at the high school (home of the Braves, yo) to say hello to Miss Terry. Just so we're clear, I'm not one of those people who mourns her high school days. Besides cheerleading, I didn't have a big identity in high school. I wasn't popular, but I wasn't unpopular...or maybe that's just something unpopular people say. My goal was simply to get out of high school, fall in love, get married, have babies, and live happily ever after. Mission accomplished. The fact that I still put on my old cheerleading uniform and force my daughters to pose for annual mother/daughter cheer pics is irrelevant. 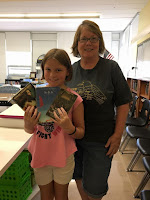 We met up with Miss Terry, who proceeded to spoil Caymen with cookies and books in the exact room where I flunked pre-algebra. Whatever. Glad somebody could have some happy memories in that room.

Then it was off to my elementary school. The good old Possum Eagles. (Who came up with that?) Despite my hatred of school that I still can't explain, I feel a bond with that building. the teachers I had (mostly good), and the many friendships that were formed there. When you spend Kindergarten through 8th grade with basically the same people, you will form lifelong bonds with them. I mean, this is when the memories you can actually remember start, right? That's kind of a big deal. 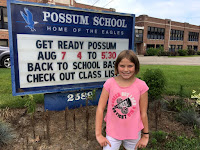 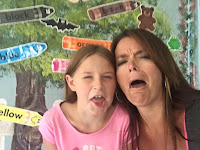 It only made sense to start at the beginning. The Kindergarten room, which oddly enough smells exactly the same, but at the age of 45, I immediately pinpointed the underlying source: urine. Something Caymen and I have in common was that we both cried every day in Kindergarten. Every.Day. The difference is, my poor sweet Mrs. Haycox had to deal with it, whereas Caymen's wonderful Mrs. Easton got a reprieve when the principal stepped in and allowed us to slowly wean Caymen in at her own pace, sometimes one hour a day...and her room didn't smell like pee, so there's that. So Caymen and I thought it'd be appropriate to go into the Kindergarten room and put on our sob faces for old times sake.

She asked if we could go into the teacher's lounge beside the Kindergarten room. Dude. No. We'd be soooo busted.

We proceeded through the old elementary annex, where the smell shifted from urine to asbestos and lead paint. That's where Mrs. Haycox was promoted my first grade year...if you call getting stuck with me in her class a second year in a row a promotion.

My 2nd grade year, I had Mrs. Wright. She'd sneak me sunflower seeds as a snack. Can you even imagine that happening today? She could've killed me the one year I finally stopped crying. But I also can't imagine kids today reading a poem in their phonics book called 'I'm being eaten by a boa constrictor' either, yet there we were. Any 45 year olds with an irrational fear of being swallowed whole by a snake? Anyone? *raises hand* 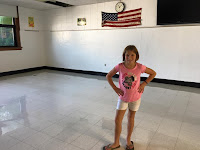 On our way to my 3rd grade classroom with Mrs. Joseph, we stopped by the cafeteria and checked out the wall where they'd hang a big screen and show us the movie 'Where The Red Fern Grows' on the last day of school every year. They either secretly thrived on my tears or wanted to ruin everybody's summer, but no amount of giant rectangle pizzas, greasy round fiestadas, or huge sugary peanut butter balls will ever outweigh the memories of the tragic dog death movie in that room, albeit close.

From there, we graduated to the upstairs corner 4th grade room of Mrs. Dunmire, where every Monday, we were required to make a flower to hang on the bulletin board as a form of discipline that week. If you screwed up, you had to tear a pedal off, and then you personally destroyed your own work of art with each offense. Sure, I could've chosen to behave in such a way as to keep my flower whole each week, but I choose not to live in the world of regret.

Across the hall, 5th grade became middle school and we began changing classes between Mrs. Short, Mrs. Wells, and Mrs. Rollins...the super scary social studies teacher who'd lean over me and her round gold locket necklace would dangle in front of my face in what I can only assume was an attempt to either hypnotize me, make me cry, pee myself, or at the very least, wish I was back across the hall tearing pedals off. If so, she won. All of the above.

6th grade consisted of Mrs. Short, Mr. Short, and Mrs. Spriggs, who was almost tolerable unless she wore her outfit covered in giant vines of purple grapes. That outfit seemed to bring out the worst in her...or maybe it was me...but tempers ran high in Room 33. 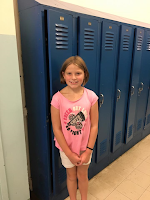 In the 7th grade, we graduated to blue lockers. Speaking of big deals. That's also the year I first began cheering...for Possum Middle School...abbreviated in cheers to "PMS"...and at the tender ages of 12-14 was forced to chant "P-M-S...forever, the best!" in front of crowds of people. Yeah, that didn't scar me at all. 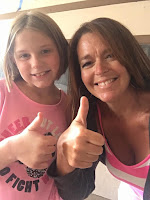 It was also in the 7th grade that I was introduced to 3 life-altering concepts.

The first was journaling. I will never forget Miss Carleson-turned Mrs. Sewell, standing at the chalkboard writing a sentence that we used the first 5 minutes of class journaling about. It was the first time in my life that I was encouraged to tap into random thoughts and as it turns out, I have an over-abundance of random thoughts. And as it also turns out, you can make a little living writing random thoughts. Who knew? 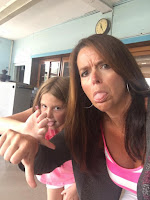 The 2nd came from across the hall where Mrs. Brown introduced me to the horrid concept of Science Fairs and the 3rd happened upstairs when Mr. Stultz proceeded to ruin everything I knew to be normal in my world when he mixed letters and numbers called algebra in what proved to be a disastrous combination for me. Thirty-three years later, my feelings haven't changed. And I counted on my fingers to know it was 33 years ago, so ha. 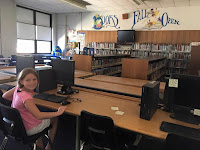 Those same concepts were carried over into the 8th grade, with the same results. Writing, yes. Science, no. Math, oh hell no. Then throw in the time I got in trouble for sharing my opinion in history class that I wasn't going on the DC field trip because I thought it'd be boring. Can we discuss how I've still never gone to DC because I still think it'd be boring? What? No one thinks that but me? Ok, cool. (Baby Boomers, zip it. You're no longer entitled to scold me for my opinions.) 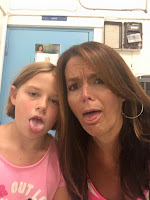 While we were upstairs, our tour wouldn't have been complete without a stop by my 2 most frequented places through all of my years there. The library. And the nurse's station. Put me where the books are and I'll happily lose myself in a world of fiction. Force me into a row and lay a test on my desk, and I'd most likely land on a cot with a stomach ache until she called my mom to pick me up.

Yet another bond Caymen and I share. She said, "That's no fair. Our nurse never lets me go home. She takes my temperature and then calls you to tell you I'm not sick." I explained, "That's because you show up in her office at the exact time you know my Zumba class is ending in hopes that I'll pick you up on my way home. She's onto you." *rolls eyes*...amateur. 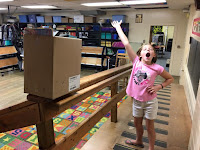 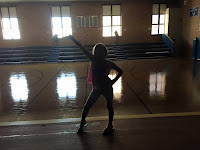 No elementary tour would be complete without mentioning the extras. Gym where we'd bowl, race on scooters, jump on a trampoline, and try to kill each other with a dodge ball. There were no written reports in our day. It was gym, for crying out loud. On the same note, in music class, we'd sing songs. That's it. We'd sing and it was fun. And then there was Art class...where Mrs. Conover would yell and literally throw away your stuff if it wasn't done "right." We need not wonder why I'm not crafty. 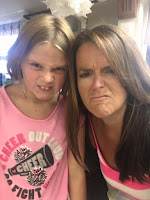 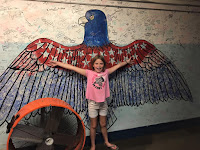 I had so much fun telling Caymen my stories, watching her laugh, and seeing my childhood through her eyes.

When we arrived back to our neck of the woods, we went to our little ice cream shop, and then we had a picnic in the grass in front of her school. This is a place where lots of her memories are being made. Many of her opinions are being formed, concepts introduced, and talents can either be honed or discouraged. This is her now. Not so very different from my then.

Who knows, maybe someday, she'll return here to walk her kids through these halls to share her memories...or better yet, maybe she'll be enrolling them here to create their own. 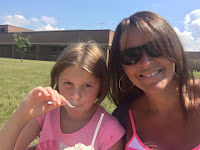 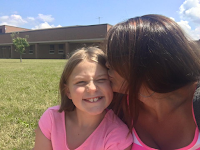 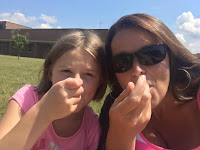