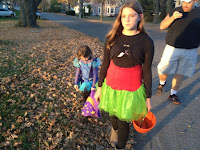 My husband's Halloween shenanigans began 6 days ago when he called me from work and excitedly told me that our city's Trick-or-Treat was scheduled for that night.  Kearstin was concerned she might be too old this year.  She's 13 and reaching that age where she's easily embarrassed...a very traumatic age to be in our family.  Not one to miss the chance of an extra bag of candy around the house, Ron encouraged (read: bullied) her into a Looney Toons Martian costume, complete with a broom studded head band.  When we parked our car, the girls noted the lack of fellow Trick-or-Treaters.  Ron was undeterred.  We'd persevered through 3 empty streets when we passed a group of kids dressed completely normal and staring at us.  That's when Kearstin ripped off her broomed headband and demanded answers.  We approached 2 houses, but either no one was home or they weren't falling for what appeared to be a lame attempt at more free candy.  Finally we came to a house where some nice people took pity on us and informed us that we were a week early.  Ron began Googling the information on his phone (let it go, dude) while Kearstin stormed off humiliated and Caymen trudged along dragging her over sized witch hat behind her. Quite the pathetic sight.

I thanked the nice woman for helping us and she responded, "This will be something for your blog."

Oh.Crap.  Someone I don't recognize, recognizes me...and for my blog.  That can't be good.

To make up for his mistake, Ron took us to an amusement park the following Saturday.  That went well with exception of 1 or 2 incidents.  Okay, 2...

1. When Cayme wasn't quite tall enough for a ride in the children's section, Ron, who was already sitting on the ride, began pumping both his fists in the air and chanting "LET. HER. RIDE" and about a hundred people followed his lead that ended with a near riot in the Avatar line.  (Almost as embarrassing as the time we didn't realize Caymen wasn't wearing underwear until she was 5 feet up in the air on the Charlie Brown flying swings.)

2. While riding on opposite ends of the Swinging Ship, Ron started making the "I'm-Watching-You" hand gesture to Kearstin.  Harmless, right?  Until I realized the young boy sitting next to Kearstin thought it was intended for him and he bolted from the ride crying when it was over.  Ron thought chasing him down to explain was a good idea. It wasn't.

I'm pretty sure after Saturday, there's a police sketch (or 2) of Ron circulating through Kings Island.

That brings us to tonight.  Trick-or-Treat Take 2.  He's got the kids traipsing around the neighborhood again.  This time, Kearstin''s face is completely covered with a skeleton mask and Ron has been given strict ground rules:  Under no circumstance is he to make hand gestures, chant anything, chase anyone, mention my blog, or supply me with anymore entries for said blog.

In the meantime, I opted to hide...I mean, stay at home. Blogging.