That Which Does Not Kill Us Makes Us Mudders 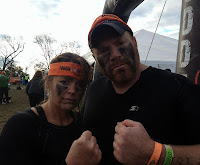 As you may already know, I'm the type of person that copes with fear of the unknown by imagining the worst case scenario so that I'm pleasantly surprised at how wrong I was.

Unfortunately, in this case, even my worst nightmares undershot reality.  A lot.

Imagine a place where I willingly wear 88% Spandex from top to bottom out in public and then reach a point of exhaustion where I stop sucking in my gut.  Now imagine a wedgie so deep from being violated by rocks that it can't be seen with the naked eye, fingers dripping with so much mud that they slip off the spandex material every time you try to reach it and in a moment of desperation, you dry your fingers on your own hair and almost cry with relief when you're rewarded with the loud 'POP' of released suction and your spandexed wedgie breaks free.  And imagine forming such a bond with your team that one will offer up the only dry spot on the back of her shoulder for another to wipe her snot dripping nose and there's no judgement when one is peeing freely as she runs because there are no other options and a Kegal would require the use of more muscles and it's not worth it.

And now imagine me saying things like "Ooo Rah" just to motivate myself to crawl through the cold water while live electrical wires dangle above my head, periodically zapping my various body parts and leaving me with a jolt felt all the way through my chest that made me wish I'd see a light to walk toward.

Welcome to Tough Mudder Kentucky where the phrase "Kentucky Hills" will forever provoke a cold chill down my spine.

We were the final group of the day which means those straight up and down hills were a solid sheet of slippery mud and crawling and crab walking became regular movements simply to protect ourselves from breaking bones, which happened to someone right beside us a mere 2 miles into our 12 mile journey.  This was no joke.  People were getting hurt and others were quitting left and right. 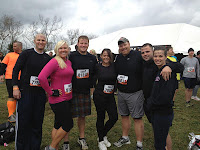 The first half was kind of fun.  It was hard, but it was new and exciting.  I still laugh at everyone running around a large mud puddle at the beginning only to be crawling on our stomachs through mud under barbed wire 5 minutes later.  Immediately after that, we were faced with the ice tank where you had no choice but to go under a barbed wire center to reach the other side.  That was the first time that day I heard myself say, "I can't" and it was met with my husband's firm reply, "You will" and as my breath literally left my body from the cold, I ducked into the icy water and felt his massive hands pull me up on the other side where the other men on our team waited and dragged me out of the tank.  Lesson of the day learned early:  This isn't "I" this is "We."

The second half became mental.  How bad do you want it?  I wanted it bad.  And so did the rest of my team that included my husband, whose foot had a landscaping spike through it just one week ago to the day, a woman who'd not only given birth, but had a c-section just 8 weeks previously and men who could have easily run on ahead but who never left their teammates behind.

Every one of us finished and we did it together.  Our team was amazing.

The temperature that started in the low 50's steadily dropped as the day wore on, but by the end of our 5 hour trek, filthy, hurting, shivering and soaking wet through the muddy hills of Kentucky, we didn't bat an eye at having to run through more live electrical wires to cross the finish line where we were crowned with our priceless orange head bands, rewarded with our hard earned finisher t-shirts and handed a beer that inspired this picture: 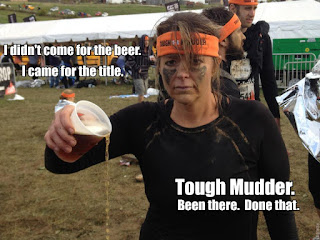 My bruises will heal, the pain in my body is temporary and I will one day regain the full use of my left shoulder.  However, the experience was life altering and the memories will last forever.

As an added bonus, the physical, mental and emotional trauma altered my menstrual cycle by one week.  Thank you Tough Mudder for doing what my doctor refused and saving me the trouble of googling a home remedy.