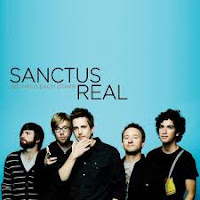 Okay, maybe this Christian band isn't solely responsible for our disastrous weekend.....let's just blame their song, "Lead Me." For those who are unfamiliar with this song, you might want to check it out on You Tube. (Or if you don't want a fight with your hubby, don't.)

Here's the chorus to give you the gist of what I'm talking about. It's a wife's pleading words to her husband:

“Lead me with strong hands
Stand up when I can't
Don't leave me hungry for love
Chasing dreams, what about us?
Show me you're willing to fight
That I'm still the love of your life
I know we call this our home
But I still feel alone”
I don't care how strong your marriage is, I don't know of any wife who hasn't secretly glared at her husband or a husband who hasn't cringed when this song comes on the radio. Don't get me wrong, it's a beautiful song with an amazing message. But let's be honest here, Sanctus Real set us all up for failure with this little gem.

It started a couple weeks ago when this song came on the radio in the van. My husband, who is notorious for not listening to words but simply the melody, commented how he likes the song. I asked him if he'd ever listened to the words. And his response was, "Yes and I assume this is how you feel, right?" (Rrrrr.....) And a seed of resentment was planted.

Fast forward to Friday night when things started to rise to a boil. Without going into too much detail, (mainly because it doesn't exactly paint a flattering image of me, but whatever) an argument took place in front of 2 of our children. As is usually the case, this argument that had been building inside me for weeks never did address the real issue. Instead we argued about the pros and cons of bumping vs. setting during co-ed volleyball. Wow. Talk about being derailed.

Now there's a welcoming invitation for him to step up and take control. Yikes. I scared the crap out of him and he left for work with a deer-in-the-head-lights look on his face and practically squealed out of the driveway.

I was left in the quiet of the house to receive the God-scolding I totally deserved. How is my husband supposed to lead someone like me? My family's motto was "You can't tell ME what to do!" Yeah, that's real approachable.

The conclusion God brought me to is that I can't change anyone else and it's not my job to try. The only thing within my control is to allow God to change me. Maybe if everyone approached life with that motto, we'd have less judging & feuding and more acceptance and loving? Just a thought.

Regardless, I was left with a husband with hurt feelings, at my own hand. (Or should I say mouth.) And I can't live with that. So I got in the car, drove to his work and left him a note on the front seat of his car, apologizing profusely and promising him cheesecake (and other stuff I'll omit from this blog) when he gets home.

I'm relieved to report that everything is fine now. We haven't discussed the issue anymore. We've silently moved on. Lesson learned. (And May Sanctus Real be a little more careful when writing beautiful heart-felt marriage songs in the future.) I've gone back to focusing on my issues and he's gone back to not listening to the words of songs. That seems to work out best for everyone.

One thing that still bothers me a tiny bit, though. He never has mentioned that note I left in his car. And there were several cars exactly like his in the half-full parking lot. Which leads me to wonder who exactly received my written promises of cheesecake.....and the other stuff? Uh oh.