The only resolution I felt God telling me last January was to 'Be still.'  I didn't understand why or know what it meant.  Looking back, I see it as the warning I didn't heed.

If my life were a snow globe, 2014 was the year somebody picked it up and shook the crap out of it, or as I call it, 'The year my children tried to kill me.'

I survived, albeit with 8 extra pounds, 12 new wrinkles and countless stray grays popping out of the top of my head every time I look in the mirror, but I survived.

Event after event after event and in between events was all the prep work for the next event.  Bridal showers, graduations, marriages, baby showers, holidays, birthdays, receptions, parties, work,...life...and the panic within of what mine would look like when the snow in my globe finally settled to the bottom.

My remembrance of 2014 is as the year of change.  On every level.  Change.

Half of my children moved out of our home.  We're a family of 4.  They each married their best friend.  We're a family of 8.  I left my job at the salon, cut my massage hours down to one day a week in my home office and in a leap of faith, jumped into the world of Freelance Writing.  I still don't know what that even means, but I know that God told me to do it.  Other aspects of my life that I won't share were suddenly altered.  Things around me that I never thought would change.  Boom.  Changed.

Basically, most of 2014 spun wildly out of my control and let's just keep it real here.  Although a lot of it was good, I spent most of it in fear.

Then, on November 12th, something amazing happened.  My son and his wife welcomed a son who will call me 'Sassy.'  And with that, we're a family of 9.  Different.  Natural.  A new normal.

There are two images in my mind of this past year that I want to carry into the next.  The first is an anchor.  On the surface, I might feel like a ship rocking wildly out of control as life's storms rage and the waves of circumstance crash against me.  But as long as I'm tethered to the One who is holding me firmly in place, I'm safe.
'We have this hope as an anchor for the soul, firm and secure'.  ~Hebrews 6:19~

The second is a seed.  What good does it do to keep it held tightly in our hand where we think it's safe under our control when we're actually preventing it from becoming what it's ultimately meant to be?  The harvest of the seed comes after it's break through the shell.  We have to let go.

Growth through pain.
Beauty from change.

As I sit in my office recliner with my laptop on my leg and my grandson in my arms, the crashing waves have settled to a relaxing ripple that soothingly sway me in the calm after the storm and I look ahead to the new year of unknown.

My resolution for 2015 is to practice really trusting God.  Sounds simple, but I'll have to constantly remind myself that nothing is going to rock my world that He doesn't already know about, hasn't prepared me for, or won't bring beauty from in the end.

Therefore, I'll allow Him to unclench my fingers and spend this year with open hands, sewing seeds into the roles that He's entrusted to me; wife, mother, sassy, writer, massage therapist and yes, zumba instructor because as Ecclesiastes reminds us, there is most certainly a time to dance. 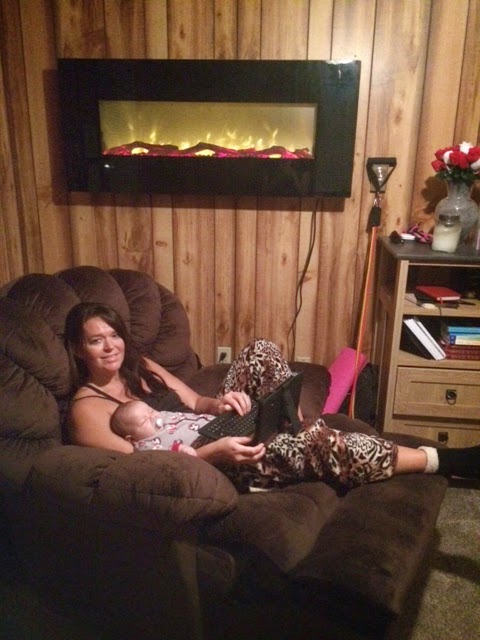 Aaaaaand I'm gonna lose the 8 lbs, find a super powerful face cream, diligently visit my hair stylist...and most of all, the next time I feel God telling me to Be Still, I'm gonna freakin crawl into bed and sleep till it passes.