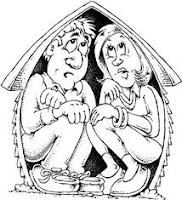 Our family has been together for 13 days in a row.  When I say 'together' I mean really really together.  It started with a van ride to Baltimore, followed by 8 days on a cruise ship, back in the van for the drive home, topped off with Christmas and now we're being hit with a blizzard...8 inches of snow and counting.

Now factor in our Christmas gifts that include a remote control helicopter that doubles as a video camera, a pogo stick, nail gun, juggling torches, unicycle, and a mini Dune Buggy that tops off at 5 mph, which doesn't sound fast until you're being chased through the kitchen and down the hallway.

In the hands of a family who studies Duck Dynasty, that is a recipe for disaster.

If we were to visit 'Christmas Past' I'd be reminded of the year my husband received an air soft pellet gun and accidentally shot my cousin's wife in the leg as they were leaving our home which escalated to him running around the driveway wearing pool goggles, Z's athletic cup, and covering his nipples with his hands while our son shot at him.  I put my foot down when I heard him say, "Ok, your turn."

So far, so good.  The ping pong table is being assembled, the level of inappropriate humor is on the rise and the house has taken on a frat house vibe, but the 6 of us are miraculously unscathed.  So far, there have been no major fights, serious injuries or permanent damage to property.  I credit this to God's grace in spite of the complete lack of adult supervision.

As for the side effects we've had on others over the course of the past 2 weeks, I can't say for sure.  We can't control everything.

From the looks of it, we're not even close to this being over.  So we'll leave this post 'To Be Continued...'  Because let's be honest.  Things can only go downhill from here.
Posted by ~Sassy~ at 10:17 AM