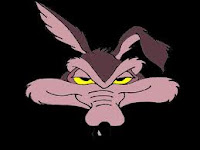 We're well accustomed to one of the downsides of country living. Raccoons, possum, snakes, mice, swooping bats and the far away cries of coyote at night. (Emphasis on far away and at night.)

We've never given a second thought to allowing our two dogs to enjoy their daily hikes through the fields that surround our house. It's great exercise and it keeps them off the road.

But today, the coyote upped the ante when a pack came after our dogs in the middle of the day in broad daylight. By the time I got to our back door, our dogs were running home and the pack of coyote were heading toward the woods in the opposite direction. Crisis averted.

An hour later we let them out again and planned on keeping a close eye. In seconds, they bolted for the back field and completely ignored our calls. They were clearly on a mission and nothing was going to stop them. My husband, wearing only his boxers, baseball cap and tennis shoes, went for the shotgun while K and I continued to scream for the dogs. Well, I was screaming for the dogs. K was just screaming. When I saw what she was looking at, I began screaming too. As our dogs ran full speed toward the woods, the pack of coyote ran full speed toward our dogs.

Out of the corner of my eye, I saw my underwear clad hubby run out onto the deck, lose his footing in the snow, and slide into the railing, which barely kept him from plummeting off our 2nd story deck with the loaded shotgun. (Yeah, that's what we need.)

When I looked back toward the field again, I noticed the dogs had reconsidered their plan of attack and decided instead to retreat back to the house as my husband took aim and fired round after round toward the pack as they quickly changed direction and went back toward the safety of the woods again.

Clearly, this is a game changer. Allowing the kids to play outside alone is off-limits. The dogs are no longer permitted outside at the same time, and the one dog outside at any given moment is now guarded by my husband or myself with the shotgun. And my husband should maybe consider shoveling the deck and wearing something other than his underwear in case of an emergency. Just a thought.

PS. If you're planning to visit, call first. You should now consider us armed and dangerous....whereas before, we were just dangerous.
Posted by ~Sassy~ at 1:21 PM