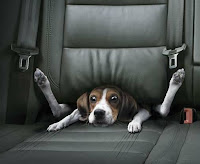 I should preface this story with the fact that my husband has always hated Family Photo Day. It's not that I loved it or anything, but it was important to me. Family photos are extremely important to me. I love looking at them and I love taking them. We used to have them professionally taken, made into Christmas cards and sent out religiously the day after Thanksgiving. Notice the past tense? Let me tell you what happened in 2002…

Zac was eight, Aubrey was six, and Kearstin was three. Such cute ages for Family Photo Day! We also had two adorable dogs named Bo and Sadie. What could be more precious than two dogs in our Christmas picture? I scheduled a special pet-friendly photo session at a studio just fifteen minutes from the little house we were living in at the time. What could go wrong? Well, where do I begin? Right off the bat some mistakes were made by both my husband and me that played a huge part in the debacle that followed. First, we had chili the night before and I made the unfortunate decision to give the leftovers to the dogs. Secondly, he fed the kids chocolate donuts right before we left. Bear with me. This will all make sense in just a second.

We all got dressed up and everyone looked really nice. Anyone who knows us knows that this is rare. We don't get 'dressed up' and although I hope we look 'nice' when we go out on a regular basis, that's not the main objective. Our main goal is for everyone to be clothed. (A lesson learned that very same year when somehow all five us managed to get from our house to our van and then to a softball game without one person realizing that Kearstin had no clothes on from the waist down.) But I digress....

On this particular day, our neighbors got the rare treat of seeing us all fully clothed as we loaded into the van. But it didn't take long for things to take a downhill turn. We had barely gotten onto the highway when we noticed the effects the leftover chili was having on our dogs. It was almost slow motion as the smell permeated it's way to each of our noses and everyone's eyes opened to their fullest capacity. I jerked my head around to check Kearstin who has the most sensitive gag reflex of all of us. There she was, sitting in her car seat, violently dry heaving. Before the 'dry heaves' could become 'wet heaves' I started promising her things if she didn't throw up. “If you don't throw up, I'll give you balloons and candy when we get to the mall!” (If you approach parenting with the knowledge and acceptance that your kids are all going to end up in therapy anyway, I've learned it gives you a lot more freedom in the things you're willing to say in any given circumstance.)

My promise of balloons and candy seemed to do the trick....until the next round of silent gas escaped from the dogs. Without drawing attention to it, my husband tried to subtly deal with the situation by activating all of the automatic windows. Suddenly wind was whipping through the van. (And our hair, but that's neither here nor there.) Problem with that idea, besides the Photo Day hair, was that it managed to spread the smell faster and this time no balloon in the world was able to stop Kearstin's chocolate donuts from appearing down the front of her beautiful dress.

I suppose now is a good time to tell you that Aubrey has the second most sensitive gag reflex and I have the third. So not only did we have the dogs continuing their gassy antics that started this thing in the first place, but it turned into 'Puke-Fest 2002' as our mini van (slash wind tunnel) flew down the highway with my husband yelling, “EVERYONE STOP VOMITING RIGHT NOW!” at the top of his lungs. (For future reference, yelling orders has no effect on getting anyone to stop vomiting.) Zac, who inherited his dad's zero-gag-reflex, was in the back taking Kearstin's dress off of her in hopes that it might help her stop vomiting. A nice attempt, but that didn't work either.

Realizing he only had one option, my husband did a U-Turn and we arrived back in our driveway a mere fifteen minutes after we left. Unfortunately, those same neighbors who experienced the rare treat of seeing the fully clothed and looking nice family load up in their van earlier, were still outside to witness us squeal into our driveway as two smelly dogs and four wind blown, chocolate covered people poured out of every available door, followed by a naked Kearstin who was happily skipping into the house asking if we were still going to get her a balloon and candy.

I wouldn't expect a Christmas photo from us anytime in the near future if I were you.
Posted by ~Sassy~ at 4:30 AM