Wanna save yourself hundreds of dollars in therapy? I'll let you in on my new little secret.
A leaf. And a river.

Feel better yet?
Stick with me.

Keep in mind, this coping mechanism was given to me to address one of my specific issues, so this might not even apply to you.

BUT, if you suffer from random irrational thoughts that fly into your head and then swirl there like an endlessly flushing toilet 24/7, then this is your jam.

No? You don't?
Well. Aren't you a lucky s.o.b. And the thought that I'm the only one won't wake me up tonight at all, except that it will, so you may as well stop reading now, because you obviously don't possess this gift of neuroses. It requires professional help to survive it, but that doesn't make it any less of a gift, k?

Movin' on to all you super cool obsessively neurotic people like me.
I know you exist and I'm not just saying that.

There's no way to pinpoint what triggers my thoughts.
Yet. We're hoping for a cure. Maybe I'll sponsor a 5k. I'll design these shirts.

It'll be wildly successful. Unless nobody comes. Or buys a shirt. How humiliating. And what am I supposed to do with all these shirts? I'm so embarrassed and owe everyone an apology for even suggesting such a stupid event. Pelt me with rocks and garbage, I deserve it. Fine, I'll wake up at 3am and do it myself.

Aaaaand there's just a tiny example of a 30 second trip around my toilet bowl of thoughts. It could be about anything; Things I did. Things I didn't do. People who don't like me. People who do. Or do they? Maybe they're just pretending. Or they just haven't met the real me yet. What is the real me? Who am I?

*flush* And around we go.
You get the idea.

You should see my therapy sessions. I only make a fool of myself for like 90% of it. It isn't any wonder she won't give me her personal number or accept my facebook friend request, which I feel is counterproductive to treating my rejection issues, but hey, she's the professional. That aside, there's no denying she and I have bonded. One day she said she could never beat a groundhog to death even if it did eat her geraniums, and I said I couldn't either, and she said, "That's because you're not a sociopath" which might be the nicest thing anyone's ever said to me.

You heard it here first, folks. I'm not a sociopath. Check.
It's one breakthrough after another, I tell ya.

My husband calls me Bob Wiley, from the movie 'What About Bob.'
For the record, I'm nothing like him, except if my therapist ever goes on vacation, I'm willing to temporarily relocate. Sure I might occasionally gag into a paper bag on public transport and randomly shout obscenities, but I don't wear a goldfish in a jar around my neck so that completely disqualifies me from the nickname.

I had a goldfish as a kid. My mom put his bowl out on the back porch on a winter day while she cleaned. She forgot about him. He froze. So she moved his bowl to the top of the kerosene heater to thaw him out before I got home from school. She forgot about him again. I walked in to find 'Wade' at a full boil. There's no bouncing back from that. That'll probably come up in therapy. Or at least it should.

Anyhoo. I bet you're waiting to hear how a leaf and a river will help all you thousands of neurotic people just like me. We're like the majority. We should form a club. I'll come up with a name. I'm sure you'll understand why shirts are out of the question after what happened with the failed 5k that never actually existed.

Where were we?
The leaf and the river.

It's simple. Here it is.
WhenEVER a thought enters my mind, if it doesn't need addressed in that very moment, (ie; a frozen goldfish and/or a fictional 5k)...I imagine myself putting that thought on a leaf, sending it down a river, and letting it go before I allow it to drag me down the toilet bowl of neuroses. My therapy homework is to give myself a mental break. Or as Ron keeps saying, she wrote me a prescription to... 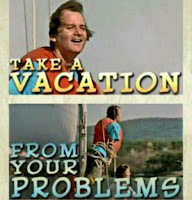 What, without a leaf and a river? Stop with your lunacy.

Call me crazy, but the leaf and river really work.
Except I'd rather you not call me crazy.

It doesn't have to be a leaf and a river. Some people visualize putting their thoughts on a hot potato or in the little tubie thing at the bank drive through. Those would work, too...if you don't mind burning the palms of your imaginary hands or you have a complete disregard for the make-believe person working the non-existent bank window.
But you do you.

So because I tell Ron everything and because he's the person I drag along on my emotional swims, I told him about the leaf and the river for the sole purpose of reminding me if I get caught in a swirl of toilet water and forget.

He suggested I send my concerns about my weight...and his...down the river. Seriously dude? What's next, sex on a leaf? Is that where we're headed???

He basically proved an inclination to abuse my leaves for his own selfish purposes. And if that weren't enough, he wondered if my river might eventually form a cesspool and backwash all the leaves into my brain at once.

Let me stop you right there.

You jumped to my weight, and YOURS, and then suggested my brain river might actually turn against me and assault me with my own leaves.

And I'm the one in therapy.
Who needs pelted with rocks and garbage now, huh?

It's only a matter of time before my therapist requests Ron's presence in one of our sessions. I would totally suggest it myself, except the last thing I need is for him to plant the idea of Death Therapy in the mind of my new super good therapist friend.

Of course she'd never entertain the thought of that, seeing as she's not a sociopath and neither am I, so I'd never even qualify for such an extreme therapeutic treatment anyway. Plus I've got my leaves and my river, so that proves sanity. Also please don't strap dynamite to my chest and leave me in the woods. It wouldn't be the dynamite that bothers me so much as the seeing someone walk away from me in the woods. Ron might consider it though. Maybe not the dynamite thing, but the leave me in the woods thing, if he thought it would jolt the Bob out of me. It's not far fetched considering he once left me in a sensory deprivation tank for my birthday...*flush*

Ok, I'm not great at the leaf thing yet, and this might be an ongoing process, but I'm sending that Bob Wiley nickname crap straight down the river.