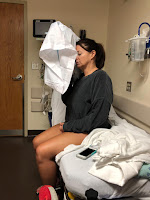 My back hurts. This is nothing new. My back always hurts.
I have 2 chiropractors. One can snap my lower back like a champ, the other is a genius at relocating my ribs. One has daytime hours, the other has evening hours. If they could work at the same place, it'd be a dream realized for all of us, but they don't share my vision. Yet. But for now, the system works. Unless something goes terribly wrong in the middle of the night and I'm left to my own devices. That's when things can take a turn for the worse. And they almost always do.

Which brings us to last Wednesday. I left Zumba feeling a few spasms in the right side of my lower back. Nothing an Icy Hot Medicated Patch won't take care of. (I get absolutely nothing for endorsing them, even though I should.) Before bed, Ron patched me up and rubbed me down with muscle rub cream. Then he put his arm under my pillow to kiss me goodnight, lifted my head about an inch up, and I felt the familiar pop. There goes my rib. And the ability to inhale right along with it.

With no chiropractors to call, we took matters into our own hands.
Will we ever learn not to do that?
No. We will not.

Our attempts at relocating my rib include, but are not limited to, Ron putting me in a bear hug, lifting me off my feet, and shaking me up and down. Me laying on my massage table while he presses on my back with his forearms and/or tennis balls. YouTube videos, because YouTube is like Amazon. It has everything. Maybe it shouldn't.

Basically, our bedroom turned into the DIY-Chiropractor Edition...similar to my DIY-Ear Nose and Throat Edition and my DIY-Gynecology Edition, except significantly less embarrassing to explain to the doctor when you end up there. And you will end up there.

When he finally resorted to laying all of his dead weight on me because "Your rib will have nowhere to go but back into place" I decided it was time to call in the closest thing I have to a professional at 11pm. My daughter-in-law, who is currently studying to be a PTA. Her first piece of advice, "Don't try to pop it back in." (Maybe we should've called her first.) She told me to lay with my foam roller against my spine and gently roll it back and forth to relax the muscles and then maybe the rib will slide back in on it's own. To her credit, that worked. Unfortunately, the spasms were too far gone for it to make much difference.

Ron wanted to take me to the ER. Hard pass. The last time I let him take me to the ER, I called a teenager names and lost my testimony with pretty much everyone. I was provoked. Not my fault. It rarely is.

Because I also have a history of self-diagnosing myself, I ended up on the couch in the fetal position, WebMD'ing my symptoms. According to my professional medical googling skills, I'd narrowed it down to kidney stones, a UTI, a bladder infection, appendicitis, or cancer, because on WebMD, all roads lead to cancer. And at 2am, you'll leap frog from back spasms to cancer within 5 clicks of a link.

I woke Ron up.
"What if I have appendicitis...or something?"
Ron: "I was thinking it might be a heart attack."
Holy crap. I'm having a heart attack. THIS.IS.NOT.A.DRILL.
Then he told me to wake him up if it gets worse, which I'm pretty sure is not the advice you'd give to someone having a heart attack, so I wandered back to the couch to listen to 'I Can Only Imagine' and cry.

*New Life Rule: Two hypochondriacs are not allowed to talk to each other in the middle of the night.

When Ron woke up at 4am and found me crying in the Rec Room imagining how he'd tell the kids, I caved and let him take me to the ER. On the way out to the van, he said, "This reminds me of when you were in labor with Aubrey."

Sh*t. That's it. I'm pregnant and didn't know it.
Because at 4am with no sleep, that's a genuine possibility.
A reality show called 'I didn't know I was pregnant' would support my diagnosis.

While he parked, I checked myself in, telling the lady I was having back spasms, because there's such a thing as a psych ward, and the ramblings of a mystery baby could very well land you there. Then she wrapped my id bracelet tightly around my wrist, thus triggering my claustrophobia, because I'm weird and prefer not to have my circulation cut off. All I could do was stand at her window staring at that super tight band and uselessly bending my wrist back and forth back and forth back and forth...And that's how Ron found me. He immediately knew what was happening because he's witnessed such a meltdown at the town carnival's ride pass window, and he asked the lady if she could please loosen it. She said no. So he ripped it off my wrist and put it loosely back on with what was left of the shred of sticky end. He doesn't like to be told no.

Back in a room, exhaustion was setting in, but all I could do was sit straight up with a pillow held to my face, because maybe I could trick my body into sleeping vertically. For future reference, my body cannot be tricked into sleeping vertically. Then the nurse came in and explained that they had no record of me ever being in the ER. Not that I blame them for wiping their computer clean of my existence after the outburst of 2017. So I filled her in on my entire surgical history while Ron sat across from me mouthing things and pointing to parts of his own body, as if I'm going to forget to mention my surgical enhancements. Pull yourself together, man. This ain't charades and if I can see you, so can she.

Then the doctor came in, poked my back, said "You're having back spasms" and asked if I wanted shots or pills. It was crazy. He didn't even google anything.

I chose the shots. And the pills.

I'm not sure what's in hospital muscle relaxing shots, but I'd equate them with an elephant tranquilizing dart...not that I know anything about those either. Two shots, straight into my a** cheek. She warned me I'd feel a poke and a burn. She was correct. What she failed to mention was that I'd immediately break into a hot sweat and have to throw up. So I told her. I'm gonna throw up. She walked across the room to get a small pink plastic curved vomit pan, which is clearly made for tiny people who must not projectile like us big folks. Then I asked Ron to hand me my bottle of crystal lite.

The nurse stopped reaching for the little vomit bowl and turned to me and said,
"I thought you were going to throw up."
I am.
"Then why do you want a drink?"
Maybe because I'm 47 years old and know myself well enough that I'd like a drink of something before I throw up, which is going to happen whether you hand me that vomit cup or not, so maybe we could stop the interrogation.

And then I miraculously threw up like a normal person, didn't miss the pan, didn't fill up the pan, and managed not to drop the pan out of my sweaty hands. That's a win all around, people.

So let's celebrate that in silence, shall we? But instead, as she sealed my pan in a trash bag, she said "Is that cherry crystal lite? It smells like cherry."
*Heave* There's that projectile vomit we know and love...and they probably deleted me from their records again.

I returned home and was at the mercy of Ron to meet my basic needs, and what I thought I needed was a bath. (The know-it-all nurse would probably tsk tsk such a terrible life choice.) The problem was, the odds of me successfully climbing into and out of our new ginormous bathtub were slim to none. You could stack bodies in that thing. Trust me, getting stuck in there is not an irrational fear. For once. As Ron carefully navigated me over the ledge, Caymen yelled, "She's in!"

Okay.
1. I didn't realize this was a spectator sport and
2. I don't even wanna know who she was announcing that to.

I laid helpless on my back as the tub filled with water and then he turned on the jets, sending columns of water shooting over my head and face in an obvious attempt to drown me. That's the only plausible explanation.

No more baths. Obvi.
And I'm perfectly willing to slap the smug I told ya so look straight off that nurse's face right now. Don't test me Janice.

With regular doses of prescription meds, ice massages from my daughter-in-law, and a long weekend of rest, I was able to return to the gym on Monday. My back still hurts, but not, let-my-husband-experiment-with-my-skeletal-structure-hurt, so that's an acceptable normal to me. It was a long 4 days, but I just keep reminding myself that it could've been worse.

Like, dead worse. Or, even worse worse, had a baby.
I'll take the spasms, thanks.