Up until last week, the only firsthand knowledge I had of a drone was the one my son-in-law got my husband for Christmas. We took it with us to a cabin this past spring, and within 30 seconds of taking it out of the package and inserting the batteries, he had it stuck high up in a tree over a set of railroad tracks. The next hour was spent kicking and throwing footballs at it until it finally fell to the ground. Miraculously, it survived. And then he crashed it into the side of the cabin. Still kickin'. Ironically, the final nail in the coffin of his drone came when he tried to put it someplace safe. On a top bunk. And then he dropped it. From the top bunk.

So my life was officially drone-free. That is, until recently. Caymen and I were outside. She was swimming and I was watering my flowers in my pajamas. Before you judge me for being outside by the pool in my pajamas, you should know that more often than not, I'm inside the pool, naked. And before you judge me for that, I'd ask you a question. Would you come home from a workout and go inside your house all hot and sweaty or would you do the responsible thing and strip down to nothing and dive into the pool first?
You don't have to answer that. I know.

Thanks to a privacy fence and cornfields, with exception of the farmer who gets a surprise if he shows up on his tractor every now and then, I've basically got nobody to worry about.

I used to have to watch for a man on his flying go-cart, but he crashed into the river a couple of years ago. These are things I couldn't make up if I tried, people.

So back to it. Caymen was swimming. I was watering flowers. She said, "Something weird flew over our pool." Honestly, I didn't care. She's 11. She could be talking about an airplane...a bird...a falling star...who knows, we live out in the middle of nowhere. So I did that mom thing. "Oh really? Huh." Because I don't know about you and your plant watering goals, but the least amount of trips back to the hose to fill up my can is key, so I'm not just gonna look up in the sky willy nilly and spill a bunch of water on the ground...unless someone built another flying go-cart, then of course, let's take a little look see.

But when she said, "Here it comes again" I looked up. And there, smoothly gliding over our backyard was something that was too low to be an airplane, but too high to be a go-cart. It was small with a red light on the side and the first word that came to my mind was DRONE.

I don't even know why drone was my first thought, since this thing was flying smoothly in a straight line and not nosediving toward our trees or recklessly bouncing through the air and careening toward our pool, which was why I never let my husband try to fly his drone above our yard. But a drone was all it could be.

So I did what any calm and rational mother of a young child would do in that situation.
I yelled, "DRONE!" made her get out of the pool, wrapped her in a towel, ducked into the garage, ran into the house, and closed all the curtains. Then I reluctantly texted our neighbor and tried to sound like a normal person, because not texting your neighbor and asking if they've noticed a drone spying on your backyard should be a life goal.

She initially answered no to the drone sighting, because she's normal and I'm crazy. But then later, she texted back and told me that when her boyfriend got home, he took binoculars outside, and he said I'm not crazy. He found the drone!

We should talk about the part where he said I'm not crazy, because that's pretty cool for someone who doesn't hear that very often, AND from the guy I almost called one night because Kearstin and I saw a running car sitting in our driveway, but then she realized she'd accidentally pushed her auto starter and that was her car running in our driveway. But no calls were made, and although guns were drawn, no tires were shot, so we're just gonna leave things with I'm not crazy, k?

Back to the drone.
We discussed the possible options:
Government owned drone doing a drug search?
A pervert?
Or a government pervert?
Yes.

One thing was clear. Whoever was driving that thing wasn't an amateur who'd just pulled it out of the package and popped the batteries in, which begged the questions, how long have they been spying on us and how much of that time was I naked? Questions you've asked yourself a million times, I'm sure.

I called my husband at work and asked him what I should do.
He said, "You could call and report an unidentified flying object."

Then he said, "I think it's illegal to shoot it out of the sky."

Ooookay. Not what I asked, but good to know. Now, what should I do???
Then he said, "Shoot the damn thing out of the sky."

So this is gonna end poorly, is what I'm hearing. 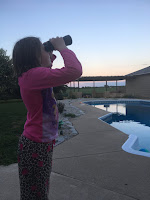 The following evening, Caymen and I went back outside. I was wearing normal clothes, because I know you're wondering. She was the one in pajamas, armed with binoculars and a laser pointer, because who doesn't have a laser pointer laying around their house? And I was prepared with my protection of choice. For the sake of not offending anyone, let's just call it our AR-Plastic Straw.

So this is what our life has become in Farmland, USA.

As we stood watch, our neighbor texted me. Her boyfriend found out that our county was currently using drones for land surveys. (He also suggested I "put my nips away before they end up in the newspaper," but since they've already been featured on my blog, I feel like I beat the paparazzi to the punch.)

Anyhoo. I told Caymen the news.
Stand down. It's just the county doing a survey.
Without taking her eyes away from the binoculars, she asked, "Should we still laser it?"

Let's let em slide...unless my measurements end up posted on a registry somewhere, and then next time, we won't be so generous.


Just for fun, here's a little clip of what we look like trying to get a drone out of a tree with footballs.
Fear not, our aim is much more accurate with straws. *wink*