Thanks, but NO TANKS

If you read my previous entry, you know that my husband bought me a gift certificate for a deep
tissue massage followed by an hour float in a sensory deprivation tank for my birthday.

In case you don't know, any and all crazy ideas around here originate with our son, Zac, and he'd recently gone to that place and loved it. Also, if you don't know, a sensory deprivation tank is a lightless, soundproof tank filled with 10 inches of salt water at exactly skin temperature. It can also be referred to as an Isolation Tank...or Torture Tank, if we're being accurate with the naming. The third piece of key information that you might not know, is that I'm severely claustrophobic.

Legend has it, that one hour sleeping in a sensory deprivation tank is the equivalent to four.
Legend also has it that they used to connect a string inside a coffin to a bell above ground in case they accidentally buried someone alive.
What's the connection? I don't know. I'm rambling. 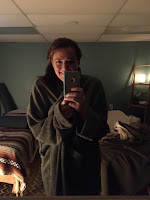 Let's start at the beginning. Ron scheduled my appointment requesting the deepest massage therapist they have. That would be Angela. And Angela didn't disappoint. If during a massage you ever wonder if the table might give way and collapse under the pressure of a massage, you've got a good one. Now stop your crying and let her do her job, dammit.

I lay there enjoying every painful minute, trying not to think about what was coming after the massage. "But when do I get to get closed into a dark silent tank of water?" asked no claustrophobic ever.

After my massage, they gave me the fluffiest most comfortable robe ever, led me and my basket of personal possessions into the tank room, and went over the instructions.

"Shower before and after."

"Avoid causing waves." (Not the first time I've heard that, won't be the last.)

"There's a floaty ring pillow for your head, but you don't need it. There's no way you'll sink." (Not sure if she was referencing the amount of salt in the water or the level of implant in my boobs, but I'm pretty sure they said the same thing about the Titanic, so there's that.)

"Close the tank door or the water will lose it's temperature."

"Try not to get salt water in your eyes."

"If you get salt water in your eyes, it will hurt like a mother." (Okay, I added that one, but is it true?)

"A chime will ring when your session is done. If you don't wake up, we'll knock on the door. If you still don't wake up, we'll come in and bang on the tank." (At that point, they might as well call 911, because if they can't wake me up in a tank full of water, I've obviously drowned.) 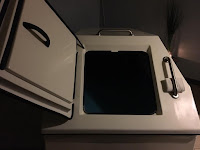 Then she left me alone with the open door of the dark tank waiting to swallow me alive never to be heard from again.
Happy birthday. Love, Ron.

I showered, put in my earplugs, and climbed into the tank. Not sure if that slippery bottom was mine or the tank, but I immediately slid onto my back, causing a giant ripple of waves, sending a splash of salt water straight into my eyes, and bolted upright gagging and grabbing for the towel. Great. I'd already broken 2 rules.
Three minutes down, fifty-seven to go.

I carefully propped the towel in the tank door so that I'd have a sliver of light, but the water would hopefully stay warm. Which brought me to another observation. The water wasn't warm. It also wasn't cool. It was my perfect body temperature. It was basically wet nothing. I slowly slid myself onto my back in the wet nothingness, put the floaty ring under my head, and then I lay there treading water. She didn't tell me to tread water, and I didn't need to tread water, but good luck convincing my survival instincts of that. Seven minutes down, fifty-three to go.

I was tired of treading water, so I gradually stopped moving one body part at a time, until I convinced myself that maybe I really wasn't going to suffer the fate of the Titanic. That's when my mind started shifting to other points of observation. Other than the salt crystals drying to my chest, I felt nothing. Nothing. Other than the tiny wedge of light from the propped door, I saw nothing. And with my ears plugged and emerged under the water, you might guess I heard nothing, but I learned something about myself that day. I rely on my senses to distract me from the voices. (Don't even act like you don't have the voices.) So deprive me of my senses, and things in my head get very loud.

Regrets, hopes, dreams, worries, fears, my weight, if Dylan the car salesman hates me everyone might hate me, what I'd order for lunch if I made it out of the tank alive...you name it, I thought it. There was a whole party going on in there.

I can't live like that. So I sat up to make sure the door would really swing open in case of emergency, and then I started the whole process over again. Eighteen minutes down, forty-two to go.

And there I lay in a sensory deprivation tank. My limbs floating freely. Seeing nothing, and feeling nothing but the steady pressure of water squeezing against both sides of my head, and I began to sympathize with unborn babies everywhere. Cue the voices.
Babies, kids, grandchildren, hopes, dreams, worries, fears, my weight, self-loathing, what I wanted for lunch...Thirty-five minutes down, twenty-five to go.

Enough.
I decided to spend the rest of my hour taking a long leisurely shower and allow the sound of pelting water against my head to silence the havoc between my ears. If that wasn't enough, the blow dryer would surely finish the job.

So I sat up, swung open the door, and couldn't find the floaty ring pillow anywhere. I squinted toward the dark end of the tank, but no way I was going down there. Surely I'm not the first person who's lost their floaty ring pillow to the dark side, so certainly they have someone willing to float-crawl down there and get it.

I wrapped myself in a towel, walked back to the shower, and passed the mirror. 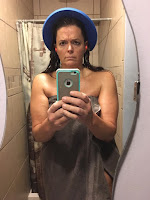