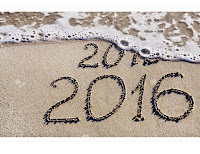 It's funny when I look back on Remembrance and Resolution, 2015, just putting my thoughts into words, and having no idea what the year would actually hold.

I had just blindly resigned from my massage therapy position to step into the world of freelance writing. I wrote, "I still don't know what that even means, but I know God told me to do it."

I described 2 images I felt God wanted me to carry into the new year. An anchor and a seed. The anchor to hold me steady through the waves of change and a seed held in my tightly clenched fist that I needed to let go of, because a seed is useless until you drop it from your hand and allow it to harvest.
I left it with the resolution to trust God completely.

I didn't really know what any of that meant, either.

Somehow, someway, in less than one year, God took me...a 44 year old socially awkward introvert, accustomed to spending several hours a day in a dark, quiet, massage room, which I was happy to do, since one of my biggest phobias was for people to look at me, (heaven forbid we relive the church fashion show fiasco of 2012)...and He thrust me onto a public writing forum, the size of which I never imagined or dreamed.

At least no one is physically looking at me, right?

But He wasn't done. Because in that same year, He thrust me in front of 6 Zumba classes per week, as the only Zumba instructor ever, to have to go deep inside her head, and pretend that no one is looking at her. Every.Single.Time.

Enter the image of 'the anchor', as God holds me tight through the raging storms of public opinion. One word. Yikes.

Because here's the reality. Both of those jobs comes with varying levels of controversy, as people have strong opinions about whether writing Satire and teaching aerobics classes centered around dancing to secular songs is "appropriate" or "inappropriate" for a Christian woman to do. And I really struggled with that. Until I read an interview with Carrie Underwood one day. She said, "Carrie is who I am. Carrie Underwood is my persona. Carrie would never really go to a bar to key the side of someone's car, but Carrie Underwood will sing about it." And then I thought about the impact she has on her diverse audience every time she openly shares her faith in Christ.

Now imagine my surprise, when the women in my Zumba classes befriended me. Like, really befriended me. Not just small talk before and after class. I'm talking texting each other throughout the week. Going out to dinner after class. Sharing rides that occasionally turn into deep conversations, as one woman I barely knew said to me, "I don't know why, but I feel like I can trust you." These women, whom I would've never met otherwise, who tell me how much I'm helping them, but who are actually the ones helping me. They're impacting my life. They inspire me to be more open...and maybe unclench my frightened fingers just a bit?

So enter the image of 'the seed.' Is it possible that God is taking my seeds of insecurity and fear, planting them in places where people from all walks of life gather, and growing them into a harvest of transparency and authenticity that speaks to the love and forgiveness that God openly offers to everyone? I don't really know. I just wonder if sometimes we as Christians unintentionally present ourselves on pedestals that people might have trouble relating to? I pray that if and/or when that begins to happen, that we're quick to seek humility, and remind ourselves that we're no better than anyone else, and trust me, my name is at the top of that list.

My remembrance of 2015: finally acknowledging that God is bearing fruit in my life. Too many deeply personal things happened to me last year to deny that the Holy Spirit is alive and working and that God is nowhere near ready to give up on my hot mess, despite all my shortcomings.

You see, once upon a time, someone said about me, "She doesn't bear any fruit." And I believed them. Turns out, we were both wrong. The people who believe that just have certain expectations of which fruit they need from me, and I assumed, because I wasn't meeting their need, that my tree was a failure.

But here's the deal. If you're expecting super sweet and popular apples from me, you're gonna be disappointed...possibly frustrated...and maybe eventually start to question my tree. Don't. God's tending it. My fruit might just be the kind that isn't as easily recognizable. Mine's more like the weird looking fig, or something.

What are figs good for? Don't ask me, but God created them, so they must serve a purpose.

My resolution for 2016: To stop wishing for apples, embrace the figs, trust Him to put me where He needs me, and then follow His lead, regardless of how unqualified I feel for the job.

So on a much smaller scale than Carrie Underwood, here's what I've concluded about myself:
Shari is who I am. Shari Courter is my persona. Shari would never really throat punch a shopper who got into the express lane with more than 20 items, but Shari Courter will sure as hell write about it.

As for Zumba, it turns out both Shari and Shari Courter enjoy sexy aerobic dancing to Pitbull songs...sorry if that ruins anything for ya...but then don't be surprised when, at the end of class, we're cooling down to songs like, 'Yours To Take', which is incidentally my theme song for 2016.

I'm thankful for each and every one of you who are part of my life, and wishing you all a very Happy and Fruitful New Year...
Especially you figs out there. You know who you are.

"Yours To Take"
~Jimmy Needham~

This is my second chance, this is no song and dance
You came in and renewed a right spirit
This is grace at its best
This is taking a restless, messed up heart and having you clear it

I was down for the count
I was up, but knocked out when I heard, "Pardon for the interruption"
Then like out of blue, out came glorious You
You picked me up without barely any introduction

You won my heart by a landslide
You tend to do that every time
So, everything I have is Yours now
Even my very life

Well, I've been captured by grace
I'm not going away
I'm Yours to take

Your kindness leads me to repentance
Leads me to the cross
Which leads me to forgiveness
So, I'm counting it all as lost