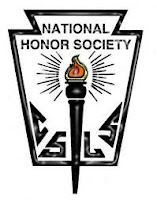 Our family + a stuffy banquet full of speeches = The perfect storm.

Add to that the fact that our 17 year old son was required to deliver one of those speeches and you've got potential for an evening that will go down in history.

As mentioned a few entries ago, Z made the National Honor Society exactly one month ago today. On top of that, he was chosen as one of 3 candidates to run for Vice President of the county wide chapter.

For the past several days, he's been busy working on a speech. My husband and I encouraged him to be himself and show his individuality by adding some humor. Yesterday at school he found out that the English teacher had encouraged the other 2 candidates to do the same and it confirmed we were on the right track.

Last night was the banquet. Z's girlfriend and I attended while my husband stayed home with our daughters. We were excited to be at our very first NHS banquet. We sat with a family who was attending their 3rd NHS banquet and they filled us in on how brutally boring the evening would be. Oh great. But we found out a useful tidbit of information: the kids in the NHS are the ones who vote. Good to know. The humor route should be a hit.

After dinner the families were dismissed into the auditorium. First up to give speeches were the 3 candidates for President. It was clear that all 3 were given the same advice of adding humor and the crowd politely laughed their support for all 3 students.

Next up, the 3 candidates for Vice President. As Z walked by me to take the stage, I reached out and took his hand and told him to go for it. And he did. He was the 2nd presenter and the only boy of the group. The girl before him took the serious approach and stood up there and read off her qualifications and the crowd politely applauded. Z got up and openly admitted that the girl's qualifications would be hard to compete with, therefore as a cook at Pizza Hut, he campaign promised some extra toppings on the pizzas of the kids who secured him their votes. It was cute and the crowd laughed their approval. Then he listed off a few of his accomplishments while adding a few more humorous comments and the crowd laughed their approval each time.

Something you might want to know about our family: If you laugh your approval, we'll keep going and we might suddenly take it to a new level. Be ready for it.

Then he listed his sports and activities and he ended with his ability to juggle.....and then he said, "Don't worry. I've been instructed not to play with my balls on stage." And the crowd roared and applauded the first kid in the history of NHS to mention his balls on stage. (His juggling balls, people. Get your minds out of the gutter.) And their approval went on for quite a long time. To the point where you could barely hear his closing remark, which was, "I'm not standing up here asking for you to vote for me, I'm simply asking you not to vote for them" as he motioned toward his opponents. And the auditorium went wild as my son exited the stage and kids and parents gave him high fives on the way back to his seat. He became an instant celebrity and when the kids began marking their ballots without yet hearing from the final candidate, I knew he'd just nailed himself the position of Vice President.

The rest of the evening I couldn't stop beaming with pride at this son of mine who used to be so shy that the thought of speaking to a large crowd would have never even been an option a couple of years ago. The thought of putting himself out there in a position to be judged by a group of his peers would have never happened.

Yet he's done it twice in the period of a month. The first time was during a church event when he hijacked the microphone and asked his girlfriend to prom and to accept his class ring in front of about 400 people. (Thankfully she said yes to both.) And last night he stood in front of an auditorium full of people he'd never met and delivered a fantastic speech complete with comedic timing. Yes, I was proud.

And as an added bonus, when his name was called to light his candle and receive his membership card, he did a round-off back-hand-spring across the stage. And the crowd woke up yet again.

When it came time to 'tap' the new Vice President everyone was on the edge of their seats to watch the inevitable. Everyone knew who was about to be tapped. So when the girl who delivered the first speech was tapped, everyone sat in stunned silence. Even the girl who had just been tapped. (As it turns out, she voted for Z too.)

Afterward, Z was surrounded by parents who were thanking him for making what is a notoriously brutal evening something to talk about and by all the kids who were confused because they'd voted for him. Clearly, there is some question about the voting system here. Obviously, there are powers that be who can override the decision of the very NHS members who are voting on who they want to represent them. Don't get me wrong, it's not that Z was better qualified than anyone else or that we're not happy for the girl who ended up winning.But last night, the people spoke and 'someone' took away their voice because 'someone' didn't like the final result. Nice message you're sending to the next generation.

To make matters worse, on our way out, Z approached his 2 teachers. Not only did they glare and refuse to speak to him, but one of them pointed and told him to get out. Not only was that horribly unprofessional, but a poor representation of someone involved in the National Honor Society.

Did he say balls on stage? Yes. Did he choose a different method to cross the stage to receive his card? Yes. Did he bring some life to what was otherwise a boring event much to the crowd's approval? Yes. And did he get penalized for it? Absolutely.

We're not sure what today will hold for him at school. Will he be reprimanded? Will he be kicked out of the NHS? Quite possibly. (Oh well, it was a good month while it lasted.) But the bottom line is, Z did exactly what was asked of him. He put himself out there, showing humor, individuality, and leadership. And that's pretty 'Honor'-able by our standard.
Posted by ~Sassy~ at 2:16 AM