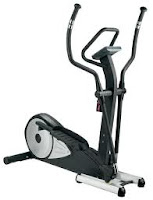 Up until I gave birth to C, I regularly worked out in a gym. Five days a week, I never missed a day, even all through my pregnancy. After C arrived, I realized it was going to be nearly impossible to keep that up with a newborn. So by the time she was seven months old, I decided I was going to have to improvise and bring the gym to me. I needed an elliptical machine.

Sears was having a big sale on all of their exercise equipment. One evening my husband and I left the kids at home and headed out to find the one I liked. As usual, it didn't take long for a salesman to latch onto us once he realized we were in there to make a purchase, and he was more than happy to take us around to let me try them out. After about an hour, I had it narrowed down between two and I could not make up my mind. Both had good things about them and the price was just about the same. My husband asked the salesman what the weight limit was on each machine so that he could try them out and help me decide. The salesman didn't hesitate and said, “Oh, at least 1,000 lbs.” So, he climbed aboard the first machine. This drew the curious eye of two young Mennonite boys who stopped to watch my Linebacker-sized husband attempt an elliptical machine. He started gently cycling the pedals and pumping the arm handles and it was going well. In an effort to seal the deal, the salesman encouraged him to take it up notch. On to level two he climbed. At the salesman's urging, (or taunting), it slowly turned into levels three, four, five, and six. At this point he was sweating profusely and the Mennonite boys were wide eyed and pretty impressed. Finally, the salesman said, 'Take it to ten!' and my husband, who is always up for a challenge, (or dare), obliged. That's when the pedal and arm handle on the right side flew off the front, just as the pedal and arm handle on the left side went flying off the back sending him straight down the middle in a giant split as his arms flew up in the air as if to yell 'Ta Da!'....except that's not what he yelled. The young brothers took off running in what I could only assume was fear for their lives or shock at the word they'd just heard. The salesman helped him to his feet apologizing profusely and blaming it on any and all stock boys employed by the Sears Corporation. That might have been part of it, but on further investigation, he was stunned to learn that he overestimated the weight limit by around 700 lbs. I'm sure he was equally as stunned when that's the machine I ended up buying. (But I demanded the five year extended warranty.)

As we were finishing up our purchase, my husband felt a light tapping on his back. He turned around to see that the two little boys had returned with three more of their siblings and one of them excitedly asked him if he could please do it again. He refused. Every party has a pooper.....
Posted by ~Sassy~ at 8:11 AM