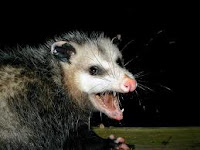 When you're considering purchasing a house, it's wise to look for signs of possible problems.....water marks on the ceiling, missing shingles on the roof, etc …. We looked for all of the obvious signs before we bought this house. So why the large 'critter trap' in the barn didn't send off warning signals is beyond me.

Other than our one neighbor, our house is surrounded by cornfields. In anticipation of a possible mouse infestation we found a farm with a 'Free Kitten' sign out front and promptly scooped up their last three kittens to live in our barn and eat the mice. Every evening I went out to the barn to feed and hold our new little additions. One evening when I opened the barn door I immediately saw two of the kittens and started petting them and talking to them. I was looking for the third kitten and heard the crunching of cat food behind me. As I turned, I simultaneously reached for the kitten. My eyes were telling me that something was terribly wrong, but my mind wasn't quite grasping it. Right before my hands wrapped around the kitten I realized it was a possum. I began to scream in hopes that the possum would leave and / or my husband would come running to my rescue. Wishful thinking because neither of those things happened. The possum continued eating and my husband continued watching television inside. I was being completely ignored by both. I ran inside and asked him if he heard me screaming. He told me he did and he figured if it was something important that I would come and get him. (Insert me grinding my teeth and glaring here.) I told him I almost picked up a possum and then stood there staring at him waiting for a big horrified response on my behalf. Why do I continue to set myself up for disappointment? Finally, I walked him through what was expected of him here. “Hey Chuckles! Here's the part where you go out and get rid of the possum."

With a giant sigh of inconvenience, he got out of bed. Z was already at the door, armed with two BB guns, excited for some Father/Son bonding in the barn. One was a rifle and one was a pistol. My husband slipped on his work boots and his ball cap. I guess now would be a good time to mention that the only other thing he was wearing was his boxer shorts. Ever seen National Lampoons Christmas Vacation? Introducing my very own Cousin Eddie and his pajama clad sidekick excitedly heading out to the barn to kill them some possum. I couldn't be more proud. I followed them to the door of the barn and 'Cousin Eddie' heroically turned to me and told me not to come in no matter what I heard happening in there. Uh oh. I warned him not to shoot Z or any of the kittens before they disappeared inside the barn and closed the door. I couldn't hear much of anything at first. Some clicks of the triggers, some scraping sounds, and muffled voices until suddenly my husband yelled for me to go ask our neighbors if they had a real gun. I took off to their house with the phrase 'Not Good Not Good Not Good' running in a repetitive loop through my mind. I was convinced that the possum had taken them by surprise and was holding my husband and son at BB-gun point and our neighbor would have to save their lives with a sniper shot to the head of the possum. Amazing how quickly your mind goes to irrational places.

We'd only known our neighbors for about six months at this point, so I can only imagine what went through their minds when I came pounding on their back door and asking if they owned a 'real' gun. He calmly asked me what the problem was and I tried to explain what may or may not be happening in our barn. He put his hand on my shoulder and said, “Let's just go take a look before we get any more guns.” Good call.

He and his wife followed me over to our barn and pulled up the large sliding door on the front and we stood there in silence. The possum, who was peppered with BB's that were barely stuck into his fur, was glaring at my boys but continued to eat away at his pile of cat food completely undeterred. Z was standing on top of the workbench, in his pajamas, with the BB gun rifle cocked against one shoulder as he silently continued to stare down the scope at his target. Finally, and most shockingly, my husband (aka; Cousin Eddie) stood there in hat, boxers, and large black work boots with the BB gun pistol in one hand and a shovel in the other.....our neighbors must have been so happy we bought this house right about then.

Dan patiently explained that this was probably not the best approach and that a critter trap would be a better idea. Aaaahhh....the critter trap....it's all making sense now. Dan was kind enough to help him set it up while the possum continued on with his meal and watched. And probably rolled his eyes, but whatever.

To our pleasant surprise a possum full of BB's was in the trap the next morning. My husband told me he would take it to the lake down the road and set it free. Great. We continued to reset the trap and every morning a possum awaited us and he would transport it down to the lake. Perfect. Until one morning our neighbor noticed him getting ready to transport a possum. He had been tying the critter trap (with possum) to the luggage rack of our mini van before driving him to the lake. So he informed him that it's illegal to 're-locate' wild animals, and although everyone does it, it's not a wise idea to draw attention to yourself....ie; blatantly tying them to the roof of your mini van.....(I would love to know what people must have thought when they saw our possum-covered mini van flying 60 mph down a State Highway.)

But now we know that our barn is prone to possum infestations. Having neighbors who walk us through the customs of country living has been a priceless gift that we, and the entire community of possum, greatly appreciate.

Ironically enough, the elementary school I attended was Possum Middle School where I proudly cheered for two years. Needless to say, I no longer root for possum…....who, by the way, have been upgraded from the roof of the van to the back of the truck......
Posted by ~Sassy~ at 6:57 PM