DON'T ASK.....even if you're convinced you can tell. 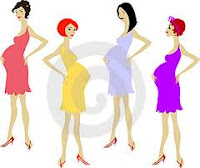 My husband is notorious for asking women when their baby is due.....and then stammering around while the not-pregnant woman stands there crying. I think it's safe to say he'll never do that again after the day I was on the receiving end of that question several years ago.

I was in Massage School and most of my waking moments were spent stressing about being in Massage School. But one Saturday afternoon I was in a rare care free mood as he and I shopped through Meijer. While he headed toward the milk, I turned to stand in line at the deli and was met by a man who worked there and he was holding a large tray of cookies. When I declined his offer of a free cookie, he responded, "It's okay to splurge when you're eating for two." I'm not sure when he realized his mistake, but I suspect it was somewhere between the look on my face and the moment I tipped his giant tray of cookies into his chest and burst into tears and took off running to find my husband. (Fear not, there is no shortage of drama around here.)

My husband saw (and heard) me coming and of course asked what happened. Through hiccuping sobs I told him that the cookie man thought I was pregnant. Remember that shift in his eyes I mentioned right before he snaps? When he realized that his peaceful cheerful day was now ruined thanks to one cookie man, that look came into his eyes and he calmly asked, "Where is he?" (Head's up: The calmer he talks while his eyes are in shift mode, the faster you should leave the area.) In hindsight it's kind of funny that his first question wasn't "What the h*** is a cookie man?"

I told him to forget it and take me home. As we passed two employees sweeping up a mess of cookies he asked, "I don't suppose you had anything to do with that?" And pushed the cart a little faster as I silently cried through the checkout and all the way home.

Now I have to come clean and admit that last year I broke the major don't ask rule. We were eating dinner at our favorite Mexican restaurant. We eat there often and I thought I knew the employees pretty well so when the waitress came to take our order I didn't even think before asking, "When did you have your baby?" (If you really think about it, my form of the question is actually a compliment, right? Couldn't that mean I thought she lost weight? In reality it was because her belly had that 'I just released a baby' look to it but she doesn't need to know that.) Anyway, she said, "No baby" and then an awkward silence hung over the table while my family left me hanging out to dry....and I prepared to have a tray of chips and salsa dumped on my chest and I would have totally deserved it. But thankfully between the language barrier and the fact that her sister had recently given birth I was saved from my own mouth.