My husband and I met our senior year of high school. He was a football player and I was a cheerleader. Classic fairytale that all girls dream of. It doesn't even matter that we went to totally different schools or that we met after the football season was over, so let me live my truth and don't be a fairytale ruiner, k?

All of that to say, I never got to see him play football or cheer for him on the sidelines, which would be like, the hottest thing ever.

BUT. THEN. All of that changed with an email inviting him to play in his high school alumni tackle football game against their rivals, the alumni of the Kenton Ridge Cougars. *cross self and spit here*

Flash back to 2011 when my alumni was invited back to cheer for the Homecoming game of the Shawnee Braves. *And the crowd goes wild*

WHOA.
WAIT.
My husband was being offered another chance to play football for the Northeastern Jets against the Kenton Ridge Cougars?!? Which means I was about to wear my boyfriend's jersey on game day?!? Bucket list complete. Works out well that we still have his original ripped up team jersey, blood stains and all.

He started to ask, "Do you think I..."
Let me stop you right there, because I'll have my old cheerleading uniform on before you can even finish your question. And with that, he signed up.

Their first scheduled practice was several weeks away, so he started his own version of training. Mainly playgrounds, rough housing, and tubing...cuz ya gotta be able to "take a hit."

The day of practice, someone in the group text asked, "Anybody have a ball?" Surely a foreshadowing of how this was about to play out.


He pulled up to the first official practice in badass mini-van fashion, with the sunroof open, and probably blasting Def Leopard, if you'd be so kind as to extend me a little latitude while I add my own touch of hotness to the visual.


Everyone gathered on the field where he was told he was the 2nd oldest player signed up. Oldest guy was 67. No problem there though, considering the youngest guy informed the group he has a heart flutter and has to lose 10 lbs before his doctor will clear him to play, so there's that.

Someone brought some half deflated balls. (Insert your own jokes here, because I can't narrow mine down to one.)

No coach yet, but I vote the guy with the old balls step up.
Sorry, I couldn't help myself.

If I haven't offended anybody yet, stick around.

Here was the breakdown of the team:

Ron- Offensive and Defensive tackle, because 'hot' and 'can take a hit', remember?
Older Than Ron Guy- Didn't actually show up to practice, but would probably be the Receiver, assuming his wife agreed to sign the waiver. No lawsuits here, folks.
Heart Flutter Guy- Running Back...pending those pesky 10 lbs.
Ankle Brace Guy- Center...under debate, because Knee Brace Guy was also vying for that position, but when Ankle Brace Guy persevered after taking them off because blisters started to form, he earned some major kudos.
Knee Brace Guy- Punter and Field Goal Kicker and Center wanna-Be. (Someone might have control issues. Also, not to micromanage, but maybe Older Than Ron guy might be better suited to kick a ball and suffer less risk of getting tackled. BUT...he never showed, so here's to you, Older Than Ron Guy...good luck Receiving.)
Healthy Guy- Offensive Guard...but also had an 8:30 bedtime, so the 2nd half of the game would go unblocked. Obviously unavoidable.

Wait, no Quarter Back? What the hell, Knee Brace Guy? Where's your skill set? And why does the movie, The Replacements, come to mind?

Anyyyyhooo, that first practice consisted mainly of driving the sled, trick plays talk, and possibly a locker room huddle and some, 'How strong are you? Too Strong! You want a victory?! I want a victory!!'...because Remember The Titans. Also someone asked if they could bring alcohol, which I'm pretty sure still violates school grounds rules everywhere, but I can't blame him for wanting to tap into some liquid courage before the big game.

Later that night, when I found him massaging his shoulder in our hot tub, I voiced my concern that maybe this alumni game isn't a safe idea. He told me not to worry because Emergency Squads from 3 surrounding townships would be on standby, which wasn't as comforting as he might've thought. But he assured me, he was game ready.

And this is where the story abruptly concludes. The opposing school couldn't get enough alumni to form a team...which truth be told was probably the only thing that stood between some middle age guys and a new Dyer Garafalo Mann & Schultz commercial: "...if you or someone you know suffered injury or death because of the negligence of your high school's alumni association..."

Thankfully, nobody needed a tiger on their side, because Cougars saved the day. Thanks Kenton Ridge. 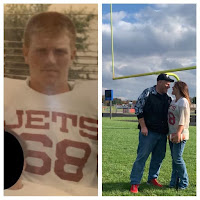 Nothin' sayin' I can't still wear his jersey on game days, though.