You might remember a few years ago when Zac and I went skydiving together. It wasn't my idea, but rather a follow through to a commitment I'd made to him when he was 8. Also the fact that if one of my kids is jumping out of an airplane, I ain't waitin' on the ground to see how that ends. For better or worse, I'm in this parenting thing for the long haul.

It ended up becoming a spiritual event in my life and I told Zac I'd do it again with him sometime. 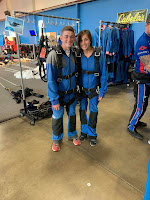 They ran a Valentine's special and Zac purchased jumps for he and his wife. He asked me if I wanted to join them. Welllll, maybe, but I didn't wanna be the third wheel in a special moment between him and his wife. I mean, he's still my boy, but he's her's too. And let's be real. She's first now, as she should be.

Months passed and they booked their jumps for August 10th. He asked me again and this time I agreed to go. Then came the 2 week saga of trying to book my spot. It began with a continually glitching website and ended with Ron calling and feeling "sassed" by the girl who answered the phone, so he refused to call her back. (Welcome to my world of dealing with the "Coffee Maker Normans", there Chuckles.) So, armed with my best 'Good Cop' persona, I called the place back, smoothed things over for him, and arranged for him to speak with a different girl who promised not to sass. Sigh. The role of Bad Cop is much more my forte, but I'm nothing if not versatile.

My spot got booked. Unlike last time, I wasn't nervous about the jump at all. I just figured I already knew the outcome. I mean, it wasn't exactly an easy process for me to get booked, meaning I was probably going to die on Saturday. Not that I made any important decisions or official proclamations, except I did refuse to go to the doctor when it started to burn when I pee because why bother when I'd be dead soon, and I told Ron a few things he might like mentioned in my eulogy...like, my aversion to dramatics.

Hey. I'm too frugal to waste money on a doctor bill when he'd have a funeral to pay for and it's my eulogy, so it's important he get it right.

We all showed up on Saturday, given our tour, and explained the meaning of all the numbers on the light up name board by a girl who talked really fast under her breath and had no business explaining anything to people who are about to jump out of an airplane from 13,000 feet. Also she's probably the girl who sassed my husband if I had to guess. The only thing I understood was when she asked if we had any questions. I said, "Could you repeat everything you just said?" Barbara cut in and dismissed the girl before she could answer. I assumed that meant that Barbara had understood the girl, so when she walked away, I turned to her and said, "What'd she say about the light up board?" Barbara replied, "I have no idea, but I couldn't take one more minute of her talking."

Ooookay. So my daughter in law has even more in common with me than I realized.

It was 6pm when our names appeared under the green number 120. We all speculated what that meant, since fast-talking-sass-girl didn't talk clearly enough to understand. Zac figured it was the plane number. I wondered if it might be how many minutes before our jump and Zac said, "Two hours?! Stop." Then we all laughed, because we were hungry, and the thought of waiting 2 more hours would've put us into a full on hangry-rage. It was obviously our plane number. And then our "plane number" dropped to 90, then 80, and 60, and we finally admitted that that's how many minutes left before we jump. We should be detectives or something.

We were starving. Had I only known, I would've enjoyed one last meal. Dying on an empty stomach just seemed cruel. It was approaching 8pm and I wondered if we were about to skydive in the dark of night. Probably best my husband and 12 year old not witness me plummet from the sky and bury myself 4 feet into the landing field anyway.

My TI, (Tandem Instructor), Matt was SO NICE!! He triple checked my harness and seemed pleased when I pointed out that my legs were through the harness holes. When he interviewed me for the video and asked if there's anything I'd like to say, I hesitated, but decided against asking him if he knows Jesus and telling him we might be joining Him together in about 20 minutes. I need to find a balance between bold and clinically insane. Fine line there.

We loaded into the plane with a bunch of other people, both tandem and single flyers. One single flyer sat confidently by the open door, even as the plane began to ascend. Maybe he thought he was gonna die too, and was planning his roll out if things went south on take off. 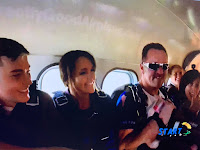 I was at the other end of the plane squeezed in beside Zac. I leaned over my son and said to his TI, Jacob, "Get my boy down safe, ok?" He replied, "Your boy will be fine. I have a lot more experience than your TI." He was probably being funny. I just knowingly nodded. I had the new guy. It was all coming together.

Within a matter of minutes, we were all on our TI's laps while they hooked us together. I felt complete peace, despite my underlying urge to apologize to my TI for drawing the short straw and being strapped to the woman destined to die that day. Suddenly, the door opened and the single flyers starting dropping over the side, while the tandem flyers were slowly inched toward the door by their TI's. The order of the jump would be Barbara, me, then Zac. It wasn't until Barbara was positioned on the ledge of the open door that I saw the look of complete terror on her face. All I could say was, "You're ok, Barbara! You got it, Barbara!" Thinking, please don't let her see me speed by her in a free falling death spiral.

She went over the side. 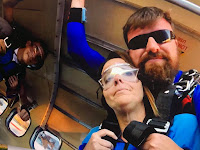 My turn. He pulled my head back, reminded me to put my feet on his butt, and over we went.

For as much as I expected to die that day, this flight wasn't nearly as spiritual as my last one. For example, I'd completely forgotten that it feels like your eardrums might rupture and you can't breath for that first 30 second free fall, but you can't look like you can't breathe, because camera on the TI's wrist, so you wave and blow kisses and pray to God that you reach the breathable altitude before you get the panic eyes and start flailing, because my feet were still firmly planted against Matt's butt and the last thing I wanted was to be kicking it when we slid into the light. Insult to injury and Matt doesn't deserve that. 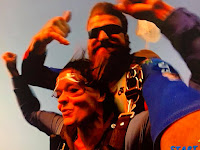 But there's no disguising my face skin flapping wildly in the wind, which is probably the same as how I'd look if I didn't like food so much. Guess we'll never know.


Then our chute opened and suddenly I could breathe. It was that moment I realized, unless we get randomly struck by a giant bird or tangled in some unlikely electrical wires, me and TI Matt were going to live to see another day.

I asked him if my boy's chute was open, he looked up, said yes, and pointed him out to me. That's good. Cuz if his chute didn't open, I would have no choice but to throw an elbow into the nose of super nice TI Matt, unsnap the parachute line, and spiral out with an unconscious Matt on my back to meet Zac on the other side. Glad it didn't come to that.

Time to sit back and watch a sunset from a view I never have before...which was basically a glimpse of heaven, so maybe my premonition wasn't completely wrong.

He handed me the chords to steer us and I thought maybe we shouldn't press our luck, huh? But he assured me I couldn't mess it up. So naive, that one. 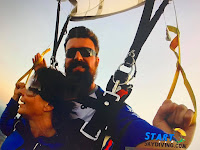 I asked him if we could land on our feet, because that would be a super cool ending to celebrate us not dying and everything. He said we're landing on our butt. I told him last time I landed on my feet. He said this time we're gonna land on my butt. Matt clearly didn't understand how close he came to dying that day. 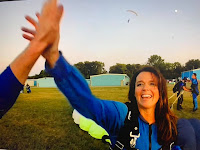 As Matt unhooked me, he asked, "Will you do it again?"
If my boy asks me to, I will.

Then he asked, "What are you gonna go do now?"
Eat a porterhouse, drink a margarita, and then look into why it burns when I pee. 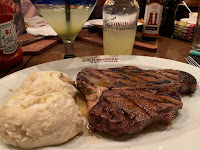 He might've thought I was kidding. 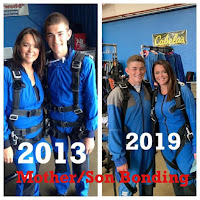 Thank you for another adventure, Zac and Barbara.
Say the word if you're up for doing it again...in another 6 years or so. 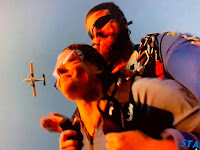 A HUGE THANK YOU to Matt, Jacob, and everyone at Start Skydiving.
Their professionalism, safety standards, and personal care for their jumpers is 2nd to none.
You might wanna have somebody else answer the phone and give the tours, though.
Just a suggestion.