When we left off, Ron had decorated our house in white Christmas lights and I'd apologized for not finding a wrench because he has two tall toolboxes beside two different garage doors and I'm the bigger person. There. You're officially caught up.

The following morning, I was greeted with the beautiful lights on the house, glowing in the dark of the early morning, when I walked outside to climb into my mini-van (because the mystery death smell did indeed go away), to leave for my annual appointment with my gynecologist.

Granted, you don't really need to know I was on my way to the gynecologist, but considering what happens next, I think knowing I had to then turn around and go get cranked open and violated with a super-long q-tip should garner me a bit of sympathy, so please keep that in mind.

As a cradled my steaming travel mug of coffee, I was gazing up at the lights, took my foot off the brake, and began backing out.

No, I wasn't looking behind me, because why should I? Nothing is ever behind me. It's my driveway. Yes, my new van has sensors that began beeping, but it's also always beeping right now because my oil needs changed, so maybe my mini-van should stop crying wolf. And since you're probably wondering, yes, there is also a camera view that appears on my dash when I'm in reverse, but again, I was looking at Christmas lights, in my own damn driveway, and why do I feel harassed by you right now?!?

When I crunched into something, I snapped out of my Christmas trance, jumped out of my van and that's when I remembered. My daughter Aubrey left her vehicle parked in our driveway the evening before. A luxury, fully-loaded, vehicle. Also, it's not actually hers, but a rental. Probably should've led with that. And I had just scraped the dark burgundy paint off the side with my new van.

A Christmas season laced with profanity. My wish list complete.

So I started frantically rubbing it with my hand, because that obviously makes paint grow back.

Then I gave up and left for my pap smear.
(Your sympathy would be appropriate right about now.)

As the doctor walked me back to the exam room, she asked, "How's your day so far?" And then before I could answer, she followed it up with, "Well, I guess it's only 7:30 in the morning, how bad could it be?"

Oh, you'd be surprised.
So I told her I crunched into my daughter's luxury rental car, then she stood me on the scale, and then took my now hypertensive blood pressure because that's what those people do there. It's almost like that system should be fixed.

On the way home, I called Ron. He told me he'd take care of it and then he earned major supportive husband points when he said, "I almost hit it this morning, too." Then it occurred to us that I should call Kearstin and warn her not to hit it when she left for work. And then I went ahead and texted Zac and Barbara, because what if they decide to come over and ram into it a few times, too? Can't be too careful in our family.

I also broke the news to Aubrey's husband, who took it like the patient and understanding champ that he is, and then he mentioned that Aubrey should have never parked behind me in the first place. I knew I loved that guy.

Later that evening, I came out of Zumba to find a text from Ron that he fixed the rental car.
Wow, how?
"Spray paint."

Remember that part in Meet The Parents when he spray painted the dude's cat and you sit there covering your eyes because you just know that's not gonna end well? Welcome to my life.

Apparently calling our insurance company and filing a claim would've been far too easy. And legal.

For future reference that I hope you never need, spray paint from Walmart will never dry to match the color of a luxury rental vehicle...unless it happens to be Pepto Bismol pink, in which case, maybe.

He worked on that thing for several days and then returned it to Aubrey who looked at it and wasn't convinced. Neither was I. Then he explained his options of either returning it in the dark of night...or he could spray paint the whole car...and that's when I put my foot down. It was time to call in a professional.

My daughter-in-law voiced her concern that it might go against the rental agreement to allow a professional to paint a rental car before returning it. I pointed out that it was probably already breaking the rental agreement to crash into it with a mini-van and spray paint it, too. Some ships have already sailed, my dear. Best just get on board at this point.

Dylan gave him the number to their detailer, Ron scheduled it to get repaired, took 2 hours vacation time, and drove an hour to get there, and then the detailing guy said he didn't have time to do it.

Ron was fuming and everyone involved should rejoice that I wasn't the one who took it there to get fixed, as was the original plan. The odds of me bursting into tears would have been astronomical.

So it sat in our driveway untouched, undecided, and due to be returned to the rental agency whenever they called.

In an unrelated twist, Caymen arrived home predicting the rapture because she heard trumpets at school and she was pretty convinced it was Jesus and not the high school band.

As Ron sat contemplating driving the car through the cornfields to "dust it up," Caymen was explaining to him that Jesus is on His way to pick us up.

Ron replied, "Well, He better hurry, because I need Him to get here before we have to return that car."

So. The rapture hasn't happened yet.
BUT. As it turns out, perfectly timed snow and dirty road salt are an effective disguise for a scraped up, spray painted, luxury rental vehicle.

And you don't believe in Santa. Psh.

...over salt on the roads,
under hard falling snow,
back to the car rental place they did go.
They dropped it off in the dark,
and then sped outta sight,
Merry Christmas to all,
and to all a good night!
﻿ 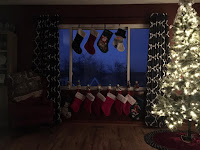