A Tale Of 2 Titties- Part I 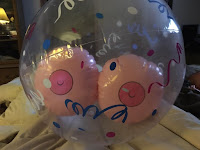 But I'm getting a Bilateral Breast Augmentation and Mastopexy w/ Silicone Implant Placement. (aka; a boob job.) Actually, by the time you read this, I will have already gotten my surgery and am possibly wavering between succumbing to a medicated stupor and staying alert enough to fight off my husband from being overly involved in the post-op care, stemming from curiosity and excitement, laced with his natural need to torment the hell out of me.

But let's not get ahead of ourselves.

Wednesday, June 29th
Many of you followed my Mother Tucker series, documenting my tummy tuck recovery process back in 2013. So I was surprised when I began questioning whether or not to document this one. I mean, boobs are kinda more personal, and let's be honest, this filler-picker-upper procedure opens myself up to the potential for a whole lot more gossipy judgment than the tuck did, therefore, I feel the need to explain this one a little more.

So why am I getting it done? I'm tired of taking off my Victoria Secret push-up bra and hearing the smack of 2 half empty water balloons bounce off my tummy, not to mention what they look like pointing straight down to the floor or swinging wildly about of their own volition. I'd prefer doing Zumba wearing one sports bra, rather than three. I want the option to wear strapless dresses. And for those who suspect this has anything to do with feeling good when I'm naked in front of my husband...you're damn right it does.

It's not that I don't appreciate the ones God gave me, but my children broke them and my husband and I would like them fixed now. End of story.

As to why I finally decided to blog it, I can't not blog it. It goes completely against my nature to hide, especially out of fear of judgment or gossip, and just like the tummy tuck, there are women out there who want this done, or had it done, and keep it a secret, because of that very judgment. So, here I am, ladies. If you're curious about the process, if you fear what the recovery might entail, have questions, or had it done and would like a support system...here I am. Ask me anything. We can be breast friends.

And yes, prepare yourself now for the countless variations of the words breast and boobs in the days to come. You're welcome.

Up to this point, the process has entailed several pre-surgical consultations. I chose the same doctor who did my tummy tuck, because I trust him. Ron demanded to come with me to my first appointment, because he was convinced that we'd get to look at a catalogue and "choose the new nipples." That marks the first and final time he was permitted to attend any appointments with me and/or say words out loud to the doctor, before my surgery. He spent the remainder weeks googling and sending me pictures that I was instructed to show to the doctor, which of course I refused.

Not that I exactly appeared normal to the doctor all the time, either. As a joke with Ron that first visit, I put my little paper vest on with the opening in the back instead of the front, but the doctor surprised me by coming in the room and as I tried to casually switch it around, it loudly ripped and I stood with half a vest on each arm with my boobs fully exposed. The first words out of the doctor's mouth were to his nurse when he told her, "She's struggling." Okay, struggling is dramatic, but I could maybe use a new vest.

We learned that there are 4 levels of sag, depending on severity. Guess who's a whopping 4. I never do anything halfway. And just an FYI, smiling and saying 'cheese' wasn't necessary when they were taking the before picture for my chart. I might have a few idiotic tendencies.

(((Things are about to get slightly personal and possibly even more uncomfortable, with frequent mention of nipple. Feel free to skip the next 3 paragraphs or don't complain that I didn't warn you.)))

The doctor and I had in depth discussions on my desired outcome. If I just wanted bigger boobs, he could throw some giant implants in to fill up the skin I've got and call it a day. NO. So, I'm going to require implants and a lift. If I wanted a nice average C cup, that of which I haven't seen since 7th grade, it'd require more skin removal, thus increasing the odds of losing my nipple(s). Seriously. Lost nipples. Um, NOOOO. So he predicts I'll remain somewhere in the D cup range when it's all said and done. In the surgery room, he'll have a variety of silicone implants to choose from, ranging in size from 450cc's to 520cc's, and there's a 'magic number' he'll know once he gets me on the table.

I've explained to him my intentions: I want breasts that are back up where they started, pointing in the right direction, and proportionate to my body size. No bigger than when I'm wearing my VS push-up bra, but also no smaller, because I have a husband that'll be sitting in the waiting room, whose already threatened to roll me back into surgery himself if they're reduced by any level. We're easy like that.

There are risks. Despite his best efforts, I could literally lose a nipple, and have been instructed to call the doctor immediately if we see any signs of trouble during the first few days of recovery. I could also lose sensation in one or both nipples, similar to how I still can't feel my belly button 3 years later. I'll have incisions on the outside of each breast as well as one resembling an anchor that will run below my nipples and along the underside. Scarring can be a concern and there's no guarantees how well those will heal.

Of course, I have other fears. He explained that during the surgery, they'll be sitting me upright to make sure everything is in the right place, so now I can't stop thinking about scenes from Weekend At Bernie's and wondering exactly how many people it will take to prop me up, heaven forbid a stray implant flop out onto the floor. On top of that, last week, Ron woke up in the middle of his colonoscopy, which means that now I'm pretty sure I'm gonna wake up naked on the surgery table to everyone cursing the strain of lifting my dead weight into an upright position. While these concerns sound ridiculous in the light of day, they seem totally legit at 2am. Every night.

As for recovery, I'll be down and out of everything for at least a week while I have stitches and drainage tubes and I'm forbidden to lift anything or do any form of exercise for 4 weeks. That's all I know as of today, which is 2 days before my surgery scheduled for Friday July 1st.

But from this point on, I'll be blind blogging. I have no idea what to expect or what, if anything, I'll have to report on a week to week basis. My best case scenario, is that it'll be the most boring series in the history of blogging, because the surgery and recovery will go soooo smoothly.

If you decide to tune in for this, your best case scenario will be that I experience some of the freak show crap that happened after my tummy tuck, and you'll be highly entertained at my expense for a few weeks. Our history proves, the odds are ever in your favor.

Plot twist. Well, that didn't take long, now did it?