As I posted before, we remodeled our kitchen over the Summer, and drama ensued, because that's who we are. So to my amazement, when we took that project a step further and spent the months of October and November knocking out 2 kitchen walls to create an open floor plan with our living and dining areas as well as laying wood flooring, I had nothing major to report...other than the fact that my Zumba income was paying for this remodel and for 7 weeks, I lived but one stray staple in the foot away from the entire project coming to a screeching halt. But all in all, it went smoothly, until the very end when Lowes (again) couldn't match our paint for touch ups. Every paint we tried was just a shade off and we faced the dreaded task of repainting the entire upstairs living space because there were literally no stopping points. So...we created some stopping points. Look closely and you'll see some random pieces of wood trim. Look too closely and you might see like, 3 different shades of burgundy around our new island. 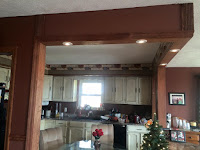 Having miraculously completed that project by Thanksgiving, Ron thought we should go ahead and tackle the last room on our remodel list. The rec room. He decided on an Ohio State theme, which provided lots of ideas for him for Christmas. He came home with his "charcoal grey" paint, but I looked at the color swatch and said, "That's blue." And he said, "Nuh uh!" and I didn't argue because when a grown man says 'Nuh uh!' he's obviously right. Two hours later, he rolled it on and yelled, "It's bluuuuuue!!!"
Nuuuuh uhhhh.
Grey/Blue...Ohio State/Michigan...what's the diff?
But with the floor installers scheduled to come Monday, the room was painted blue, and he moved on to ripping up the carpet. Sunday night he asked me if I'd touch up the paint. No problem. He said, "The can is on the outside freezer." What he failed to mention, is that there were TWO cans of blue paint on the outside freezer. I spent the next hour retouching every spot on every wall and then went to bed. The following morning, 10 minutes before the floor installers were scheduled to arrive, I went in the rec room and found this. 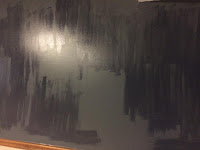 What.The.HELLLLLLL????
I immediately sent Ron a picture and he replied, "Did you stir it?"
Did I stir it? Did I STIR it?!? It looks like somebody wiped Cookie Monster's dead rotting carcass all over our rec room walls and you wanna know if I STIRRED it? I think the issue's bigger than that.
﻿
The floor guys arrived and I had no choice but to take them down to the room where one guy looked at the walls and said, "Wow."
Um, you don't get to say wow to me, SIR!
The other guy asked where all the flooring is. I told him the garage. And then he told me they wouldn't be able to lay it for 48 hours, because it's cold and it should've been stored inside.
So I stood there deciding which one to punch first and then the 'wow' guy spoke up and offered to bring the wood inside before they left. Apparently my scary vibe was in full throttle.
I spent the next 2 hours repainting the entire rec room with the right shade of blue, and for 2 days straight, we ran electric heaters to help warm the wood. So when they arrived this morning, we discovered that the heaters had blown a breaker and our rec room had no electricity. And then the 'it should've been stored inside' guy asked me which direction I wanted the wood to lay and when I told him I'd call my husband and ask, he said, "You can't make that decision yourself?" and then the 'wow' guy said, "You saw what she did to the walls."
So nobody wants to make it outta here alive, is that what I'm hearing?
They're laying the floors now and I began blogging this in hopes that by doing so, nothing else could possibly go wrong, but then the screen door handle broke, the flooring guys got locked out and the UPS guy showed up with a delivery and thought they were breaking into our house, so screw that plan. Let's just none of us be surprised if there's a Part II to this nightmare.
In the meantime, the blue rec room cancelled my ideas for the Ohio State decorations I'd arranged to get my husband for Christmas, so I hatched a secret plan to order him an X-Box...but then after Thanksgiving dinner, all the guys went on a shopping trip together and bought themselves X-Boxes and now this is what my bedroom looks like every evening. 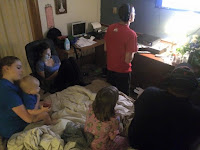 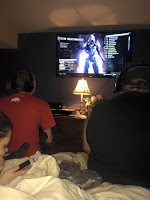 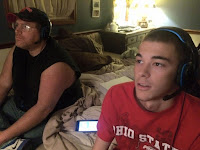 So Merry freakin Christmas to all...
...and to all a good night.﻿