If you've followed my blog, you might know we had 3 dogs. 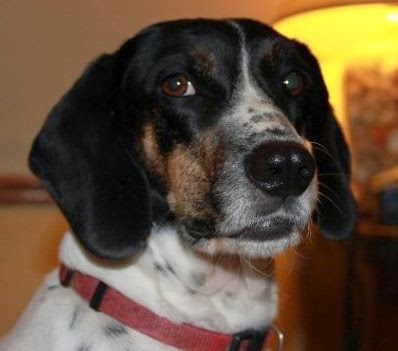 Summer, the high-strung Beagle/Dalmation we cleverly titled, Balmation.  A rare breed, if I do say so myself, which made it surprising when the Vet highly recommended we have her fixed so as not to repeat that again.

Quincy, the 13 lb Llassa-poo...a Llassa something mixed with, well, poo.  Notorious for bringing us carcass parts from our surrounding fields. 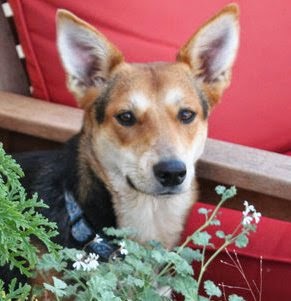 And then we had Caymen's beloved German Shepherd, Axel.  Or as Caymen pronounced it, Asshole, thus disqualifying her from Kindergarten show 'n' tell last year. 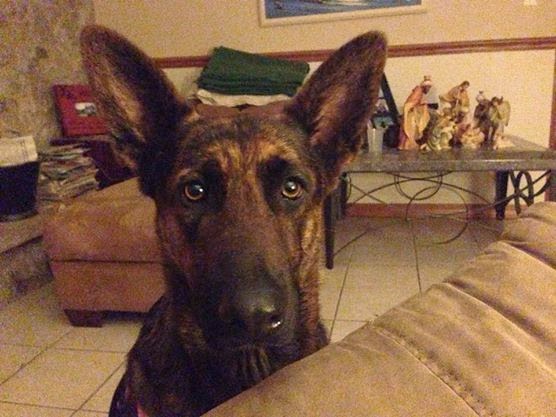 Axel was tragically hit and and killed by a car in November and Caymen's heart was broken.  We thought we'd found an acceptable replacement we named Rosey.  She was much darker than Axel and Caymen immediately noted that "she looks like a muddy a-hole."

Unfortunately, Rosey hated Quincy.  We had Rosey for a 5 day period of time that spanned my tummy tuck recovery and the details are blurry, but I vaguely recall a horrific scene on our bed involving Rosey, Quincy, Caymen, Kearstin and Ron, as I sat drooling in a Vicodin induced stooper from the safety of my recliner.
Rosey was returned to her previous owner.

We decided that maybe we didn't need a German Shepherd, after all.  That is until BFF, Lissa, told me about the litter of German Shepherd puppies her Mother-in-Law was selling.  (You might've noticed the starring role Lissa plays in many of my life's....adventures.)

Two weeks ago, Tia joined our family.  Ron chose her name.  He wanted it to sound "feminine and simple."  Code for; can't be mispronounced and/or mistaken for profanity, as visions of show 'n' tells danced in his head.  Who could've predicted that Caymen wouldn't be able to remember the name Tia and ended up telling her 1st grade class that her new puppy's name is Ta Tas.  (We're not really cut out for show 'n' tells anyway.)

That brings us to what happened last Friday.  Tia had been in our home 9 days.  At 1pm, exactly one hour before the first of my afternoon massage clients was scheduled to arrive at my home, I found all 3 dogs excitedly gathered around something in the kitchen.  I shooed them away and saw an old box of rat poison.  A now empty box of rat poison.  Oh...nooooo....and I grabbed my phone.

The veterinarian's elderly secretary had barely finished her friendly greeting when I rambled the situation hoping she'd understand my rush of words.  When she responded, "Oh...dear..." I knew I'd gotten through.  The first recommendation was to bring them in immediately, but we live an hour away.  No good.  That's when she told me what I'd have to do.  Cue the super low slow mo voice effect when she said, "In-duce vommmmmitting."  (This had all the makings of the bathroom scene when my tucksticle fell to the floor at Caymen's feet after my surgery.)

For those of you who've never been required to induce vomiting on all 3 of your dogs simultaneously, and I can only assume that's pretty much all of you, here's what I had to do.

Forty-five minutes, 7 hydrogen peroxide doses, countless piles of decon-filled vomit, 4 bitten and bloody fingers, 3 traumatized dogs, 2 cancelled clients...and a partridge in a pear tree later...I was sitting in the grass crying for the dogs who'd taken off deep into the fields refusing to come to my calls because clearly Satan had stolen mommy's soul.

I waited a week to write this because, you know, I had to make sure I had an accurate ending.  I'm pleased to report that all the dogs are still alive.  They have to take pills every day for another week that neutralize any effect of poison that might've gotten into their systems before I...um, got it out.  They seem to have forgiven what I did, although they are certainly no closer to forgetting it.  Let's just say, I'm not welcome to give them their pills...or treats...or water.  Basically, they refuse to ingest anything from my hand.  I understand.

As for my inconvenient last minute massage cancellations, they understood.  Clients generally frown upon being rubbed with bloody fingers and noises made from 3 violently heaving dogs is not equivalent to relaxing nature background sounds.

People can be so picky.