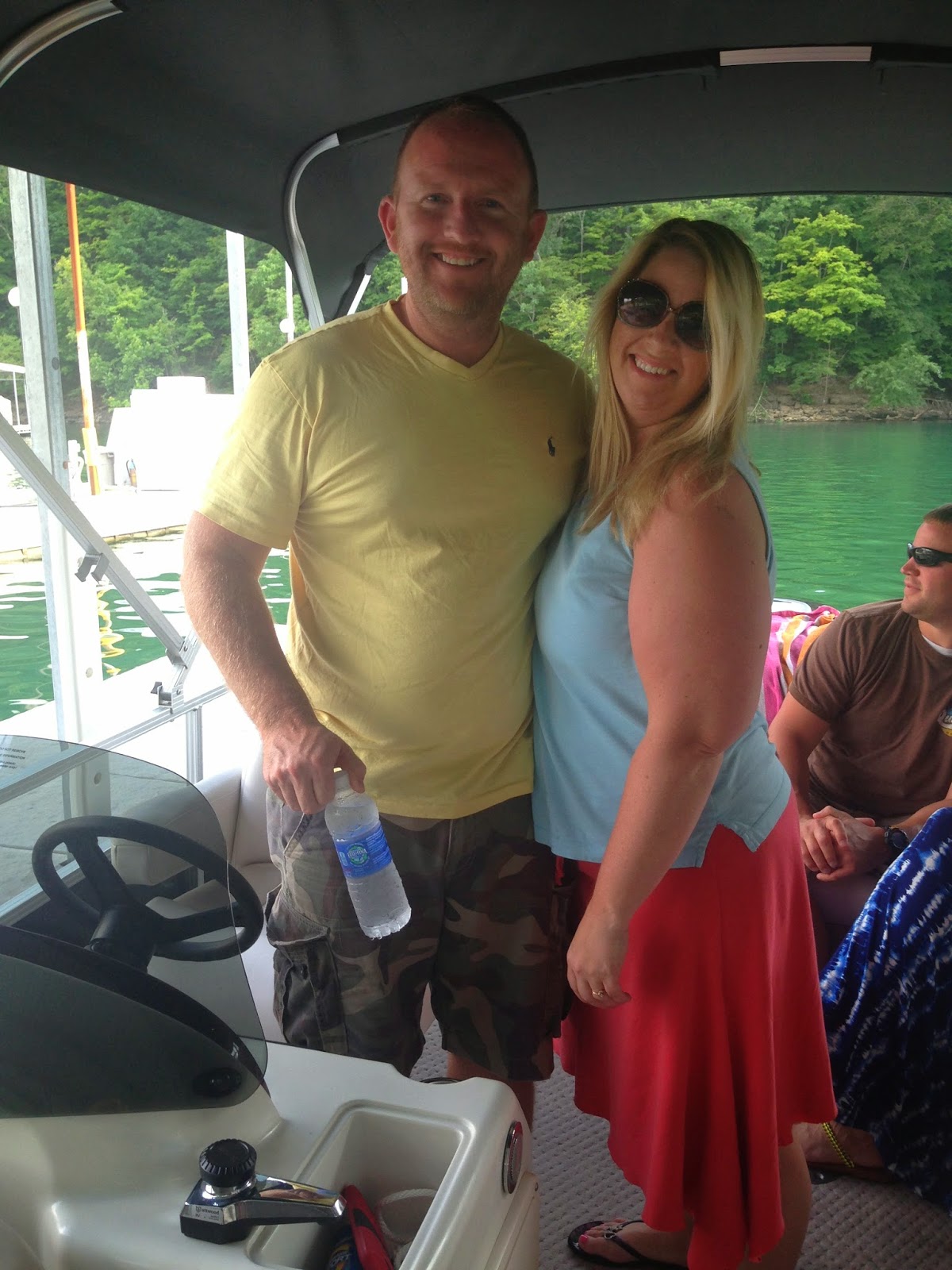 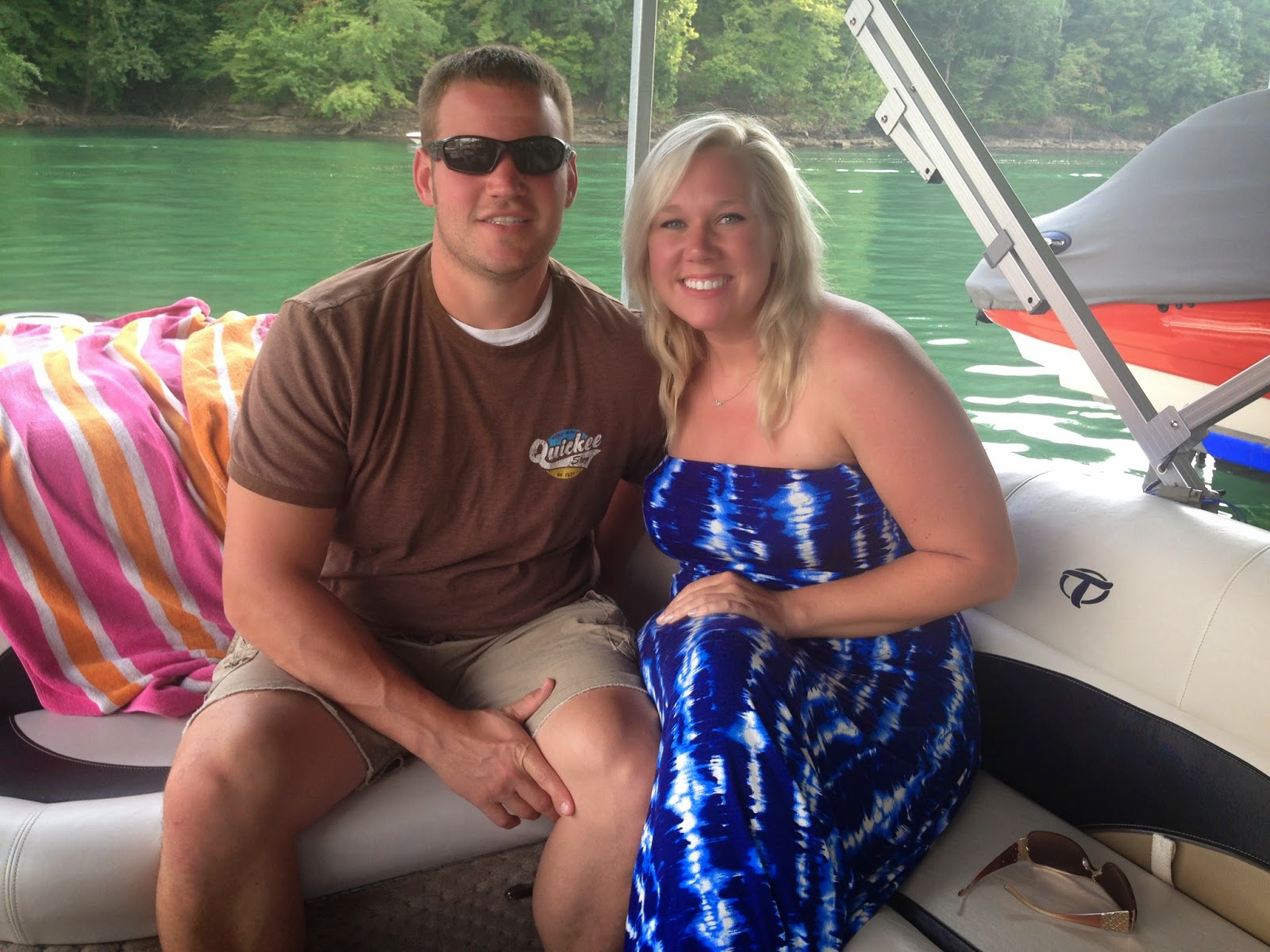 Sometimes I wonder if we're naturally drawn to people like us or if our ridiculous tendencies just rub off on the people around us.  This question arose again last week when we traveled to Tennessee with our friends, Lissa & Andy and Chad & Melanie.

Chad's dad generously allowed us the use of their home as well as his pontoon boat for a long weekend of fun on Dale Hollow.  He had but one request.  "Don't let anything happen to my brand new anchor."

Seems simple enough...unless you've met us before, in which case you know your anchor is pretty much screwed now.

The first day out on the lake, we found a private little cove and we dropped anchor.  We spent the next several hours swimming and floating on rafts.  At one point Lissa said, "Is the boat getting closer to the shore?"  Ron answered, "No, we just swam around a corner", which might have made sense if the cove had a corner, but nevertheless, we swam on without a second thought.

Lissa's concern proved valid when we swam back toward a boat that had clearly run ashore and whose front was currently resting on dry ground.  Andy and Ron got to the boat first and delivered the news.  "The anchor's gone."  Ok, that's bad.  But the rope's gone too, so if the rope floats, that's good.  Turns out, the rope doesn't float.  That's bad.

We aimlessly swam around the vicinity where we thought the anchor was thrown, occasionally diving down in futile attempts to reach the 16 ft bottom.  No anchor. 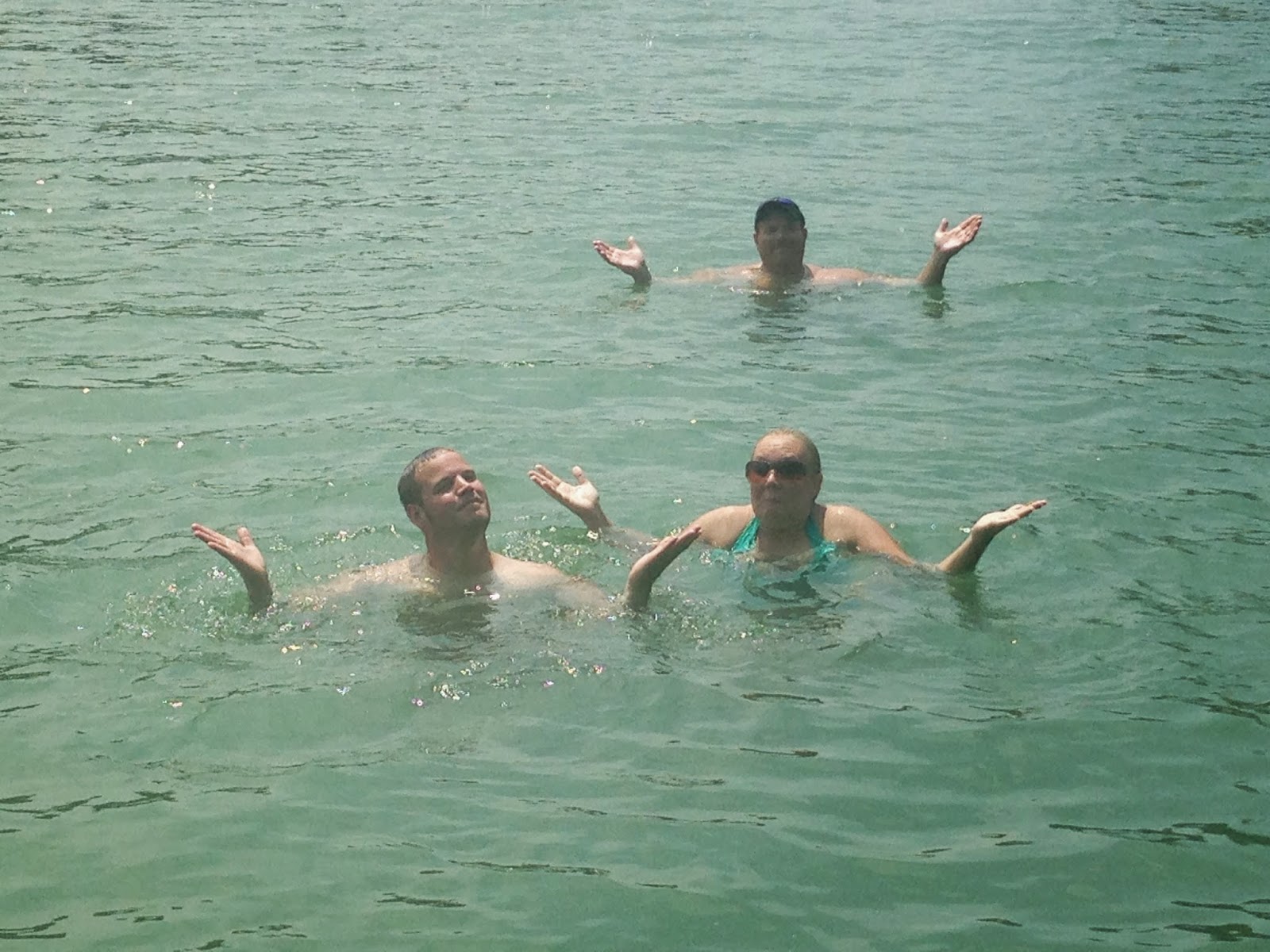 Then we sat on the boat discussing the stupidity of a rope that doesn't float, which briefly led to the idea of running a series of tests to see what other parts of the boat don't float, then we tossed around suggestions that were not only few, but highly improbable of being effective, one of which was to "call the dam" leading into a conversation about whether or not there was an actual "dam office" which naturally escalated into a series of inappropriate knock knock jokes, serving only to delay the matter at hand and solved nothing while we sat on the beached boat.  But far-fetched as it seemed, a plan was eventually hatched. 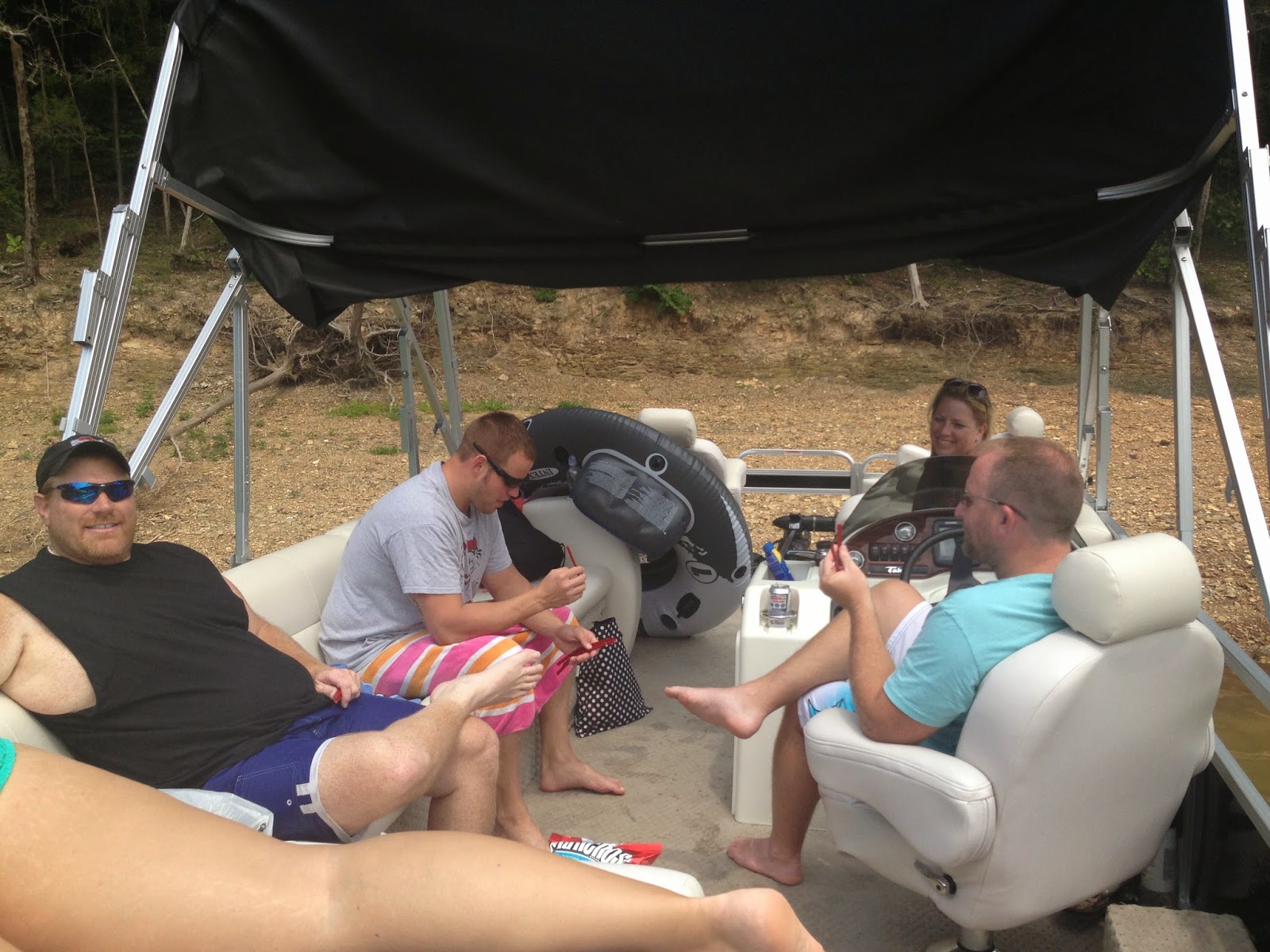 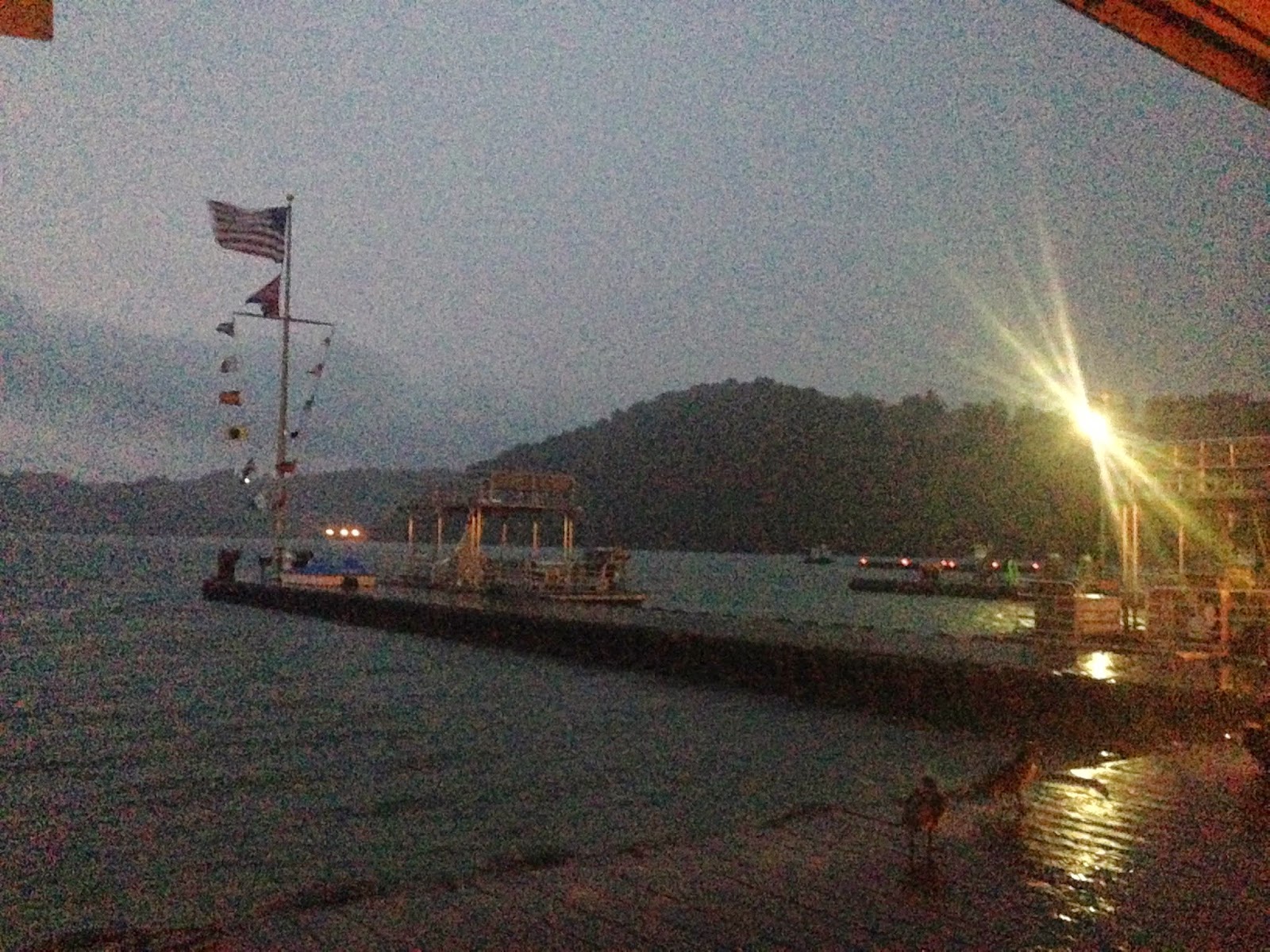 We went back to the house to get ready for dinner and took the boat back out for the 30 minute ride to a restaurant on the water.  While we were eating, the storm blew in.  I'm talking torrential storm here.  After dinner we sat sheltered under an overhang on the dock periodically commenting that "it looks like it's passing" and "the worst is over."  Lies, all lies. 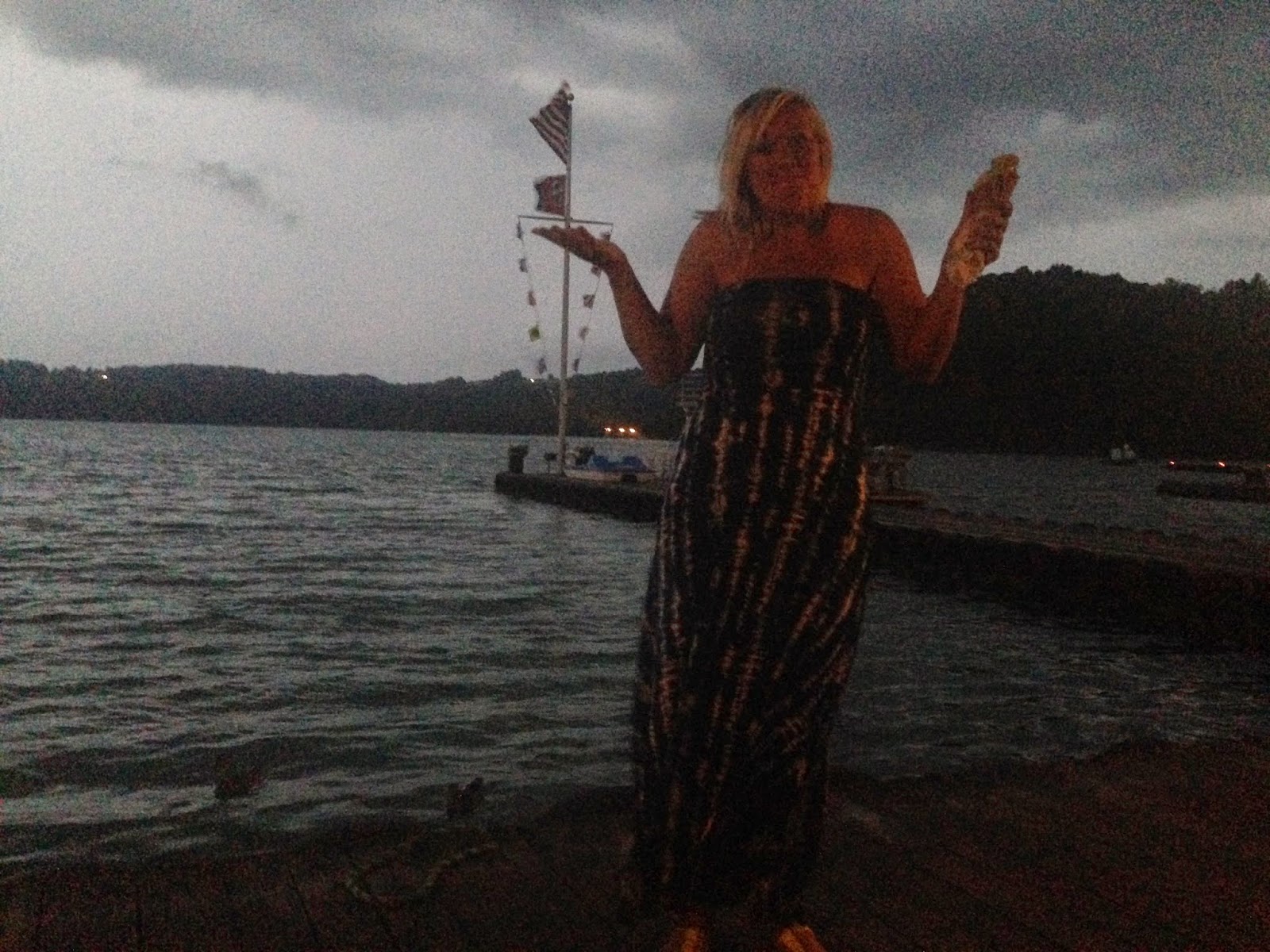 We finally decided we had no choice but to get back on the boat and brave the trip home in the dark of night, lit only by the frequent strikes of lightening, to the point of secretly questioning if Chad had recently refused to go to Nineveh and briefly contemplated throwing him overboard to see if that calmed the storm.

The following morning we headed back to the cove.
Operation Get That Anchor Back, was underway.

Unfortunately for us, a family had already anchored into our cove for a day of swimming with their small children.  Unfortunately for them, we were undeterred by common courtesy and proceeded forward with our mission.

So just for fun, let's switch perspectives as I describe what they saw from their boat.

They saw a boat full of people park nearby, completely disregarding proper boat etiquette.  Three women got comfortable sunbathing on the back.  Three men got busy on the front.  One man repeatedly threw an anchor into the water and then pulled it back in.  Another man repeatedly cast out a fishing line with a giant hook on the end and reeled it back in.  The 3rd man was behind the wheel of the boat and slowly drove back and forth and round and round, while 80's music blasted from the boat radio. 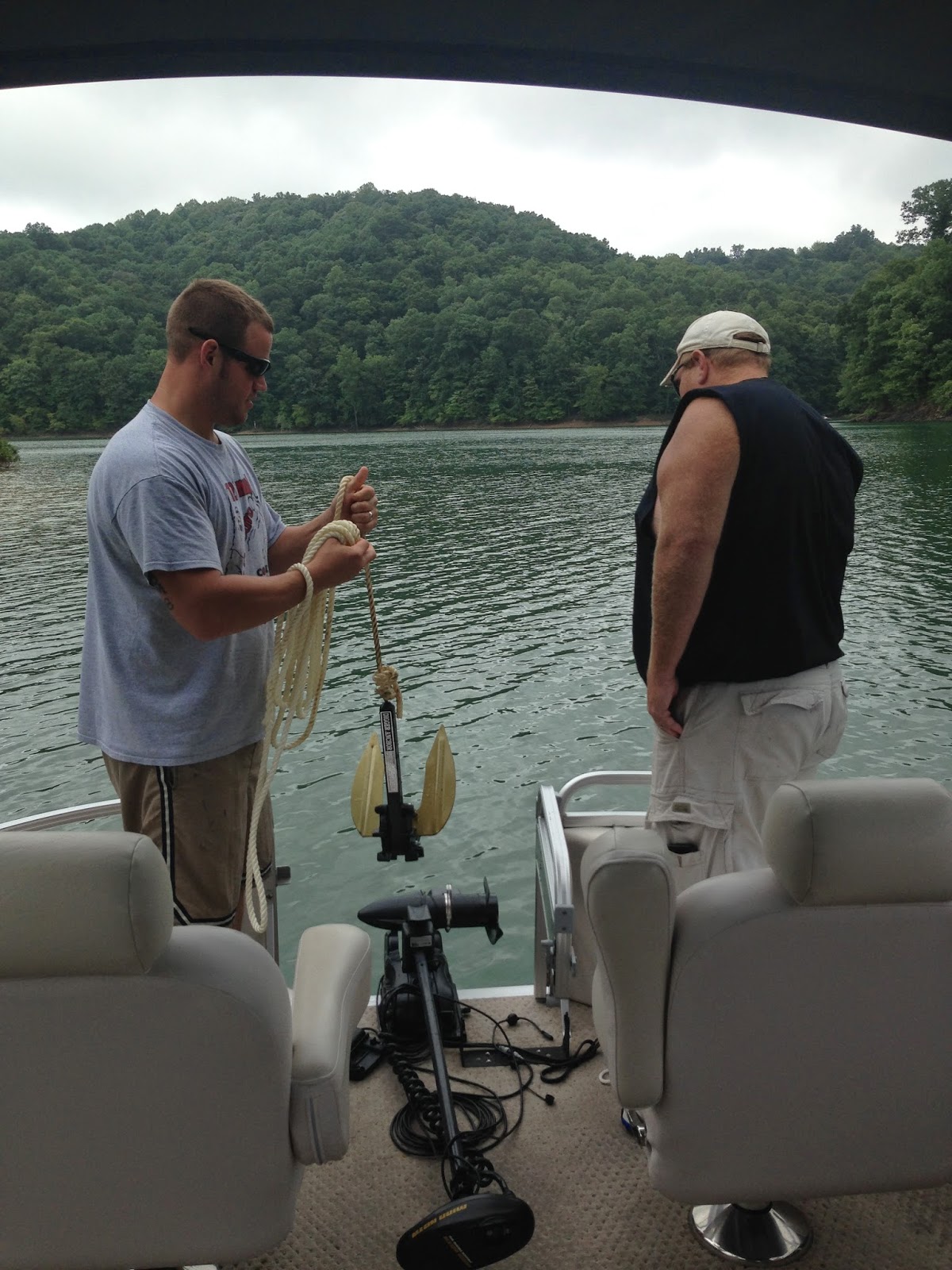 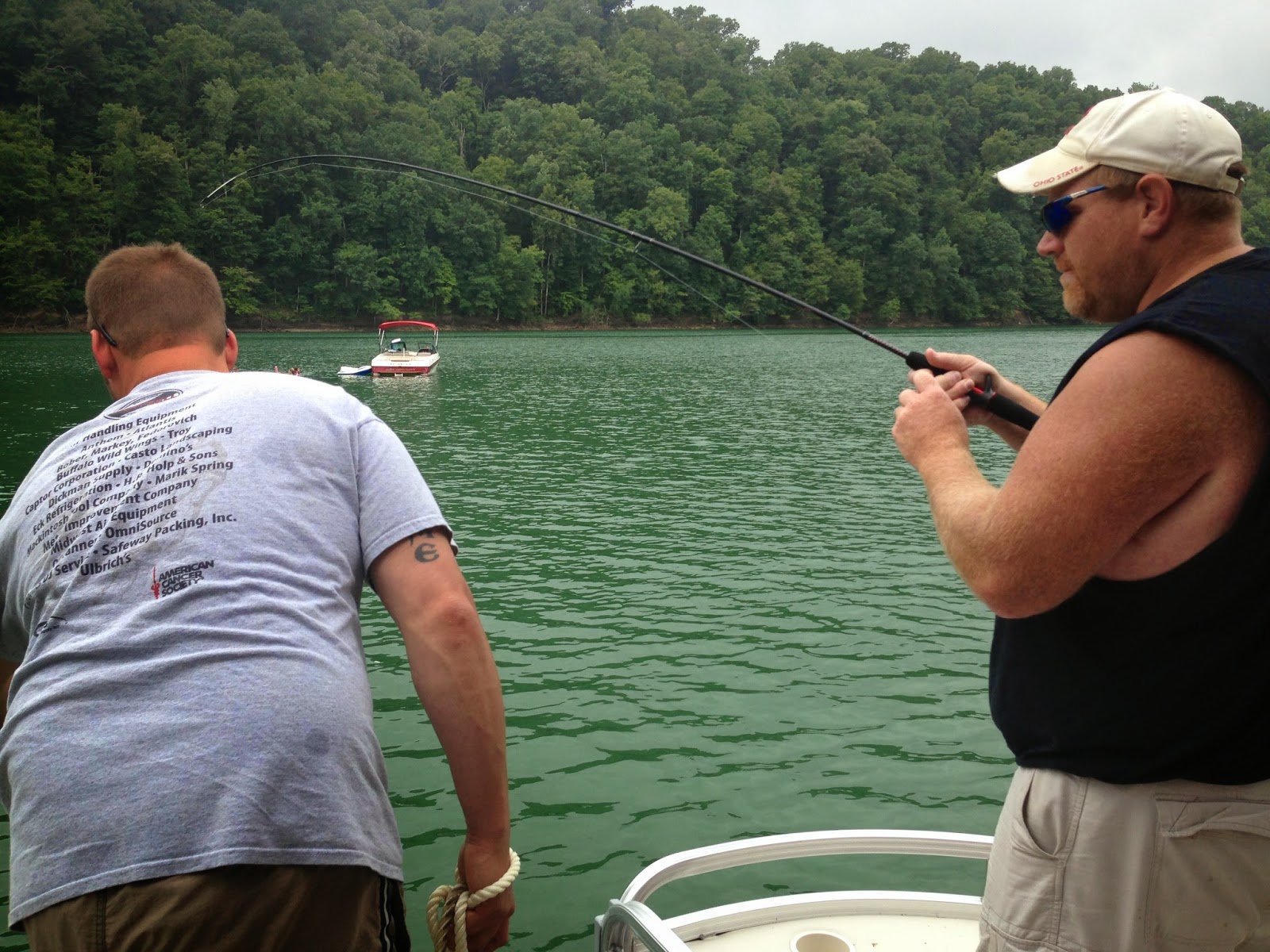 It needs to be said, if I were the family on that boat watching, I'd have been pissed.  To their credit, they stuck around either to stand their ground or to see what this freak show might do next.  And were they in for a treat, because about an hour into this brouhaha, they witnessed the man with the fishing pole scream "I'VE GOT SOMETHING" and then the man with the anchor jumped immediately overboard followed by his screams of "DON'T HOOK ME" and then every person in our boat erupted into cheers and celebration when they pulled an anchor attached to a long rope out of the water as 'Eye Of The Tiger' blared from the radio.  (You can't make this stuff up, people.) 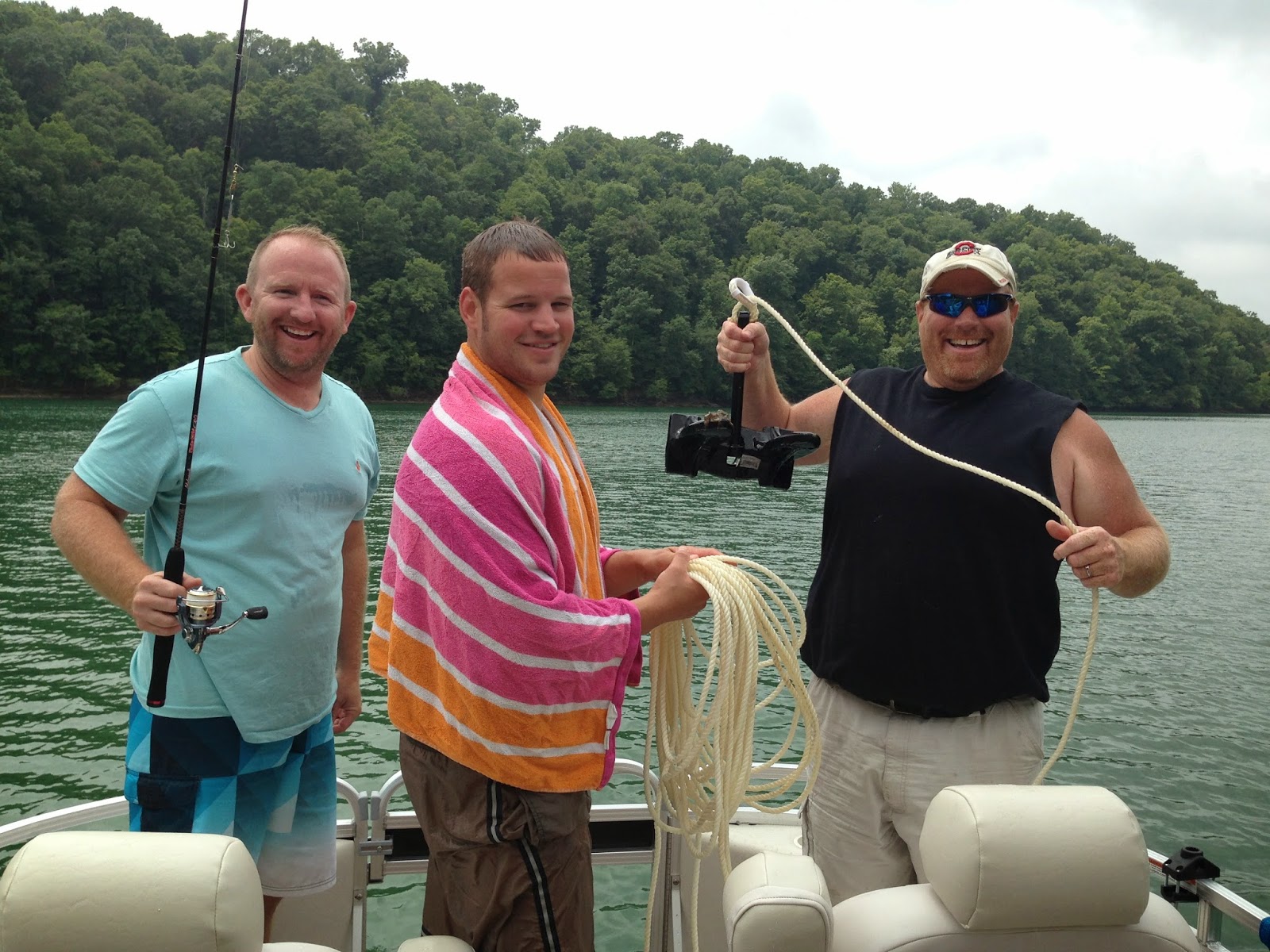 ...and then they saw the guy who reeled it in turn around and throw the anchor and rope overboard again as the women screamed, "Noooooooo!!!!"

To which he replied, "We tied it off this time.  We're not idiots."

By the looks on their faces, the family on the other boat strongly disagreed with that statement.