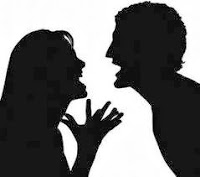 We were long overdue.

It's been months since our last major blow out worthy of a title,  reminiscent of the 'Worship Your God Fight of 2003' and the ever popular 'Shirt vs. Shirt Battle of 2012.'

As is usually the case, we didn't see this one coming, but in hindsight recognize the groundwork that gradually led to the 'Bible Verse War of 2013.'

Welcome to a peek into the Funny Farm, kids.  We call it home...

It all started at church when I happily returned from the coffee bar to my husband's side with my fresh cup of caffeine to learn that he'd (once again) volunteered me to pass the Communion plates and Offering bowls because in his words, "It's good for me."  Nothing against Communion and Offering, it's just that I always manage to make a mess of it from nerves (read: phobias) of being one of the few standing, while everyone else is sitting, and the subsequent hot flashes and shaky hands when one of my inner voices continually taunts me with the possibility of dropping the tray of 50 tiny cups of grape juice into someone's lap.  That's never happened, mind you, but it's quite common for me to screw up the pattern of passing and end up on the receiving end of my husband's disappointed looks when he gets stuck juggling 2 trays of juice and 2 trays of bread while I stand empty handed on the opposite end giving him the 'what did you think was gonna happen here? gesture.  The sooner he stops with this sick Public Humiliation Therapy, the better off we'll be.

Believe it or not, I still didn't see the fight coming.

We listened to the awesome sermon on living by faith and not by fear where it was pointed out that despite Peter's doubt that caused him to begin to sink in his attempt to walk across the water when Jesus beckoned him, at least he had the courage to step out in faith, unlike the other 11 who stayed sitting in the safety of the boat.

We've been wanting a black leather recliner for the rec room and I'd really like to have it before my tummy tuck next week, so I was thrilled when he suggested we make a trip to Value City Furniture after church.  We'd been in the store a whopping 10 minutes and all we could find was groupings of brown leather until I heard Ron yell, "Hey Shar!  There's a black family down there!"  I looked up to see him pointing toward the grouping of black leather chairs he was referring to, but unfortunately, there stood an African American family looking back at him.  We left empty handed.

Now I started to see it coming.

So on the ride home when he tried to change the subject from what just happened, to the sermon we'd heard, my day's frustrations rose to the surface and I called him a 'Boat Sitter.'  Boom.

His defense:  "Nuh uh!  I've been faithfully giving money to K-Love every month for a year and a half without telling you!"
Me:  "Excuse me?  You've been what?!  Why?!?!"
Him:  *with deer-in-the-headlights face* "Um...because the Bible says that when you give to the needy your left hand shouldn't know what your right hand is doing!!"
Me:  "First of all, K-Love isn't the needy.  Second, I'm not your freakin left hand, we're supposed to be one flesh and you shouldn't keep secrets from your own flesh!"

A hush fell over the mini-van.  Ha.

We arrived home and went our separate ways.  I went to bed, he headed to the bathroom.
Twenty minutes later, he came into the bedroom and said, "Oh, by the way, your tummy tuck is sinful."

He flipped open his bible to Leviticus 19:28 and proudly read, "Do not cut your bodies for the dead..."

Note to self;  Thou shalt not kill.