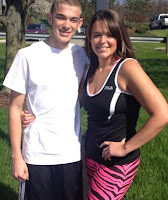 As you might recall, I swore off Tough Mudder after Kentucky.  But several factors changed my mind when considering Tough Mudder Ohio.  It started with my son deciding to try it and asking me to join him...and then the deal was sealed with Lissa's description of super-glamorous hot pink and black zebra striped yoga pants we'd wear.  I'm weak, okay?

I also had in my mind all the wonderful lessons God taught me and barriers He broke me through during that long trek in Kentucky.

Aaaaand according to the Tough Mudder website, if you complete 2, you get bumped up to 'Badass' status.  How could I pass the chance to add another title to my professional resume?

But the bottom line is this; Tough Mudder is a lot like childbirth.  You miraculously forget the pain when you sit and stare at that tiny, but perfect and totally worth it....orange head band.

When will I learn that not everything is quite so simple?

The problems began for me when I had to start back into 6-day-a-week training and the few times Z joined me, I ended up gasping for air while he skipped along beside me asking what I was cooking for dinner.  Shut it till I can breathe, Junior.  Shortly after that, he decided to focus on rest and carb intake.  Must be nice.

If you read my previous post, you know that the song, Redeemed, became like God's hug to me and it played repeatedly all the way to Kentucky.  So it should have raised a few red flags when I didn't hear it once on our drive to Mansfield, Ohio and was forced to decide that God sent 'Eye Of The Tiger' in it's place.  Don't judge, it's all I had.

The event itself was much like Kentucky except flatter, 10 miles instead of 12, and more running, less crawling.  The big difference for me on this course was that we would be running and then hit big sections of deep mud that would suck the run out of me.  As for the obstacles, many were the same so we knew what to expect.  When it came to the ice tank, the 2nd worst after electrical shock in my opinion, my husband and I came up with a game plan.  He'd go first and I'd start across when he reached the other side of the barrier in the middle, I'd give him my hand under the wall and without hesitation, he'd drag me under it to the other side regardless of any fight and/or refusal on my part.  Let's just say we both lived up to what we agreed to do and my head disappeared under the ice as I was yelling, "NO!!!!  I changed my...."  gasp.

Unlike Kentucky in October, which reached a high of 48 degrees...maybe...Ohio in April was mid-sixties, sunny and beautiful!  So that's what I focused my mind on when my right ankle started rolling.  Repeatedly.  Run, ankle roll, run, ankle roll, run, ankle roll.  Get the idea or should I continue?  As annoying as it is to read, imagine living it.  I knew I was but one ankle roll away from protruding a bone and I suspected God was up there going, "This was not my idea, girlfriend" and at the 8-mile mark when I pulled my groin muscle, I'm pretty sure He threw one of these:

Yep.  I pulled my groin.  Or as Lissa likes to say, I sprained my vagina.  In Kentucky, I injured my shoulder.  Let me go on the record as saying, Vagina trumps Shoulder.

The last 2 miles of the course was pretty much lost on me and it was all I could do just to make it to the end.  So when I arrived at the final obstacle, the live electrical wires you have to run through to get to the finish line, I over-thought it, freaked myself out and tried to go around, only to be told that I couldn't finish if I didn't do it.
And then I burst into tears.
If that's not 'badass' I don't know what is.

In an absolute demonstration of sacrificial love, Lissa and my husband, who'd already gone through the electrical wires and completed the course, appeared by my side and went through them again, with me and for me.  John 15:13 in action, peeps.  "Greater love has no one than this, to lay down one's life for one's friends."  Or run through live wires containing 10,000 volts of electricity twice, which is basically the same thing.

Somewhere in the middle, I got hit several times in a row, went down in the mud and ended up crawling to the finish.  Instead of a blaze of glory, I went down in a blaze of electricity and crawled away with a sprained vagina and an orange head band lopsidedly wrapped around my mud caked head.  Mudder-ly humiliating.

'Badass' or no, this course kicked mine.

So here's my take away from this experience:
1.  Twelve hours after a Mudder, a 19 year old boy will complain of a blister...a 41 year old woman will be unable to lift herself off the toilet by her own power.
2.  God does not hug with 'Eye Of The Tiger.'
3.  Two similar situations can have two very different results depending on if you're led there by God or by the dangling bait of hot pink zebra pants.
4.  The reason you forget the pain of childbirth is because hospitals offer epidurals...Tough Mudder does not.

Next up:  Throw Momma From The Plane, in T-10 days.  I'll know which way it's gonna go depending on which song I hear on the drive down there.

Get thee behind me, Eye Of The Tiger.